Last week I went to Las Vegas with three instagram friends. One of my dreams was to go to Las Vegas once in my life with friends along Route 66 riding a red Mustang while listening to new retro wave music. This trip gave me the opportunity to cross some of the stretches of the historic route. In particular, the part that we traversed is the one that crosses part of Arizona through Seligman.

Route 66 was part of the original interstate highway network of the United States until the appearance of great highways. So it represents a historic route that alone supported all the populations that crossed. With a distance of almost 4,000 kilometers from Chicago to Santa Monica, it is the main street of the United States or mother of all roads.

I wake up at 6 in the morning. Despite the typical excitement that comes before making a trip for pleasure, I have slept like a child. The bed is uncomfortable and the room is small enough to bother my friends, who still sleeps. An hour later I decide to get up, put on my shoes and a jacket in the dark and go down to the street to smoke.

I'm still in my pajamas when I walk through the door of Chinatown and into a universe of luxury. I decide to return to the hotel. I go back to bed and after awhile my friends wake up. We go for breakfast in a Starbucks. It is amazing what has changed this street in three hours. Right now it is crowded with people and traffic.

Suddenly the Mac Store appears before us, a paradise for apple fanatics like me and my friends. We enter it. We touch for the first time in our lives an iPhone while one of my friends decides to buy an iPhone.

We sit in a cafeteria and have some orange juice. At 7:15, a missed call on my mobile phone announces that the driver waiting for us at the hotel, who has offered to take us to Las Vegas for a reasonable price. I distributed the hours of pleasant travel evenly between sleeping and taking pictures of the unconscious passengers who slept in their super reclined seats.

After visiting some souvenir shops and taking some photos with some historical characters, we continued our way to Las Vegas crossing the Valley of Death. Las Vegas, far from being a sin city is part of the great state of Nevada. We spend the rest of the trip, taking pictures of the clouds through the window.

After crossing the desert from the Grand Canyon and passing near the Hoover Dam that supplies water and electricity to the big city in the middle of the desert, we entered the Las Vegas Strip. It is one of the most photographed avenues in the United States, and probably the third most famous avenue in the country after the Hollywood Walk of Fame of Los Angeles and Fifth Avenue of New York.

The largest hotels and casinos in Las Vegas, and in fact 18 of the 25 largest hotels in the world, are located on the Las Vegas Strip. The casinos that can be found following the Strip is in the direction of Fremont Street, where the oldest casinos are located near the Stratosphere Tower.

We enter the main street in the middle of the afternoon seeing the psychedelic panorama. We see themed hotels set in ancient Egypt, the Middle Ages, volcanoes and even one with its own roller coaster.

The hotels are so mammoth that our bus was swallowed by our hotel. We were going to stay at the hotel and to stop, our bus went down to the basements that are below ground level, where the entrances to the big hotels are and buses can stop to drop off their load.

After a while waiting to get our key and check-in, to access the rooms we have to go through the casino or slot halls, a clear invitation to throw some chips at something. As soon as we entered our bedroom, the automated system opened the curtains, revealing the city of Las Vegas. Practically already dusk when we settled down, we take advantage of what was left of the day. Las Vegas was already turning on its lights.

Leaving the Planet Hollywood and leaving behind the Luxor with its sphinx pyramid, we found ourselves facing the New York Hotel, a reproduction of the New York skyline with its own Statue of Liberty and a roller coaster between the buildings.

Starting our advance on the Strip, the first of the great hotels that attracts attention for its reproduction of the Eiffel Tower, among other monuments, is the Paris. With architecture of great Parisian building of the nineteenth century and surrounded by monuments such as the tower itself or the triumphal arch reproduced to scale, its interior reproduces supposedly picturesque streets of Paris under a sunset sky with some clouds.

Inside, between lampposts that emulate the decoration of Parisian streets, slot machines are interspersed with blackjack and roulette tables, with an untiring public always at the foot of the slot machines spending the coins of their cubes.

On the opposite side of the street, the Bellagio, is one of the newest hotels, built on the site where the legendary The Dunes, one of the most famous casinos of ancient Las Vegas, stood. The Bellagio is a luxury hotel inspired by the Lake Como resort in Italy and is famous for its elegance and artificial lake on which the performance of its dancing fountains is executed.

Inside, we can see many figures of ornate ornamental crystals, as well as a large number of flowers around other attractions in the interior of the hotel, such as a small ferris wheel or a merry-go-round. Following up the avenue, we arrive at one of the legendary casinos of the old days of Las Vegas, the Flamingo, where the original version of Ocean's Eleven was filmed (the new one was filmed at the Bellagio) among other films, such as the also memorable Viva Las Vegas.

As in all of them, the casino is full of slot machines and insouciant patrons. Following our route along the Strip towards Fremont Street, we arrive at another veteran, Harrah's, in front of the new and impressive building of the Mirage hotel. Along with Harrah's, we also find the Casino Royale, although it has nothing to do with James Bond, this being rather a casino known for low budgets.

Then we arrived at the largest hotel complex in the world, a luxurious hotel and casino resort with Venetian theme called The Venetian, with a total of more than 7,000 rooms, shopping center, restaurant and even gondolas sailing through its artificial canals!

Here we stopped to have snacks in one of their restaurants at the foot of their particular Venetian Grand Canal while we watched the gondolas go by. We left the Venetian and walked to The High Roller in The Linq, a panoramic wheel of fortune. There is a free bar during the 30 minutes of the tour with all you can drink. We took advantage with Long Island and Las Vegas Sunset. After that, we go inside the Bellagio. And the other was the Caesar's Palace. At night, we headed back to the Strip to enjoy the bizarre shows, and attractions. It is the moment when the city becomes the true amusement park for adults and the lights blind both visitors that can literally be seen from space.

After a tour and watching the show in the shadow of the Golden Nugget, the oldest casino in Las Vegas, we set out to go to the Stratosphere Tower, where we would dine looking at the lights of Las Vegas. The tower is actually another hotel casino with a height of 350 meters from which we can see the Strip along its entire length, which makes it a great night observatory to see the lighting of Las Vegas with a great perspective.

After dinner at a Mexican restaurant with a burrito and a couple of Coronas and a little more of our walk and views, we decided to continue with the nocturnal wanderings, and we end up at the nightclub, dancing among strippers, men and women, and with a drag queen show. We entertained by placing the tips to the dancers in the skimpy underwear. We returned to the hotel at 4 am. 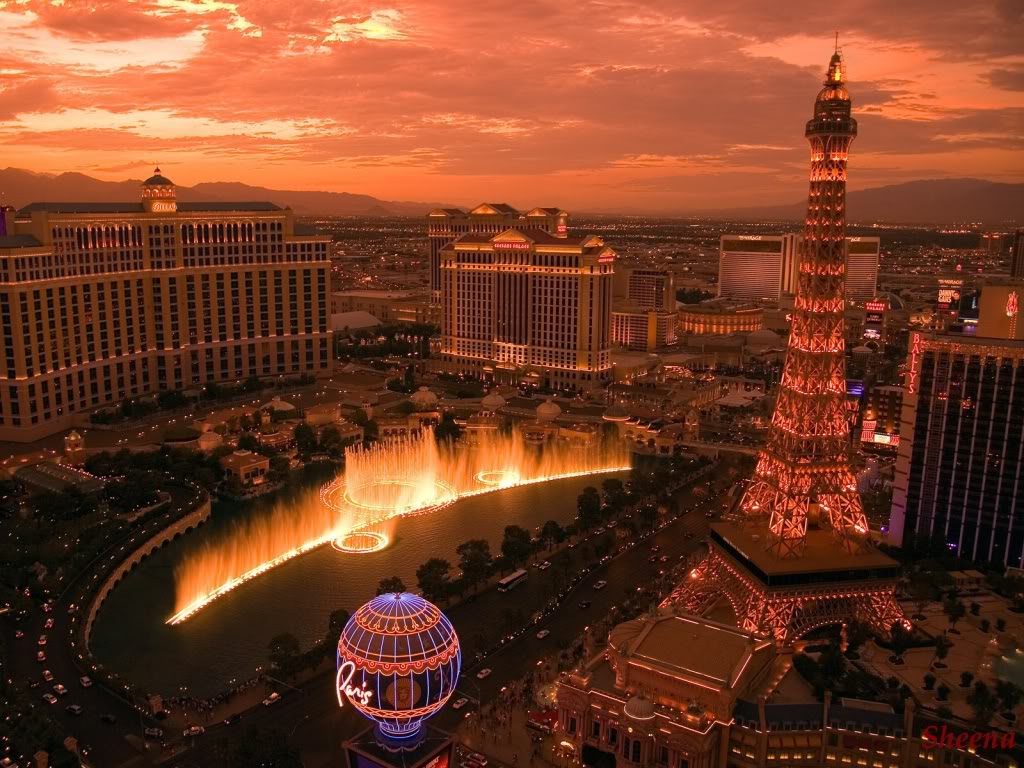 At 9 am we arrive at the heliport. I went with that brain hammering and a little nausea so characteristic of the crude post-drunken apocalyptic. But hey, its time to fly. Our pilot, originally from Salt Lake City, received us very graciously.

Accompanied all in the same helicopter, we started the flight to the Grand Canyon, an arid landscape combined with a perfect blue sky. We saw under our feet the amazing Hoover Dam and its crystalline artificial lagoon that reflected the sky and the clouds in an idyllic way. We see the winding of the Colorado River splitting the mountains and the plateau of the same in two.

We landed on a cliff, where we stayed for about half an hour taking pictures and eating sandwiches. We rose again and stopped again to refuel. The aerial view is a sublime experience. It was almost poetic to admire those rocky ones of millions of years, almost as old as the planet itself, while we listened to dramatic music by Tchaikovsky, Wagner and Strauss.

When we finally got off the helicopter I was about to kiss the floor in a papal attitude. On the way to the hotel, we stopped at the famous Welcome to Las Vegas Sign, that omnipresent sign in the films that are filmed in this city. I thought it was huge and majestic, but it's really a sign, very small and not very relevant.

At the hotel we ate at one of the restaurants. It was a pleasant surprise to discover that many of the dishes were of Mexican origin. They gave us chips with red sauce and a silver overflowing with guacamole. In the main course, we have delicious enchiladas of lobster, shrimp and fish paired with the red wine of the house.

After another quick nap, we went for a walk and take photos along the Las Vegas Strip, filled with luxury hotels, endless casinos and shopping centers. After sunset, we all met at a bar to have a few drinks, and then we went to a musical restaurant.

We enjoyed a feast with several typical dishes of the place, boiled eggs with truffle, potato gratin, tiny glazed brussels sprouts, meat, chicken and pasta with mushrooms. The acoustic environment alternated a phenomenal jazz music and a sexy singer.

Of course we could not leave Las Vegas without going to a concert. We crossed a casino at a fast pace, passed the brief security, and we positioned ourselves, with much emotion in our places, up ahead, next to the lustrous scenery. There were many celebrities present; Just behind us were Kelly Osbourne, Rebel Wilson, Jennifer Lopez and Justin Bieber.

The show is full of intriguing lights, exceptional dancers and of course all the great hits of Jennifer Lopez. In the end, even Pitbull, came out suddenly like a stage mole, and rapped a little, or that's weird that he does.

At the end of the concert, around midnight, we were all tired. So we returned to the hotel to sleep soundly.