We decided to visit San Francisco in a single day, knowing well that San Francisco deserves a stay of about three days. I think I should explain what we expected from this city, which was the reason that took us to the West Coast. San Francisco is a beautiful, original and bohemian city (too much for my taste) but it is not New York.

We had a rented car, which gave us great agility, because San Francisco, at least in August has less traffic jams. In fact, it is a very pleasant city to get around by car because it allows us to enjoy the beauty and charm of its Victorian streets and houses.

We made a visit plan to see the essentials, and really, although it was a busy day, we ended up with the feeling that we had seen the essentials. The story that I am going to tell you is about how we were able to visit the must see places in San Francisco in a single day. It can help those who have planned just 2 days in San Francisco and do not have a rental car.

We took the flight from New York to San Francisco mid-morning, and we had a stop in Atlanta (because it was much cheaper). The fact is that we landed when it was already dark. This did not prevent us from watching the interesting landscapes from the air near Atlanta, or the passage through the Sierra Nevada, a mountain range that crosses as we arrived in California.

When we landed, we took the rental car and we met the group of friends who had arrived in San Francisco some days before, and with whom we would make the route along the west coast. In this case, we arrived with a room booked. Our objective when planning this trip was to avoid hotels, given the advantageous quality to price ratio of the motel chains in the United States.

From here, and until our arrival in Las Vegas, scheduled for several days later, we were going to move around California without previously having a hotel booked. The purpose was, taking advantage of the ease that exists in the United States to find a room in a good motel, to have some freedom to plan our route, in view of how the trip was going.

And this came to us very well, because it allowed us to make some last minute change that I will tell later. We did the quick check in. On arrival we asked for a quiet room since for me the main thing of a hotel is to sleep well. The room is not that bad at all although they were a bit old and the bathroom was very small. Once set in the room we went out to buy some pastrami sandwiches for dinner and we took a look at the nearby parking lots. 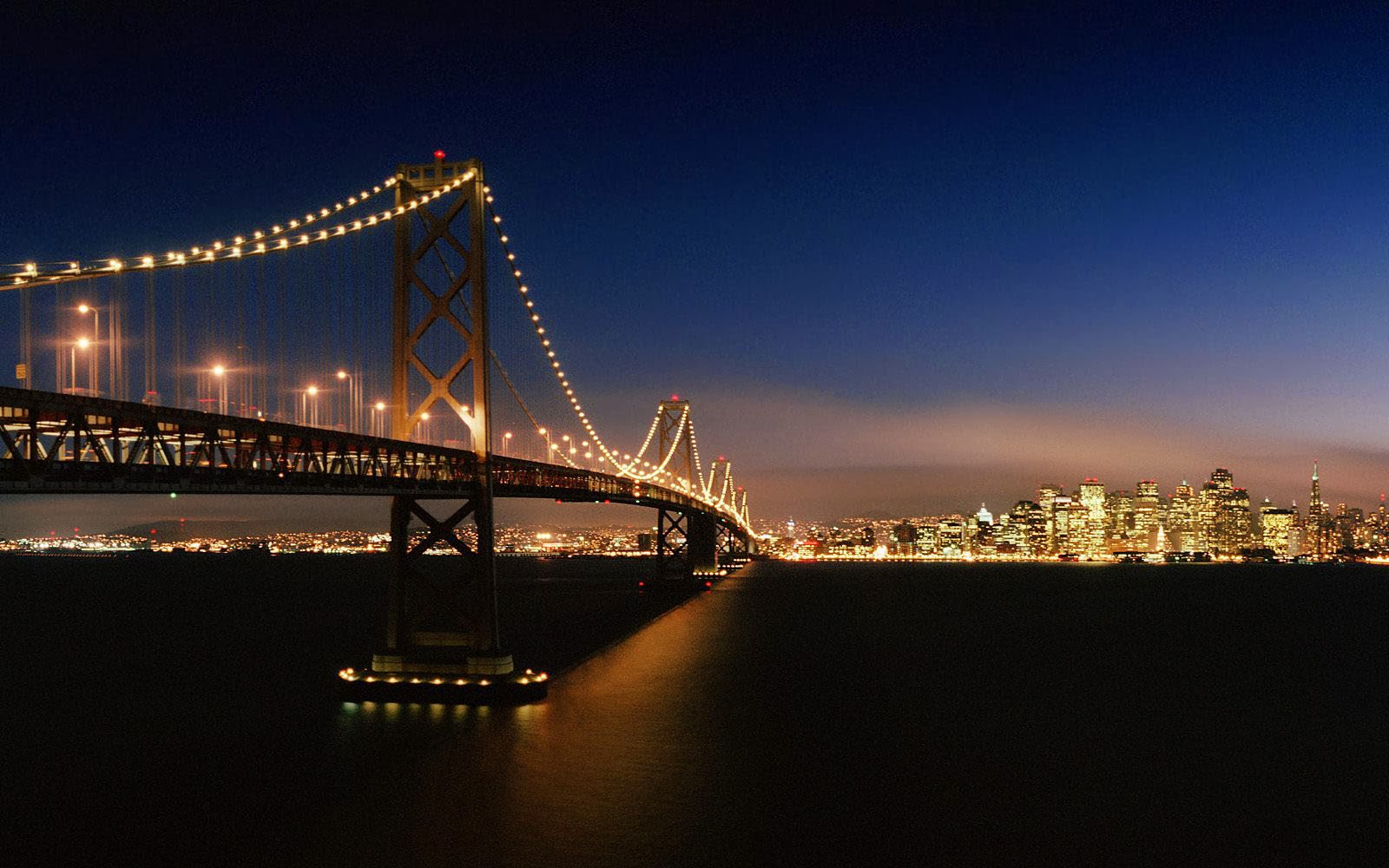 We knew it was very risky knowing that in August surely we would get fog and we would not be able to see much. That's how it was and the clouds did not allow us to enjoy the silhouette of the city in its entirety. Anyway I liked to go up there and at another time it would have been more fun without the car.

The next thing we were going to see is something crucial on any trip to California. Simply writing it makes me remember how fortunate we have been to have been able to see with our own eyes such world-renowned places! We head to the Golden Gate Bridge. Before crossing the bridge, just at the exit, before crossing to the right, we made a stop at the Golden Gate Natural Recreation Area, a viewpoint just under the bridge.

Here there is also a replica where the actual size of the cables is shown. This viewpoint has better views for me than the Vista Point, and the fog bothered us less. After taking as many photos as you can imagine, we finally crossed the bridge after paying the toll. Crossing the Golden Gate is a unique experience. It seemed to me that I was finally there.

It was a rush and I did not care about the clouds. We made a quick stop at the Vista Point, the other viewpoint. The first thing that surprised us was the cold (remember we were in the first week of August). It was very windy, with a rather fresh air, which required wearing a sweater, and still it was cold.

From this viewpoint we have excellent views of the Golden Gate, the city of San Francisco and the Alcatraz island. Of course we took a walk on the suspension bridge, until we reached the middle of it, where we already turned around to get the car again. It was pretty short stop because in this viewpoint the fog totally irked the photos and was also full of people.

So we gave up and went to Sausalito! Sausalito is a very special town. It has fantastic views of the city of San Francisco. It has that air of maritime village where many wealthy people have made it their home. It also has to its favor that the fog is less here that usually is present in San Francisco and here usually the sun shines, in addition to having a very good and super famous hamburger and above the boathouses.

For these arguments we did not hesitate to visit and have lunch there. The only bad thing about the burger is that it is tiny. We bought an ice cream and took the ride back in the car.

And now it's time to take a long walk through some of the most interesting neighborhoods in San Francisco. We parked the car in the area of ​​Little Italy and walk its streets of great charm. We see houses of European style, with great color, and even with great paintings. Ther are cafes, restaurants, and even a large bookstore, City Lights, the most famous in San Francisco.

And where better to eat than in a typical Italian Trattoria. And so we did. And after the meal, we decided to change the atmosphere. We crossed a great avenue, and entered the incredible Chinatown of San Francisco. As we go down one of its main streets, Grant Street, I have the incredible feeling that this is walking around Shanghai.

Just seeing from some point of the street the impressive Transamerica Pyramid tower brings me to the reality that we are in San Francisco. Undoubtedly, the visit to San Francisco's Chinatown is totally worth it. We leave by the end of Grant Street, crossing the Dragon Gate. After a short walk through the adjacent area of ​​Downtown, the modern center of San Francisco, we return to the car to continue our visit of the city.

We stop for an ice cream at one of the European establishments in Little Italy. Now the goal is to visit different interesting areas of the city while moving on the car. And the first thing is going to be to see the famous slopes of San Francisco. And it's easy, because we're actually on the hill of Nob Hill, where we can go up and down the steep slopes.

We see the beautiful views that these slopes promote in the city, and, see the famous cable trolleys. Currently, the service of the historic cable cars is intended to meet the demand of tourists. It is difficult to resist a ride on the tram, going up and down hills and, of course, we do. And from here we go straight to the maximum slope of the steep streets of San Francisco, the incredibly winding stretches of Lombard Street.

This is one of the most cinematographic images of the city of San Francisco. I was very excited to walk the mythical street as we always see in the movies. The street is so steep that to be able to go below, the road is giving sinuous curves. First we go to the lower part of this stretch, where tourists crowd together taking photos of this amazing street down an endless row of cars.

And then, after taking some pictures, we take the car and climb to the top of Lombard Street to also have the feeling of how to get down this steep hill. And it is an interesting sensation. The day is already quite advanced, but we still have important places to visit. The first of them, is the Victorian houses known as Painted Ladies.

Actually, in San Francisco we continually see European style houses, specifically, Victorian ones. In Alamo Square, in the Haight Ashbury district, a series of houses are concentrated. With the surroundings of the park and the bottom of the large downtown skyscrapers of San Francisco, they create a scenario of great beauty.

This district had a huge boom in the 60s with the hippie revolution, as well as the nearby Castro, icon of the gay community. We can enjoy the great charm that surrounds the city of San Francisco. The sunset is over us, and we have the last stage of this busy day. We go to the port, specifically, passing by the Embarcadero.

We reach the area of ​​La Marina, where from Pier 39 we can see the sea lions, and finally, we go for a walk around the Fishermans Wharf entertainment area. It is the old port area that is currently the great leisure area of ​​San Francisco. There is a great atmosphere down the street, with many shops, restaurants, music bars.

By the way, although we are in August, it is cold, which forces us to buy more warm clothes. We are very impressed by the street stalls where they offer large cooked crabs, which also seem to be the icon of the area, and we are not reluctant to try them. We finish with a very special dinner at the spectacular Boudin Bakery Bread Factory.

Here in addition to seeing how the bread is made, we can eat large round loaves filled with salad. And we have already completed the day.