Luxembourg is that country that everyone has heard about once but very few visit. And we thought it was a very good possibility. Luxembourg is not a well-publicized destination. In fact it is so small that there are hardly any specific travel guides for this country. Most of the time they put it as a complement to the Belgium travel guides frankly with very little information.

Through its tourism website and various travel blogs, I was able to get information that came in handy for the preparation of this trip. Once everything is in order, we prepare our itinerary for the weekend in Luxembourg City, Hamm, Vianden and Echternach. And that's how our trip began.

We crossed the Moselle for a few kilometers after entering Luxembourg. After arriving in the city, we parked the car in a public car park near the center, in the Boulevard de la Foire. The historic center is a UNESCO World Heritage Site. From there we went down through a beautiful park, with a life-size pirate ship.

We walk towards the Avenue Monterey to connect with the Royal Boulevard that left us facing the Pont Adolphe in the historic center. We see a tall bridge that rises through its double arch 153 meters above the valley. We approach the viewpoint of the Petrusse, located a short distance away.

From here we can see a spectacular view of the clock tower belonging to the Spuerkees building (on the other side of the Pont Adolphe), the valley that forms at its feet, the Viaduct and the gardens adjoining the viewpoint with the flags of the country waving overhead. Under our feet were the famous casemates, underground passages and defensive posts dug out of the rock.

Unfortunately the Petrusse only open their doors at specific times of the year, which we could not enter to see them. We continue our route through the Place de la Constitution, with its monolith crowned by a golden lady. It was destroyed in 1940 during the German invasion, and again restored in 1984.

We descended through Roosevelt Boulevard before reaching the Viaduct. We cross perpendicular to the so-called Chemin de la Corniche, known by the nickname of Europe's most beautiful balcony. I do not know if indeed it is. I can say that the views are spectacular, with that alternation of high and low areas.

The place is surrounded by water (in this case the other river that bathes the city, the Alzette) and vegetation. It merges with the quasi- underground Grund district and Neumunster Abbey, standing up from the street like a beacon. Without getting carried away by the initial anger, we return a few meters back to ascend the Rue Sigefroi to the entrance to the Ville.

Here after wandering a little we see the Ducal Palace. Built in 1572, it underwent several modifications in the 18th and 19th centuries, until it reached its present appearance. Its towers finished in volutes and its mixture of Renaissance, Baroque and Neoclassical styles. As the residence of the Grand Dukes it does not seem excessively opulent, although this does not debar it from being a beautiful construction.

It is only accessible between July and August with prior reservation at the Tourist Office. Attached to the palace, is its tiny parliament, where we get confused to realize that it is there. Surprisingly, a few meters from the palace, are several brasseries (breweries) with their customers taking their drinks. People are all dressed in suits.

As we had been quite busy, we decided to make a new stop, this time at Place D'Armes. The place is full of terraces and with a great atmosphere, where we had some snacks and Bofferding (local beer). While we were there, we were able to enjoy a live concert of classical music at the kiosk in the square, which seems to be very common.

From there we went to the Place Guillaume II. In it we find the tourist office, the Hotel de la Ville (City Hall), which seemed a bit anodyne compared to the rest of the historic center. We also see the statue of William II, Grand Duke between 1840 and 1849, who granted the country its first constitution.

After going down some side stairs we went to Rue Notre-Dame, where we found the Cathedral. For some reason the exterior was adorned with flags of the country (normal) accompanied by those of the Vatican State. It is the most important temple in Luxembourg, built in the seventeenth century. It was not consecrated as a cathedral until the nineteenth century, and is a mixture of Gothic and Renaissance elements.

It was in restoration works on the outside, which made it look a little shabby. And it was time to retire to the hotel. Although just opposite the small Luxembourg airport, we slept peacefully since the soundproofing was perfect. The reason for taking this hotel was its proximity to Hamm, which suited us perfectly for the first visit in the next morning. 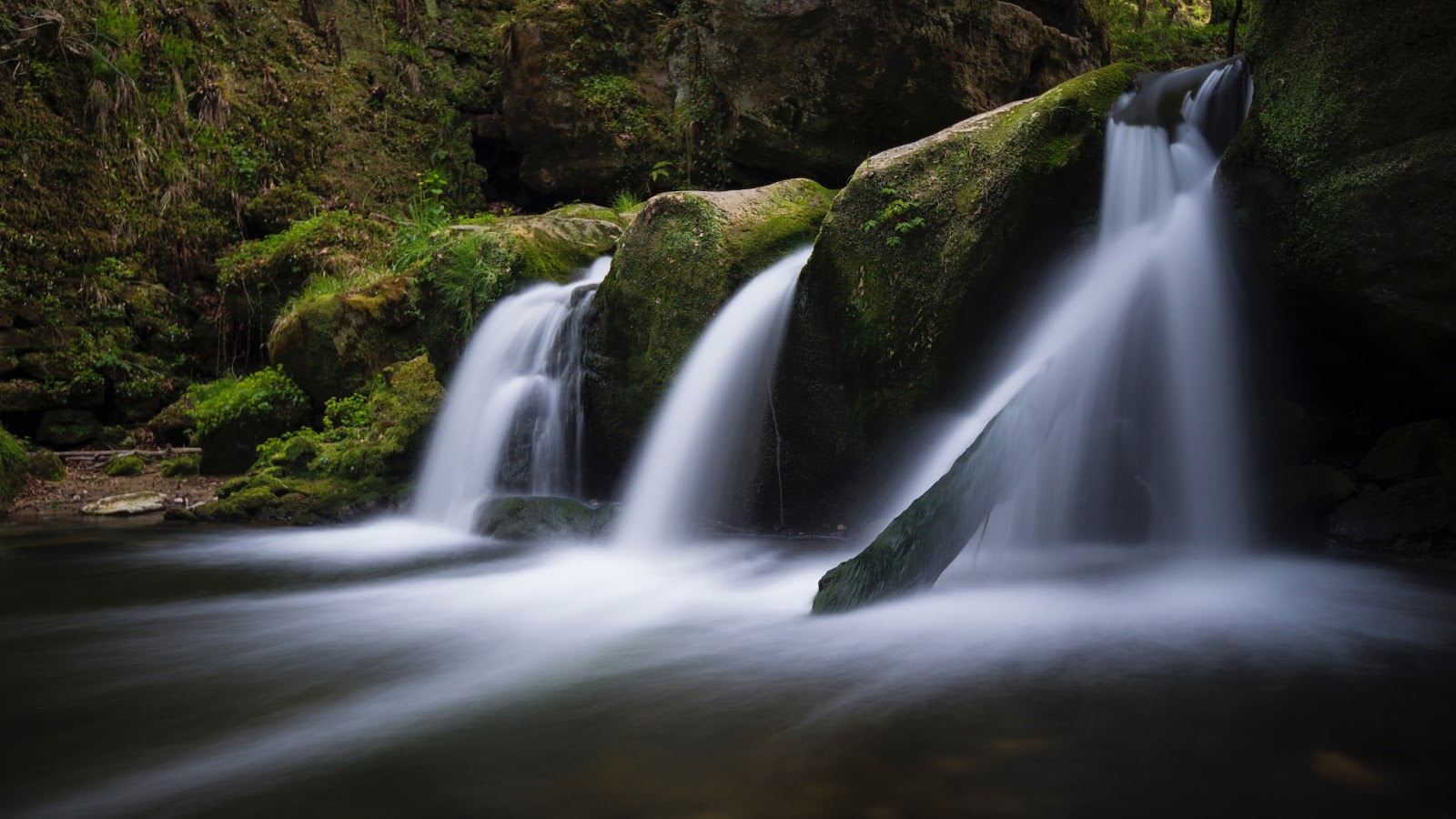 We got up early. After leaving the hotel, we headed to Hamm, a few kilometers from the airport, for the next stop of our journey. We see the American Cemetery, where lie the remains of 5000 American soldiers killed in combat during the Ardennes Offensive. Next to them rests George S. Patton, the best general of the US Army during the Battle of the Bulge.

We parked outside the cemetery, finding an unusual activity for the time and day of the week that was (Saturday). We entered and saw many people of very old age in uniform with floral decorations. Without realizing, we had gone to visit that place on the anniversary of the end of the World War II in Europe. There were Luxemburg army soldiers and war veterans (most of them were over 80 years old).

A wreath in homage to all the fallen was placed in front of the simple tomb of Patton. It's the same as all the ones there, with the only difference being that it is something separate. After watching the very emotional act, we walked through the interior of the enclosure, with a central memorial.

The walk around this place is one of those that surrounds the body with a strange sensation. We leave this place still with the anguish in the body and with the clear idea that it is good that there are places like this. It remind us all that there are things that should never happen again, under any circumstances, nor protected by ideologies, creeds, religions or any other excuse.

A short distance from this cemetery is the German cemetery, where 10,000 German soldiers sleep. No one visits them, as they are seen as losers. In the end, they were all victims, for one reason or another. We took the car and headed towards the one that for me is the best kept secret in Luxembourg to Vianden. It is a small town located in the area of ​​the Ardennes, about 45 kms from Luxembourg capital.

Nestled in a beautiful valley bathed by the river Our, the small city spreads on the slopes of a cliff where its castle stands. This imposing authentic jewel of medieval times belonged for several centuries to the Counts of Vianden, specifically to the Orange-Nassau family, dynasty from which the royal family of Holland originates.

After the departure to take over the Dutch throne, the castle is in disuse and abandoned, suffering serious damage. Its interiors house rooms with period armor, old kitchens, rooms, exhibition halls, a Byzantine room (very colorful). The views from their viewpoints make it worthwhile to pay the entry alone.

To ascend to the castle we go up to the highest car park of the Grand Rue, the main street of the town. We leave the car and after a walk of about 300 meters walk under its battlements. After enjoying the castle we decided to eat in one of the brasseries that are next to the river.

We see a lot of affluence in its terraces, especially groups of bikers, which we can see in the area, since the road with a rather winding path invites bikers. We ate some great savory stuffed crepes and a salad, accompanied by two Diekirch, great beer of the area, by far the one I liked most about the trip.

After lunch we took a walk along the river, delighting in the tranquility of the town and the reflection of the houses in the waters of the Our. One of the most distinguished inhabitants that Vianden had, was the great Victor Hugo, who resided for a time here. There is a bust of him in a corner of the bridge where the Grand Rue ends, just in front of the House-Museum where he lived during his stay there.

We climb this street back to the car (the descent is definitely much better). We see on the left the Trinitarian Church, the Town Hall and the old houses that flank its sides, which give it an absolutely medieval air. After taking one last look at the impressive castle, we headed for our last destination of the day to Echternach.

After about 30 kms we arrived at Echternach and parked in a parking lot next to the Sure River. It is the oldest town in Luxembourg, born around the Abbey. It was founded in the year 698 by St. Willibrord, a monk of English origin who Christianized this area and ended up being the first bishop of Utrecht. The town is located in the so-called little Switzerland.

It does not lack in beauty, but frankly I did not find many reasons for the nickname. This small city could be called the quiet city, as no noise is heard. We can barely see a car, until the police station looked like a museum more than it was. Its historic center is small and very easily visited.

The pity was not being able to access the Basilica and the Abbey. We had spent time on it and in this country everything closes very soon (it was 6 in the afternoon). We walked in front of the Rue du Pont admiring the Saint Peter and Paul church of Merovingian origin. We arrived at the Market Square, a small but charming place.

Here we find its City Hall (Hotel de la Ville) built in 1444, in Gothic style and is one of the jewels of this city. It is highlighted by the arches of its facade and the statues of the Virgin Mary, King Solomon, the Fortress, Temperance, Prudence and Justice. In the center of the square is the Cross of Justice that since medieval times served to demonstrate the power of the lords over the serfs.

We took the Rue de la Gare to go to the riverwalk that surrounds the city, and buy some ice cream (it was a temptation not avoidable). After that we went down the street, full of terraces and restaurants, to get to the banks of the Sure, natural border with Germany. We followed the path marked by the river towards the car park where we had left the car, with a nice walk.

We pass next to the Rococo Pavilion, built in 1761, and that currently houses a cultural classroom on the history of Echternach. Of course it was already closed. So we continued walking to the car, then left for Frankfurt-Hahn airport, where we would spend the night, at the B&B hotel. We had dinner on the way at a brewery in a nearby town. We delivered the car with a full tank and go to sleep.