We leave Adelaide in the direction of the famous Barossa Valley, a major wine region of Australia. Before taking the Scenic Drive that takes us through the vineyards and villages, we stop in a first big cellar, Jacob's Creek. The wines sold here are also more expensive, and perhaps better, than those sold in every bottle shop in the country.

In the Barossa Valley, whose climate is comparable to Tuscany, there are also very beautiful olive trees and a small production of olive oil. Our first moments of happiness this morning is when we see parrots occupy the trees. We had already noticed two birds of the same species in the suburbs of Adelaide. We are surprised to see that parrots are so much on the Australian territory. Other birds like Cockatoo reveals their presence by beautiful songs. It reminds us of New Zealand!

We arrive at Tanunda where there is a very special atmosphere with old cars revamped everywhere and a crazy world in the main street. We spend a good time strolling down the main street to admire these beautiful cars. Chateau Tanunda is the first vineyard we visited. The castle was built in 1890. The building is beautiful, surrounded by trees and beautiful lawns.

It is bigger than the South Australian Parliament in Adelaide. The central tower is about 22 meters. By reading some information (well presented) in the great tasting room of Chateau Tanunda, we discover the origin of the name given to this region. It makes us smile. Colonel Light named the region as Barossa for the Battle of Barossa, which was lost by Napoleon's troops in 1811.

Shortly after, at the doors of the Castle, we discover Tanunda. Small town of 4000 inhabitants, it is the most Germanic of the valley. We feel the German atmosphere, as we see the butcher sells pigs' feet and sauerkraut. The street names are germanic. Indeed, the German settlers who settled in the region from 1842 left a strong imprint on the Barossa.

Four Lutheran temples are hidden in the streets. It is like a trip to Germany when we see the written inscriptions in German. I was particularly touched by the Langmeil Lutheran Church. The cypresses lining the aisle seem to watch over the oldest cemetery of Tanundra, on both sides of the temple. Here rest many pioneers, pastors and Lutheran missionaries.

We take the small tourist road that crosses the different vineyards. If we have the impression of walking among the Beaujolais, eucalyptus groves remind us that we are in Australia! Our second tasting at Thorn-Clarke takes us through the village of Angaston, founded by settlers from Cornwall in 1841. We leave then Germany for England. The churches are no longer the same.

After the wine we cannot resist the temptation of a stop at a small cheese making company. The day could not end without seeing our first kangaroos who seem very active or visible since our arrival. Everyone keeps alerting us about driving late in the day. Who has ever seen a kangaroo in vineyards? In addition they were at least 10! It is an incredible image before sunset.

I am really a big fan of Australian cottages. There are beautiful ones with the verandah and the little flowers and there are those with the little garden gnomes. I chose mine. After returning we see a cricket match. Tonight we head to a small Indian restaurant. 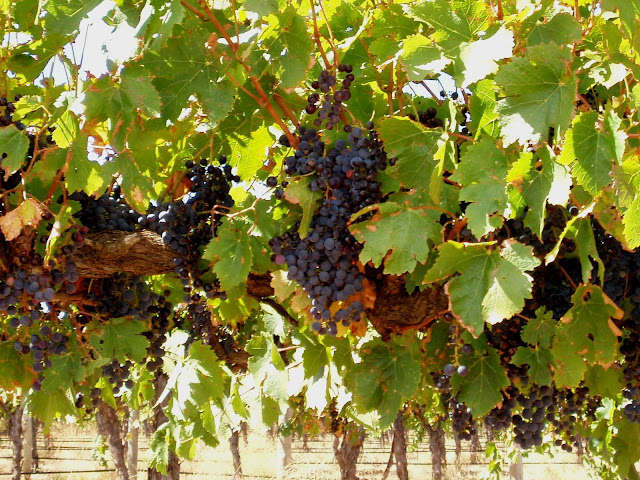