Great travels have something wonderful that their enchantment begins before the departure itself. We open the atlases, and we dream on the cards. We repeat the beautiful names of unknown cities. Alaska! Here is an atypical destination that makes us dream of more than one! I imagined a gigantic land, poor roads, glaciers, and wild animals.

A history of miners, rains and many cruises make Skagway one of the most interesting and popular cities to visit in the Inside Passage. Skagway is a town that was born and grew up with gold prospectors. It was one of the entrances to reach the Yukon River and that involved the ascent of the mountain to the so-called White Pass.

It gave rise to the mythical photos of the gold prospectors carrying heavy weights on their backs. When they arrived at the top they found the border of Canada that demanded that they take a ton of material to be able to survive the harsh winter, in which the hunting was not abundant.

In 1898 they started to build a railroad that reached White Pass, but the gold rush began to decline. Just when it was finished in 1900 almost nobody was going. Now the railway is a tourist train that does not stop impressing the passenger seeing the precipices that almost touch the train tracks. 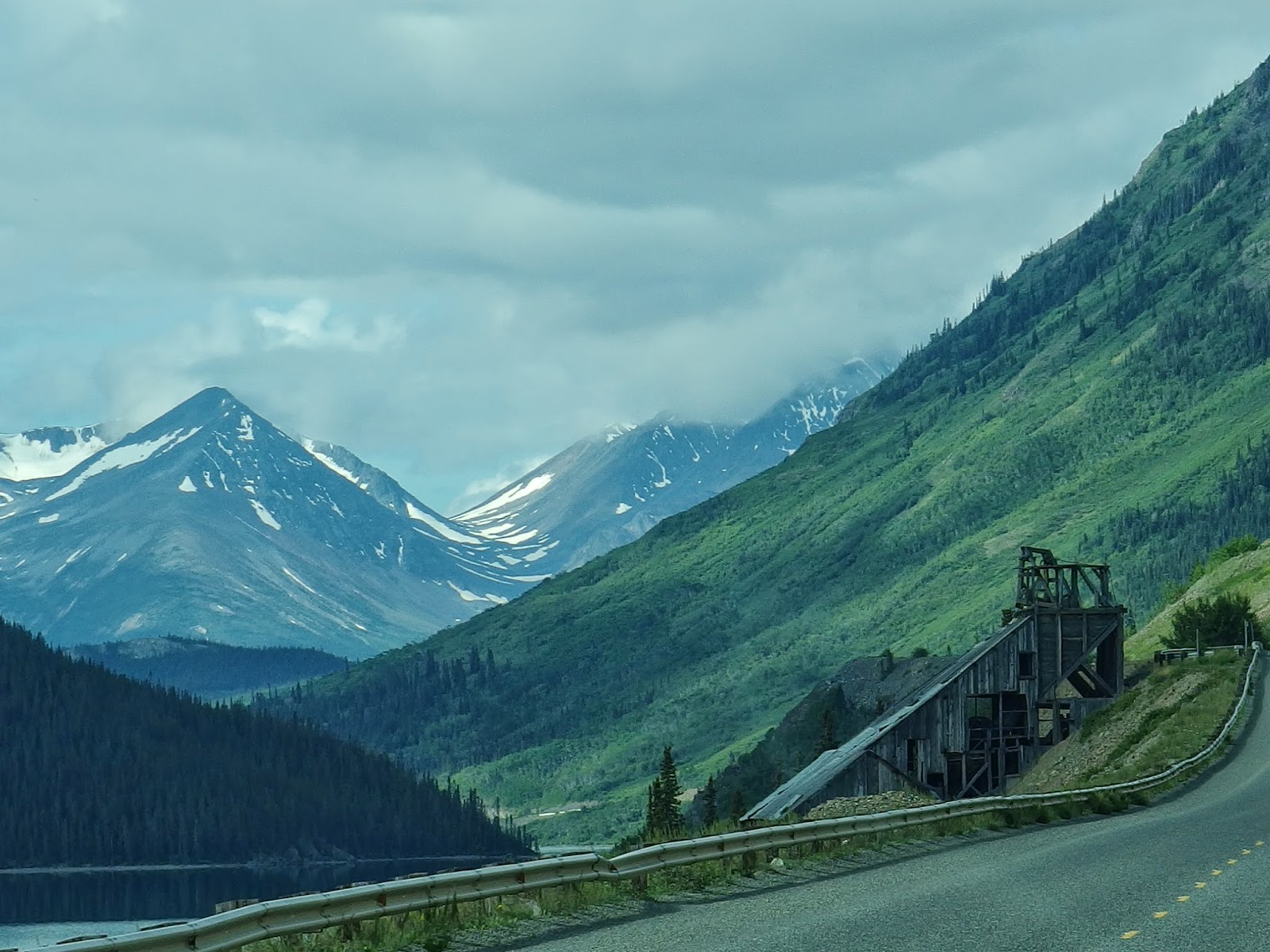 I opened my eyes at 5.45 and when I drew back the curtains I found myself facing a rocky cliff half covered by vegetation and partly by human graffiti. The clouds dissipated during the night and the sunrise is magnificent. Due to the absence of clouds at night was cold. In the light of dawn I can see that a white film has covered the landscape.

There are people who climb to leave their mark in the most unsuspecting places. The ship was docking. The sky is cloudy and today we make a beautiful excursion to the border of Canada aboard a train. Its line stretched in full gold rush and crosses majestic landscapes to ascend 1003 meters to Summit Pass. On the other side this is the territory of the Yukon and Klondike.

Skagway, surrounded by mountains, on the edge of the Pacific Ocean is a small town that preserves many vestiges of that insane and violent era. The center is full of buildings of the late nineteenth and early twentieth centuries. They are now dedicated to entertain the tourist in the summer days.

The journey of just over 100 miles lasts almost 5 hours to Carcross (Caribou Crossing). But I had the impression that the trip was shorter because the landscape is a real spectacle of every moment. I do not have the talents of a writer to transcribe this beauty with words. I remain in awe of the architecture of this village of another era.

There are 3 stops. The longest is in Bennet to eat an exquisite miner's stew at 10.30 in the morning that we have repeated with the classic American apple pie for dessert. We take a short walk through the vestiges of the old mining town which stands in front of the beautiful and extensive lake of the same name.

When we arrived in Carcross, a bus was waiting for us to return by a wonderful panoramic road where we see mountains and lakes of Canadian grandeur and beauty. At 15.30 we got back to the boat. Frankly tired and with our books and music in tow, we spent the rest of the afternoon at the bow observatory in front of the embouchure of the fjord. We are exhausted. We only have dinner and go to bed. 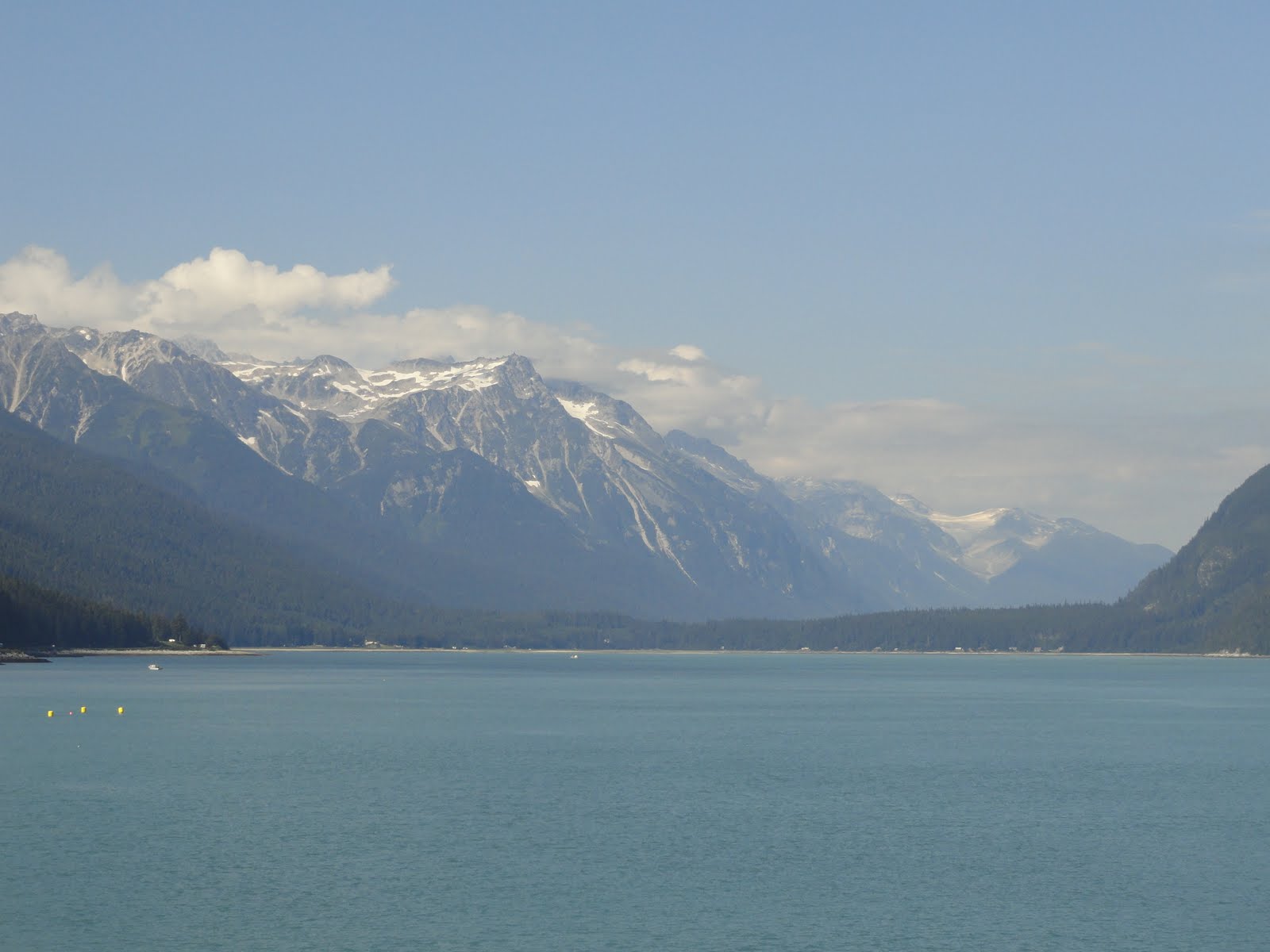 It's 5 o'clock in the morning and I'm at the observatory on the deck known as the crow's nest with a coffee and a wonderful panorama before me. I woke up very early and since today's stage is over the sea. I preferred to take a preferred place to watch the show.

At 7 o'clock the rangers of this peculiar park go up to explain the characteristics of the glacier calving that we will see. The lounge next to the library has become a small auditorium

I can already see the snowy peaks that surround us and I am sure that this will be one of the main milestones of the cruise that has been so beautiful. Glacier Bay is a succession of fjords that end in a tidal glacier that goes into the sea and that releases icebergs continuously. We hope to spot whales, puffins, otters and sea lions and that time helps. It has dawned cloudy but is bright at the moment. I'm not the only one who has been out of bed, as there are three more early risers in this beautiful room.

It's almost 7 and the rangers' boat is approaching. The landscape is a mixture of snow-capped peaks cutting into an overcast sky that lets in a ray of sunlight, calm waters and shreds of low clouds on the trees on the banks. It is a scene of absolute placidity that produces emotion while the hall is being populated by passengers slowly.

At 7.30 the talk begins by a Ranger named after the bear keeper who explains the tour and introduces us to a native Tlingit. He tells the long association of his ethnicity with these places. He come equipped with musical instruments and tools several used by the Indians of the area. Meanwhile we continue advancing towards the Johns Hopkins and Margerie glaciers that can be seen in the distance, at the bottom of the fjord that divides into two arms.

It is 10.45 and they offer us the traditional Dutch pea soup that feels great when returning from the deck to photograph in the rain and with cold glacier fronts that we are not approaching. It is a pity that the visibility is not desirable, but it does not subtract a little beauty from the panorama. First we visited the J. Hopkins and finally the Margerie. This is much bigger, clean and bluish than the previous one and with a gigantic moraine fed by two high mountains that impresses with its peaks of frozen meringue.

At 1 o'clock in the afternoon, the boat turns around and begins the way back to the entrance of the park near Gustavus, which we will arrive at 5 o'clock. There the rangers disembark and we go out to the open sea to go through this part of the park towards the Gulf of Alaska towards Seward, the end point of the cruise.

Tonight the farewell gala dinner is celebrated and tomorrow we will spend the day sailing, resting and preparing the luggage for the disembarkation. The last thing we see in our cabin before sleeping is the funny animal that every night our room waiter has prepared. Today it is is a monkey. Other days we have had whales, rabbits, turtles.