Today is our second day in Taiwan and we are going to take the red route. We go to Kaohsiung, where we will visit Lotus Lake and Cijin Island.

We took the red metro line. Kaohsiung has two subway stations that are in the ranking of the 15 most beautiful stations in the world. First we went to the Central Park station that receives this name for being next to a park that has the same name. It was designed as a garden by the British architect Richard Rogers. It has grass dotted with yellow sunflowers and a waterfall runs between the escalators.

Then we went back to the Formosa Boulevard, the station where the Red and Orange line meet and is more famous and colorful than the previous one. When we get off the subway we follow the signs, and we reach the biggest dome in the world made with crystals, with an explosion of light and color.

It is an authentic wonder that made us go around and around, an work by the Italian artist Narcissus Quagliata. The drawings of the stained-glass windows tell the life of the human being through water, fire and earth. The exits of the station have a shell shape and were designed by the Japanese Takamatsu.

We are now heading to Cijin Island, which is a small elongated island off the coast of Kaohsiung. To get there we took the Orange Line from Formosa Boulevard to Si-Zih Wan. We go to the left everything straight until the street ends and then to the right until we reach the Gushan Ferry Pier.

At the pier we take a ferry to the island. There are two rows with one for those who ride a motorcycle and one for those who walk. The island is famous for its night market, full of restaurants where we can taste seafood. As soon as we disembark and start walking along the main street we come across the Tianhou Temple.

It is very small, but beautiful, with the typical Chinese decorations and the ornamental richness of the interior. From the temple to the beach it is all full of restaurants and food stalls. The restaurants have fishmongers with fresh seafood at the door. They sell it and then they cook it inside.

We love grilled seafood or simply boiled, but there they add sauces that do not appeal to us. We passed by a post that had whole squid pinned on a stick. Taiwanese women who were buying told us that we should taste them. We thought they would give them to us on the stick to eat them as if they were a lollipop, but no, they are half-fried.

They fry heat a pan, cut them into pieces, add fried onions and put them in a paper cone and in a bag to be able to grab them. Following the street forward we arrived immediately at the beach. We sat facing the sea and tasted our calamari. They were good and a little bit spicy.

We returned to take the ferry and the subway to return to our hotel. We saw something that caught our attention. We see a truck with loud music that turned out to be the garbage truck. The music was to warn people. Each one went out with his bag and threw it inside. It is a normal practice throughout the country, because then we saw it in other places and the music was the same.

And we went to rest as tomorrow we had to get up early to go to Alishan. 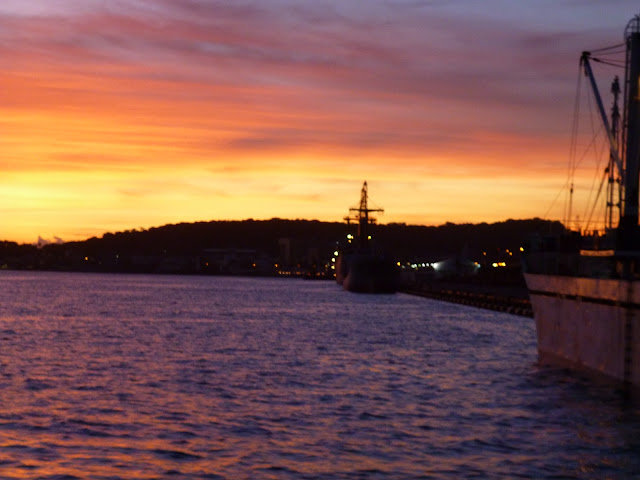