Paraguay is a country added to the route. On the map, wedged between Bolivia, Argentina and Brazil, Paraguay looks very small. Make no mistake, it's bigger than Germany or the UK! Geographically, this allows me to see Iguazu more or less economically. Culturally, Paraguay allow me to attend its beautiful carnival in Encarnacion, less grand than Rio de Janeiro but just as fun. And then, it is rare to have the opportunity to visit a country so little touristy.

Another night bus and I fall asleep to wake up in Paraguay. I leave the richest country in Latin America for one of the poorest (penultimate in front of Bolivia). My timing is a little tight to have time to discover Asuncion, the capital of Paraguay. I have just one day, because the next day, I head to Concepcion in the north of the country.

I spotted the cheapest hostel on the Internet and book a private room, with private shower, air conditioning and cleaning. Air conditioning is an indispensable element here! Coming from Bolivia and dressed as if it was -5 degrees, I must switch immediately in heat wave mode. It is only 32 degrees but the sun is very strong here.

For information, geographically, Paraguay is more or less at the same latitude as the gold coast in Australia. Hello heat! The lack of trees does not help. In Posadas, Argentina, a bridge allows us to cross the enormous Parana river and enter Encarnacion, the third largest city in Paraguay.

Three hundred and seventy kilometers separate us from the capital Asuncion, to the west, on the banks of the Paraguay River. And we will cross right through this part the most populated, the richest, the most fertile of the country where 90% of its population is concentrated.

The bus is traveling on a good road where traffic is low. The plain seems infinite, like a kind of pampa. Sometimes, however, a small mountain range that does not exceed 600 meters, quickly gives way to the pampas. Soybeans, sugar cane, sorghum hedges protect from the wind, potato, soybeans, corn field, but there are also many cattle, to which some horses mingle.

With groves, and forests on the few hills, the landscape is not as monotonous as I would think. From time to time I notice a corral, a large enclosure where are gathered, behind wooden barriers, a few hundred or two hundred animals probably waiting for transport. Not far away, one or two gauchos on their horses come forward to take care of the animals.

I arrived at the end of the afternoon in a estancia which offers accommodation in a few modest but well-equipped rooms. In the small park, well planted and flowered, they planted pretty palm trees that each bear the name of one of the family members from the grandfather to the youngest who has his tiny tree. We immediately enjoy the perfect calm of the countryside, and a starry night where no light hides the stars and it smells of trees, vegetation, garden. 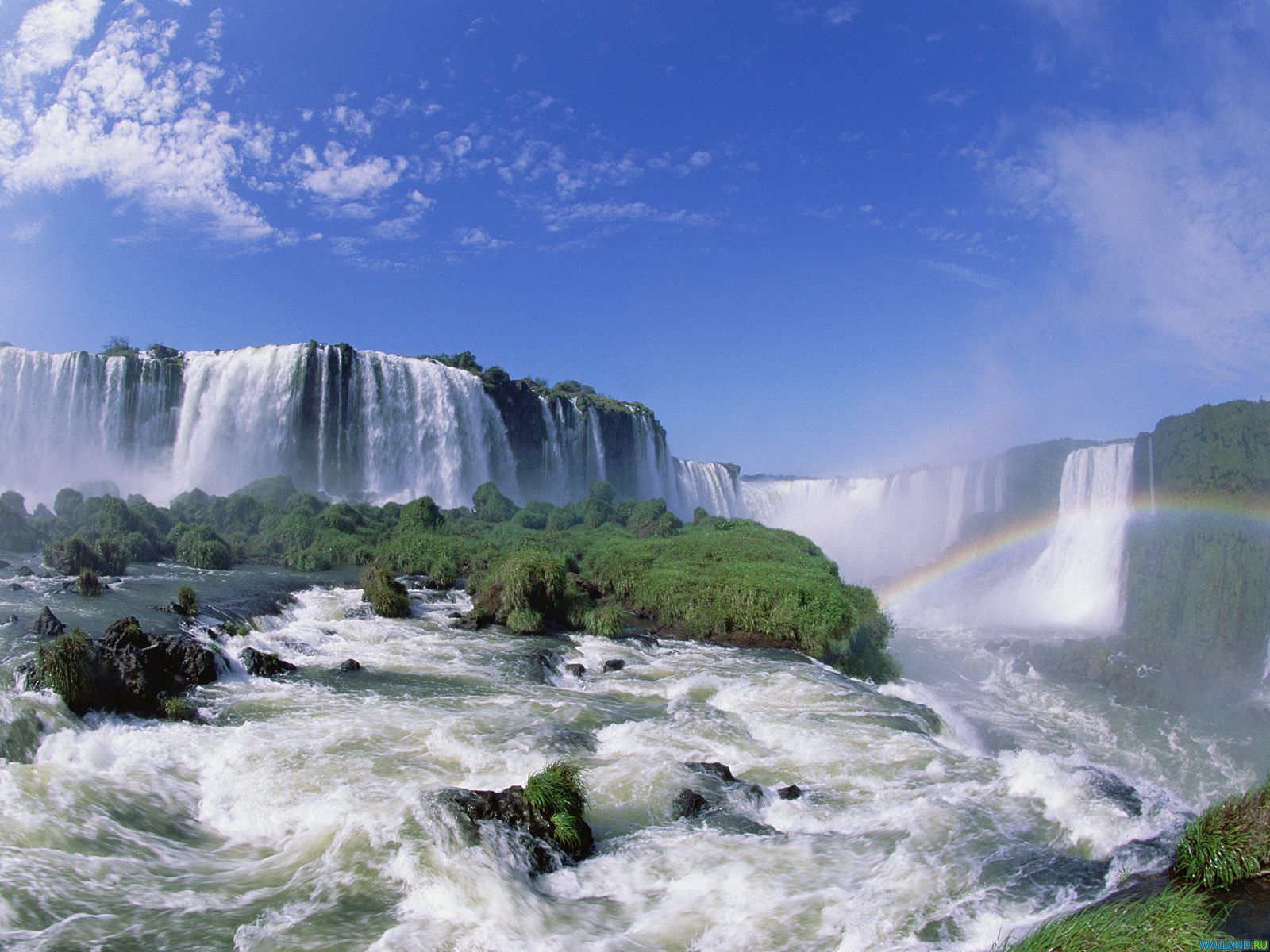 Founded on March 25, 1615 by the Jesuit Roque Gonzalez Santa Cruz, the first Paraguayan saint, Encarnacion was initially a mission on the left bank of the Parana located on the site of the present city of Posadas in Argentina. But the mission did not stay long in this place and was moved to the right bank of the Parana on the current location of the city of Encarnacion.

It was not until April 8, 1843 that the village was elevated to the rank of city, connected to Posadas by the San Roque Gonzalez de Santa Cruz Bridge.

The Encarnacion Omnibus Terminal is located right in the city center, right next to the Cathedral. From Encarnacion there are many buses to Asuncion. The duration of the trip to Asuncion is about 6 hours. Oriented by one of the touts, we are in a hurry to buy our tickets. The clerk finally tells us to take our time because we will leave in an hour and a half.

We did not play the competition to get the lowest price, but given the state of our future bus, we are convinced to travel low cost. The seven-hour journey is lively, at each stop. People get on the bus to sell drinks or empanadas. We have the right to music of the highest quality. The good old dance music in South America.

Across the window, the landscape is a little more chaotic than those we have seen lately. In the countryside, people live a little out of the way. The men of the villages gather around a net of volley ball. It makes me think a bit about India. It's all but orderly. I'm happy to find such an atmosphere!

We arrive in the capital, get out of the station, negotiate a taxi, and go to the hostel. A young man, with a beard of a few days, and a smile opens the door. Past the reception counter, he moves to the rhythm of the music! I enter the dormitory, visit the large living room decorated with a sofa and a flat screen, a common computer, a few tables.

I wake very early. The boat leaves at 7:00 am and cannot buy its ticket in advance. To be sure to have room, especially a bed in the cabin, I'm on the dock at 5:30. The sun rises on the port of Asuncion while the crew finishes loading the cargo.

At 7:00 we can finally board. Fridges, bags of cement, fruit and vegetable crates are piled up at the front of the tub. At the rear, is the common area for passengers, the engine room, and the kitchen. On the upper deck is the cockpit and cabins for first class passengers. Most of the passengers will actually spend the night in hammocks or on the ground in the common space on the lower deck.

Only tourists like us, or Paraguayans who have the means, pay extra to have a real bed. The cabins are small but clean, and there is even electricity! Well, for toilets, it's not great and it's a pipe above the bowl that acts as a shower but hey, it's just for two days.

And off we go for two days of quiet crossing on the waters of River Paraguay. Asuncion and Concepcion are only 300 km away, but it takes 30 hours of boat to reach both cities. The ship frequently stops to unload some of its cargo in villages along the river, isolated in a country where most roads are unpaved.

The day flows slowly to the rhythm of the green banks. The heat is quite overwhelming and I read sitting well in the shade on the lower deck, in the middle of bags of onions and potatoes. Children play and adults sleep in the hammocks. Among the little unusual passengers, a hen comes and goes among the goods. I get friendly with young medical students, who make the trip to spend the weekend at one of their friends in Concepcion. The afternoon ends with good card games.

After watching a fabulous sunset on the shores of River Paraguay we have dinner with some chips and a can of tuna. Fortunately, we can still buy a drink and start the evening with good fresh beers. The boat is quickly plunged into the dark, and especially literally invaded by mosquitoes. Long sleeves and repellent are barely enough to deter them and everyone goes to bed early.

It is hard to fall asleep in the cabin overheated by the sun of the day. Fortunately the lukewarmness of the night is gradually making its effect and I fall asleep soundly, lulled by the purring engine of the boat.

I wake up gently this morning. The freshness of the first hours of the day is very pleasant, and we take the opportunity to hang out in the sun on the upper deck. I have light breakfast with coffee and dry cakes. We should normally arrive at Concepcion around 1 o'clock in the afternoon, but the boat is delayed, we learn in the morning.

It takes another six to seven hours, with an arrival around 8 in the evening. Not much to do on this boat I just enjoy the scenery, reading, playing cards, chatting, tweeting. Just before Concepcion we are entitled to a second fabulous sunset. At 8 we arrive at the dock. It takes 36 hours to reach 300 kilometers. What a record of slowness! My new Paraguayan friends invite me to come home for an asado (barbecue).