We arrived in New Orleans in the morning. On the way to the hotel the driver told us of the tragedy create by the Hurricane Katrina. It is overwhelming to observe the dimensions of that catastrophe, from which they are still recovering. We see areas still uninhabited in the outskirts, and even government buildings in the center of NOLA remain unused.

We arrived at our hotel. It is a perfect hotel in every way with its cleanliness, services, swimming pool, and the location in the middle of the French Quarter. We find a charming boy in the reception, who helped us in everything. We did not lose a minute and we reached the beautiful neighborhood of Faubourg Marigny after crossing the Presbytere, a building from the late eighteenth century that houses a peculiar museum.

We went down the French Quarter. As always it is one thing is to see it in photos and another to be there. The environment of the south has something that the northern states lack. Neither better nor worse, it is simply, different, and magical. Its buildings date from the XVIII-XX centuries and are protected by law (any restoration or new construction must respect the architectural style).

Despite being called the French Quarter, many of the buildings were built during the Spanish era. We see the beautiful facades with the railings of the balconies of cast iron filigree. We visit the 1850 House, a museum-dwelling that represents the life of a wealthy French Quarter family. The rooms are decorated as they would have been at the time, both those of the lords of the house and those of the slaves or servants.

At the entrance they give us a brochure with information about the rooms to follow an itinerary. The visit takes us about an hour. We go around the French Market, a covered market that has innumerable souvenir stalls, clothes, food, where we buy NOLA magnets. We arrived at the St. Louis Cathedral in Jackson Square, whose interior is worth visiting.

There we sat for a while in the cool and then bought a pendant of St. Jude in the gift shop of the church. Upon leaving we find a bohemian atmosphere with painters, tarot readers, fortune-tellers, street jazz musicians, painters and artists and freaks of the most diverse in the street. In a corner of the square is the famous Cafe du Monde, but the line was so huge that we declined to enter.

The next stop could not be any other way. We head to the House of Blues in Decatur Street. We continued walking through the French Quarter and found ourselves in front of a rather ramshackle house that housed a mysterious voodoo store where we went to see all the objects that had been exposed. We visit its various food and beverage areas, beautifully decorated in the Nola style with voodoo, jazz, witchcraft, and blues.

I left the place happy and excited to be there, and we went to eat, before visiting in the afternoon various souvenir shops, art galleries, music stores and Voodoo. We got Voodoo dolls, with their corresponding instruction book and pins. Thus, between the main arteries of the French Quarter we made the next stop at Pat O'Briens stop, in which we tried one of its famous Hurricanes.

A strange mixture of liqueurs that with a sweet taste strangled our brain, and made us lose the notion of spacetime, while we watched the NFL for a while. We left there to the shore of Mississippi. We continue the walk that runs along the edge of the river to the ferry pier, having the opportunity to see the famous Natchez boat docked.

This name comes from a tribe that lived in the State of Mississippi but also from the city of the same name. It is a steamboat, similar to those that plowed the river during the nineteenth century, but currently offers tourist cruises, dinners and jazz concerts. At one of the piers, just in front of the Riverwalk shopping center, we took the ferry that sails to Algiers Point.

We mounted the Ferry and crossing the Mississippi, took us in front of the city, a good place to enjoy NOLA and take good pictures. We also saw the monument to Louis Armstrong, a native of NOLA. Back we walked along the riverwalk, again heading to the French Quarter, to put on our best clothes and taste a succulent Cajun dinner. The south of the USA is known for its Cajun and Creole dishes.

When we went down we found the cavalcades of the Latin Carnival, so we stayed dancing and collecting necklaces, a practice that goes back to the 19th century (and directly related to the great carnival of NOLA, the Mardi Gras). Initially, glass necklaces were launched, but for a while they have been made of plastic, made in China.

We toured the Bourbon St bars, while they threw necklaces from the balconies. I thought that was only in the mardi gras, but no, we took some grenades in the tropical island, and ended up listening to good jazz in Fritzel's. We crossed again the French Quarter and we had the luck to cross with a wedding, very musical, like everything in NOLA.

The streets were full of art galleries, spectacular houses like the one of Delphine LaLaurie, a well-known assassin of the city, famous for torturing a large number of slaves. There are companies that offer night tours that speak of voodoo, Marie Laveau, ghosts, vampires.

Bourbon Street makes Las Vegas strip look like a child. It is wild. There everything is in excess, alcohol, prostitutes, smells on the street that reminded us of India. In short, it is the authentic American desmadre not suitable for all audiences. Regarding music, the authentic Jazz is hidden from the general public in small venues that it is hard to find among bustling pubs that put their music to the limit.

Undoubtedly, Bourbon St. was once the cradle and source of inspiration for some of the best jazz musicians in the world. There is practically nothing left of prostitution and its tradition and musical heritage. To drink we ordered a beer, a mojito and water, where there was a young woman singing accompanied by several musicians.

Luck makes us sit next to an adorable lady who is the wife of one of the musicians. We were there dancing for a while, surrounded by friendly people from all backgrounds. When the rest break arrives, the lady sneaks into the backstage and introduces us to everyone. The first day and we are already with the famous Southern Hospitality.

We get in touch with our new friend and we promise to meet again at the end of our route. After dinner we walked back to the hostel, very happy with all our necklaces, especially one that I was thrown to me with lights included. 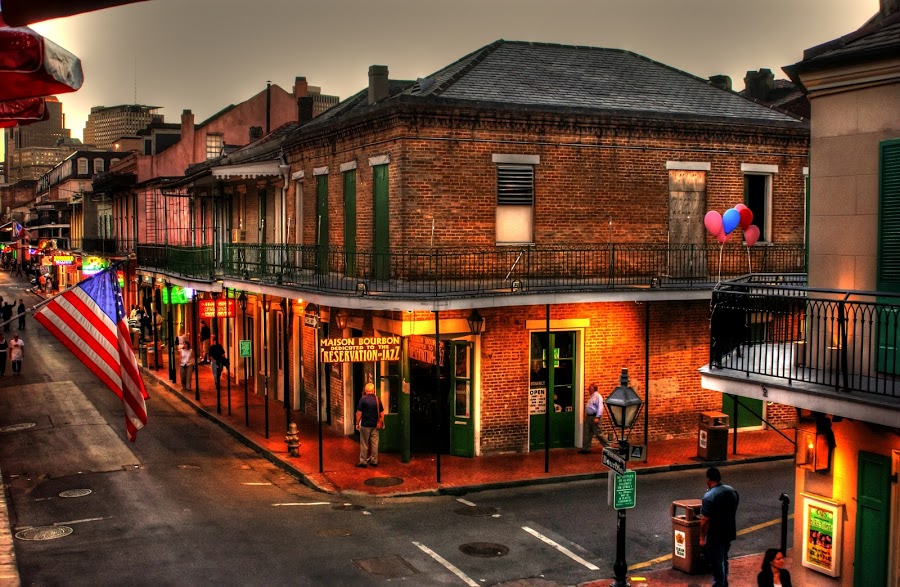 We woke up around 8, got dressed and left the room in search of breakfast. We have breakfast at the famous Cafe Du Monde, to try its famous Beignet, a fried and sugary donut and frappe coffee. Charged with energy, we walked through the French Quarter and passed the Preservation Hall, a concert hall, an institution in the city for promoting traditional jazz for more than 50 years. It is a mystery to me why it does not appear in all tourist guides.

The visit to the swamps was quite good. We were explained many things about the flora and fauna of the swamps and of course, we saw crocodiles in abundance a few meters from our small boat.

In the afternoon we taste cajun food with jambalaya, gumbo, oysters, poo boys, crawfish. We walk along the Mississippi River, visit the cathedral, the voodoo museum, and go shopping. We have more of Cajun food, beers, and of course, enjoy jazz. We went to Canal Street and bought a day pass to use the tram.

We were not able to take it out on the machine so the driver sent it to us. We got off at Washington Avenue, in the Garden District, because we wanted to visit the increasingly famous Lafayette Cemetery. It is small but nice. So in a short time we saw it, and it was full of tourists. We left the cemetery and took a walk around the streets, in order to see the beautiful houses in the Garden district.

We took the tram at the same stop where we had left in order to continue the line to the end. The truth is it was a nice walk, because we saw the Loyola University and Audubon Park. We let ourselves go. In the end the whole line became a bit long, because it was very hot. The tram was full of people and there was a lot of noise.

Once back on Canal Street, we walked to a deli of Sicilian origin, in order to taste the famous muffuletta. In this case, the muffuletta was invented in this place and consists of a sandwich of Sicilian bread round with sesame stuffed with capicola, salami, mortadella, emmental and provolone, in addition to a salad of marinated olives mixed with pickled vegetables.

We ordered a large one. We ate it in the premises, because they have some tables in the background. It was very tasty, and there was not much left over. We approach the Treme neighborhood, with beautiful colorful houses, all different from each other. There is nobody walking around here that shows that it is not a tourist district. After one last walk through Bourbon st. we get back to the hotel.

We like NOLA. It has been quite an experience to walk walking through the French Quarter, to see the Mississippi, to taste the cajun food, to immerse ourselves in the world of voodoo, to walk through the marshes.

The little things that we did not like so much, are forgotten, buried by all the good memories, and now, from the desk of my room the songs transport me back to the South of the United States where I am sure that one day I will return.