At the end of Christmas, this year we began the preparation of the trip to Sardinia. It has been very disappointing to read the threads dedicated to Sardinia by travelers. Sardinia, for us, is the destination with the worst quality information of the destinations we have prepared so far with very little practical information and in its immense majority circumscribed to the beaches of Sardinia and the north of the island.

We fly up to Sardinia, not in low cost flight. Do not forget that Sardinia is not a cheap destination for the Italians themselves. Taking advantage of the airport wi fi, walking through the gallery of shops, we wait for our flight to Cagliari. With some delay, we set foot on the runway at the Elmas-Cagliari Airport at 11 pm.

As at this late hour, public transport to the center of the city no longer worked, we took a taxi from the airport to our accommodation in the capital of Sardinia. In 15 minutes the taxi left us at our first base in accommodation on the island, but not before giving us a business card with his phone in case we needed a taxi during our holidays.

In the lodging, a lady waited for us, a young Sardinian designer always with a sincere smile on her face.

We soon get up for breakfast alone in the kitchen-dining room with coffee, milk, tea, biscuits, cereals, fruit salad, yogurt, mixed sandwiches and toast with butter, jam and honey. At about 10:30 we were already on the street. We went to the Poetto Beach. Honestly, we did not like anything. Around there were many abandoned and ruined hotels, besides it was very windy.

There is a bus from the port that brings us closer to the center. Before taking the bus, as we got off the boat, there is a kiosk where they give maps and information about the city. We stroll through the Marina, the neighborhood that overlooks the port. After entering it we start the climb to the Castello, from the San Remy Bastion to the Cathedral, passing by the Elephant Tower.

The cathedral is very pretty and decorated with different marbles of various colors. Under the altar has a crypt. From there we went to Stampace probably the oldest of the four historical districts of Cagliari, traditionally populated by small merchants and artisans. We saw the Roman theater on the outside, which by the way is so restored that it hardly seems Roman and wandering we went down to the port.

Leaving the St Anne's Church on the right, going up just a little bit, we arrive at the Church of Santa Restituta. For lunch we went to Via Giuseppe Palomba. The Spaghetti alle vongole that we ordered and the crabs was very good. The service was very friendly and attentive. The restaurant is quiet, local and away from the tourist bustle.

After lunch we went to see the Villanova. We walked there until the Basilica of San Saturnino. It looks like a Moorish oasis but we cannot visit it, as it is an archaeological site. We wanted to go to the cemetery and Shrine of Our Lady of Bonaria, but it did not appear on our map and just in case we lost our desires.

We also planned to go to see the Viper Cave, for which we had to catch a bus although it was not on our map either. We took the bus and got off at Viale Sant'Avendrace, practically at the door. We started walking around the city. I did not like anything. In my opinion it has few interesting points and I barely took photos. The truth is that it was a bit disappointing.

The cave is very poorly maintained and is dirty. As the 90 minutes had not passed, we took the bus back, went down via Rome and returned to the ship. For dinner we found a small restaurant by chance. The zucchini and prawns pizza was very tasty and the prawns had a very good flavor. The dough was thin and appetizing.

As for the linguine with prawn sauce and squid, they were good. They did not really taste much though the shrimp that came on the plate and the squid were delicious. In fact we were welcomed with prosecco glasses. It was probably the best thing in the city. With a full belly we went to sleep. 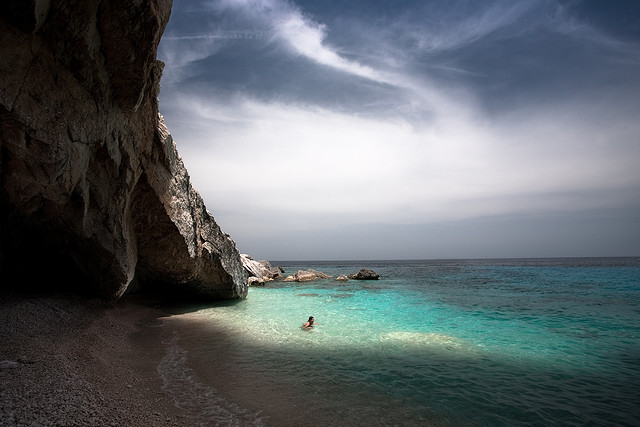 The alarm rings at 9:45. It seems incredible that we manage to get up and organize ourselves, but everything goes well. Some go for bread, others prepare tortillas, others have breakfast and take a shower. At about 11:30 we are ready, but the weather is not as prepared as we are.

We raise our heads to the sky, and we verify that, indeed, the day does not seem that it is going to improve. So we leave with our sandwiches to Alghero. I must warn that we have taken our trip in a very relaxed way. Unlike other escapades, here we only pretended to walk through the cities, so the historical and cultural details will shine by its absence in this blog.

Alghero is beautiful, still covered in clouds. It is essential to walk through its port and its boats docked at the docks. The old city is a wonder of cobblestone streets and alleyways. We pay special attention to the walk along the walls that border it, including in our walk their striking and colorful houses. One of the towers of the wall served as an improvised dining room for our sandwiches, and the panoramic we got could not be better.

We barely spent two hours touring the old city, but while we were having dessert (Italian ice cream, of course) some shy rays of the sun surprised us. We did not have time to run. The best beach on the island was waiting for us. La Pelousa, in Stintino with transparent waters and white sands, faces a small island with a quasi-ruined turret.

We walk to the tower. Already in the tower, it became cloudy again and the rainbow appeared. In a swimsuit and in the rain, we went back to the car. We decided to go to Le Saline beach, also in Stintino. Just past the storm, we are alone on that beach. We found it terribly ugly. For some reason (besides the newly fallen storm) it was really dirty.

We see broken chairs, gardener's rakes, abandoned mats and surfboards for broken children, and mountains of pieces of wood. Our only motivation to visit was to see if it was true that, as we read, the waters turned a magical purple color in the middle of September. Well, mystery solved. The answer is no. No, at least, that day and after that storm.

After that, I return home. That night there was no partying. While we were cooking in the oven, the leads went off. We were in the dark all night. The owner came to try to fix it. She brought lanterns and candles. It was camping night. She cooked in the dark, telling stories of fear, panic that was contagious, and finally, a happy ending playing the television program that marked our childhood.