The origins of Mint Julep remain a great mystery. It is a cocktail with a lot of tradition and history. Although I must say that the origins of this cocktail which is recorded as one of the official cocktail of the International Bartenders Association (IBA) are not very clear. Over time, it has more than help clarify its origin made the history of the cocktail much more diffuse, not being quite possible that we will ever know.

Its first appearance was in a book by John Davis published in London in 1803. Here it was described as a dram of spirituous liquor that bears mint, taken by Virginians in the morning. Davis did not specify whether the bourbon was the liquor used.

Another of its stories is that the Mint Julep emerged in the southern United States, probably during the eighteenth century. Kentucky Senator Henry Clay, took the drink to Washington DC, the Round Robin Bar's famous Willard Hotel during his stay in the city.

Another theory is that the origin of Julep is in the Middle East. For centuries, there was an Arabic drink made with water and rose petals called Gulab. The drink had a delicate and refreshing aroma. It is more than likely that this practice of putting rose petals are made to make the water more palatable.

However, oddly enough, in those days people were not much given to drinking water. It was a last resort because people were used to drink other beverages such as beer, wine and all kinds of alcoholic beverages. Water was used to add bitters, herbs and different spices for flavor, smell and even color.

The word comes from the Arabic "yulleb". This in turn derives from the Persian "gulab," which means "rose water". It is assumed that when the Gulab was introduced to the Mediterranean countries, the native population replaced the rose petals containing the original potion with mint leaves, a plant native to the Mediterranean area already used in many other concoctions as medicinal remedies 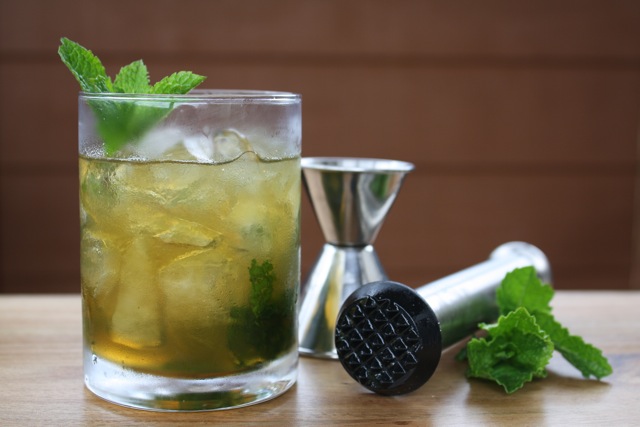 There is no doubt that the Gulab found his way to the New World. It settled in the agricultural regions of eastern and southeastern United States. So it is assumed that the Mint Julep was probably born somewhere in the area. It is not clear of the liquor used in the original recipe. It is very possible that it was Ron, Brandy or Cognac, since at that time there was still no bourbon whiskey.

It was not until the late eighteenth century, and past the Civil War or American Civil War, when definitely in whiskey is incorporated bourbon and in the Mint Julep. From then until now the bourbon is still the main ingredient of Mint Julep, along with water, sugar and mint leaves.

Refreshing Mint Julep became the official drink of the Kentucky Derby in 1938. The Kentucky Derby also called "The Run for the Roses" is one of the most famous horse races in the United States. The Derby winner each year is awarded a garland of 554 red roses. The race is held on the first Saturday of May each year at Churchill Downs, America's most famous racecourse, located in Louisville.

When the cocktail was first used in racing, the name or logo of the Kentucky Derby was printed in glasses of water at a price of 50 cents. Seeing that anyone who took a Mint Julep was carrying the vessel as a souvenir, it decided to charge 25 cents per glass. So the final cost amounted to 75 cents per drink. So was also born the tradition of acquiring these vessels as collectibles by attending the races.

During the Derby and the events held in the previous days 80,000 to 120,000 Juleps cocktails with mint are served. Over the years they have introduced different glasses and cups with the aim of collectibles. Some reach a cost between 750 and 1,000 dollars for being designed in silver and even some made of gold and silver, of course with a higher cost.

In the movie "Goldfinger" in 1964, the 007 saga, the villain Auric Goldfinger offers and shares a julep with James Bond.