We arrive at Ujjain called by different names, such as Avantika, Padmavati during the overcrowded rendezvous of Kumbh Mela. The bus stops and I, rise after about 230 kilometers from the city of Bhopal. Ujjain, the sacred city is at almost 500 meters above sea level on the Malwa plateau. The city is along the Shipra River, a tributary of the river Chambal.

Our guide tells us that it is part of the sacred cities. There are 12, but there are mostly 7 important, especially the city of Ujain. The Maha Kumbha mela is incredible and unimaginable. Imagine, a few million gathered in one place. It is neither more nor less that which is organized every three years for nearly a month in one of the four holy cities in India of Allahabad, Ujjain, Nasik and Haridwar.

The massive rendezvous makes Kumbh mela the largest pilgrimage in the history of mankind. Here we are. Despite the warnings of some and the discouragement of others (the crowd fright, necessarily), we immersed ourselves in the heart of the most popular event in India. Contrary to fantasies, there is no crowd movement, no aggression, but simply thousands of people.

There are untouchables, rich Indians, few tourists peacefully cohabiting in the name of spirituality. More concretely, this pilgrimage has the air of a great festival where a multitude of camps (from the most basic to the most cozy) are installed over hundreds of square kilometers. At the edge of dusty paths, there is drum music, as always, chai, jewelry, pigments, useless gadgets, a little everything and anything.

Everyone organizes his life as he sees fit. Finally, especially as his guru understands. For the one who comes on pilgrimage must find the master to think, if they do not already have it. It is impossible to count, but they are probably a few thousand who claim to be a guru. To convince these souls in pain, they leave the big game.

In the manner of a huge election campaign, posters are posted everywhere. To win the hearts of the faithful, some demagogues go as far as offering 100 rupee tickets or free meals and tents to sleep. For sure, it works. The gurus camps (each of which usually has his own) are full of pilgrims who come to listen to the good word and pray to the god they have chosen (each guru claims to be a god). It is a whole business.

On the other hand, whether you have opted for the guru whose bare body is covered with ash or for the bearded, or the more traditional, dressed in orange from head to toe, you will not escape the bath. It is obligatory to purify one's mind and wash one's sins. One can choose to plunge every day in the sacred rivers or to attend the official baths, defined by the calendar.

These days, the crowd is more dense. It is considered even dangerous for the bath. The gurus are the first to jump into the water at 4 or 5 o'clock in the morning, followed by sadhus. These holy men, under the authority of a guru or hermits, have abandoned everything to devote themselves entirely to their spiritual duty. And finally, the rest of the believers.

While wandering in this huge spiritual area, we made some pretty incredible discoveries. In particular, we see a guru with Russian affinities who preaches the good word in front of a lot of enthusiastic Westerners.

At night, the atmosphere is totally different and very mystical, with a mix between end of the world and an apocalypse. Yellow lights are shining in all corners of the site and the camps are brightening up their Las Vegas style lights. Mist covers tents. Dust and pollution fall as campfires light up and puffs of marijuana (an integral part of the cult) multiply. It is a cocktail that stings the eyes.

It would be easy to summarize this festival by the few words but Kumbh mela is also to be drowned in this spiritual mass, to try to understand its meaning, to observe these ceremonies far from our universe. It is a world, a little crazy that is good to discover once in his life. We leave to find the bus for an evening and a well deserved rest in an ashram. Tomorrow we will make the same trip to attend a puja in the sacred Mahakaleshwar temple.

But that's another story! There will be crowds everywhere. 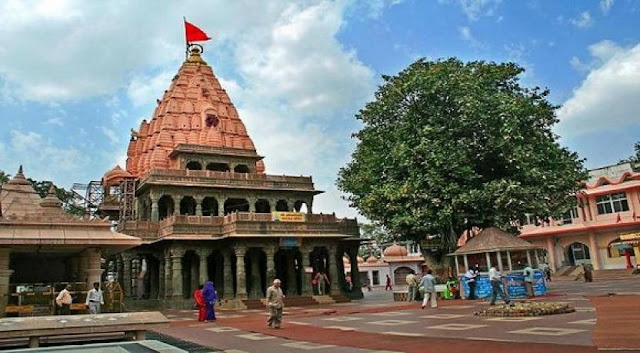