I could not stop writing about this spectacular pagan festival that took place in Edinburgh. It is not the first time I attend. I also had the opportunity to see the Samhain celebration that takes place on Halloween and is organized by the same group of people. The Beltane Festival is the largest of all that this group offers throughout the year.

In fact, they are called Beltane Fire Society (the fire comes from a large number of bonfires that are made during the night). It takes place on April 30, just the day before the beginning of May, and the arrival of summer and the fertility of the Earth is celebrated.

As much as I want to describe here how was this festival, I will not be able to transmit it with the detail I would like. For that reason, I recommend you absolutely to experience it in the first person if you have the opportunity. It's a mix of the show, pagan ritual, rhythm of drums, wild dances, fire everywhere, and transformation.

In short, it is a celebration of the arrival of summer in the most traditional style of Edinburgh. Next, I will try to describe to you as much as possible what that night was like for me. I will accompany my story with several photos.

An airplane brought me back to my beloved Edinburgh. When I left here, I never thought I would return so soon, but I could not forget this city and everything that lived in it. Edinburgh has something that catches up, that makes you not want to leave, and if you leave, I'm sure you want to come back. When I got off the plane and put my feet on Scottish soil, I felt a dizzying sensation that ran through me from head to toe.

Back in Scotland, it was like coming home, that's how I felt. On the bus on the way to the city, my excitement was increasing as we approached the center. When I saw Princes St and the imposing castle again, tears of emotion came to my eyes. I kept telling myself that I was in Edinburgh, trying to be as awake as possible. I had never felt so happy to return to a place.

When I arrived, the owner was waiting for me, who was going to show me the apartment. I stayed in a flat where I had to share a room with three Australians. On the last day of April in the evening, a great party was celebrated in Edinburgh, specifically in Calton Hill, the pagan festival of Beltane. After a huge lunch with sausages, cereals, tea, toast and croissants at the B&B where we slept, we set off towards Calton Hill.

When we got there it was still daylight and while we waited in the queue some of the characters passed by. The truth is that we were lucky with the weather because it made a spectacular day of sun and heat. At dusk, it would cool safely, and more being on a hill, but it was not going to be as bad as last year (from what I was told it was quite cold and wet).

Many of the characters are half naked with the body painted, and it does not matter if it's cold or hot, they have to act like that. I made some pictures of the landscapes that can be seen from there, and although it is not the first time, I could not resist taking more. The truth is that the views from Calton Hill are spectacular and have nothing to envy to those of Arthur's Seat (which incidentally we could see from there).

We approached to see the "storytellers" who were there to entertain the spectators while the preparations were finalized before the celebration began. It was a good opportunity to ask questions about Beltane and hear curious stories about it. Very soon they were surrounded by several spectators, including us.

We continue walking there, enjoying the sunset views. We took a group photo before everything started and we dispersed. From the beginning of the ceremony, we could not all be together because with so many people it was difficult to keep an eye on each other.

The ceremony began at the Acropolis (the National Monument), that kind of Parthenon in Calton Hill. After a while of impatient waiting, the Green Man appears who is like a huge monster covered in leaves. The essence of Beltane is the transformation of the Green Man, who is old and tired after the long winter, in a new being that will celebrate the arrival of summer along with the Queen of May.

The priests of the firelight the fire by hand, using a tinder and a bow, while the whole world is expectant in silence. Once the flame is lit, it is used to start all the other fires on the hill, and thus welcome the summer. The sound of the conch announces the beginning of the ceremony, followed by the drums, which strongly resounded to remind us of those times when Edinburgh was a pagan land where the Celtic traditions were deeply rooted.

It's exciting, it really is, and we feel like we're going back to the past and everything that is now will cease to exist. The characters begin to parade in front of us. The Green Man along with the Queen of May is guided by the Blue Men (their protectors) and escorted by the White Women, accompanied by the rhythm of the drums.

The procession has begun and it goes to the Arc of Fire. Everyone follows it as fast as they can so as not to miss the show. I run with one of my companions but soon it's filled with people around and we do not see anything anymore. That is why we decided to move to the other side of the Arc of Fire, where there are still not many people, to wait for the procession to pass. 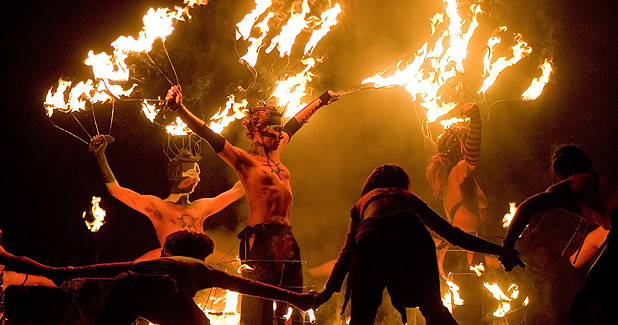 When passing through the Arc of Fire, it is as if they entered another world, and visit the fields of each element: Air, Earth, Water, and Fire, which present them with a gift each. The Red Men, who represent chaos during this night, are attracted to the White Women, who represent order. They attack the procession at various times during the night but the White Women turn them away.

The procession reaches a place where there is a large bonfire where the characters are placed in a large circle. At last the Green Man, animated by the Red Men, decides to touch the Queen of May. At that moment, the White Women kill him and through a ritual, they remove all the leaves that covered him. Lying on the ground, the Queen of May takes pity on him, and with a few subtle touches, inhales life in him.

At that moment, the Green Man is reborn, young and virile, and he is so happy to live again, that he begins to take leaps of joy in a liberating and wild dance. Then the Green Man joins the May Queen to officially start the summer. They both walk to the fire, passing around it three times, and thus winter finally ends to allow the arrival of summer.

At that time a strong wind was blowing and incandescent ashes fell on the spectators. We had to run down the slope to keep the ashes from falling on us. The procession continues to another bonfire and there the real couple receives good wishes and offerings from various groups again. Now, the Red Men, animated by the success of the Green Man, try again to approach the White Women, and this time they manage to convince them to dance together.

In the end, everyone ends up dancing around the bonfire to the wild rhythm of the drums. In another area, there is a group of African dances performing and we also go there to see it. We went home when they were still dancing. We had to prepare the luggage because I was leaving Edinburgh to start my big trip through Europe.

This time it was the final farewell, although for me the first one was more dramatic, and emotionally it was the one that I felt like the last one. I was not going back in Edinburgh in a long time. Now I wanted to explore more places in the world. That was how Edinburgh, Scotland, Great Britain, and everything that lived in these lands was left behind.