It is a very intense day, with many places to visit. After breakfast a taxi driver took us to the viewpoint of the Mount of Olives. The views of Jerusalem, with the Dome of the Rock in the foreground and beyond the Holy Sepulcher, are spectacular. It is the best known photo of Jerusalem.

From here, we made a full walk, downhill, that would take us to the Lions' Gate of the ancient city. The tour lasted us all morning. We visited Dominus Flevit, a small church dedicated to the predictions of Jesus Christ concerning the destruction of Jerusalem. The Russian church of Mary Magdalene was closed, even when it was scheduled for a theoretical opening.

We see the Garden of Gethsemane, place where Jesus went with his disciples after the Last Supper and where he was arrested. Inside it is the Church of All Nations, from 1924 (different nations collaborated in its construction). And the tomb of Mary, in the underground Church of the Assumption.

Once we cross the Lions' Gate we visit the Pool of Bethesda and the Church of Saint Anne in Via Dolorosa. We then head to the first stations of the Via Crucis, from the Franciscan Church of Condemnation and Flagellation, the Church of Ecce Homoo, and the third station in a Polish chapel, at the corner of El Wadi street.

Before going to lunch we still had the strength to visit the Citadel, which houses the Israel Museum and the Tower of David. The museum illustrates all the periods through which the city has passed, summarizing a rich history in events throughout the ages. From the Citadel we can see magnificent views of Jerusalem, both its old part and the modern Jewish part, with the famous King David Hotel and the YMCA of West Jerusalem.

Once we ate and we had our strength in an Arab-Christian restaurant, at the Jaffa gate, we went along the Armenian Patnarchate street, in the Armenian quarter and in the direction of the Zion gate. Halfway through, we enter the Armenian cathedral.

Once the Zion Gate is crossed, the Cenacle is on the left, where is the place of the Last Supper of Jesus Christ with his disciples and the tomb of David, as well as the Chamber of the Holocaust. On the right is the church of the Dormition, where it is said that the Virgin Mary entered into an eternal sleep.

We stopped at the The Garden Tomb. Many people, but especially the Anglican church, believe that this is the place of the tomb of Jesus Christ and not the Holy Sepulcher. They believe it could be the garden of Joseph of Arimathea, in which Jesus was buried before his resurrection. In it there is a slope in the shape of a skull.

Then we went to the Arab bus station at the Damascus gate and we would go to the checkpoint, to visit Bethlehem, in the West Bank (Judea for the Jews). On the other side we expected a good number of taxi drivers, but there were also buses to Bethlehem. We agreed a series of visits to Bethlehem with one of the taxi drivers.

We reach the Greek Orthodox monastery of St. Elias (Mar Elias), where the prophet announced to Mary the birth of Jesus. We then head to the Herod's Temple (Herodion), one of the palaces-fortress of Herod. We see the Church of the Nativity, built on the cave where Jesus was supposed to be born. We reach the Chapel of the Milk Grotto, where it is said that the Virgin Mary breastfed Jesus for the first time.

The visit was very interesting, both for the history of the places visited and for the displacements between these places. It allowed us to see the precarious situation that exists in Palestine, as well as the settlements of the Jewish settlers, authentic impregnable forts.

On the way back to the checkpoint, the taxi driver explain to us and make us notice the unfavorable differences between the Palestinians and the Israeli settlers. He surprised us by stopping about three hundred meters before arriving at the checkpoint.

That afternoon, for being Sabbat and the last one in Jerusalem, we returned to the Wailing Wall, where there were many people. Although there is prohibition to take photos for being Sabbat, the tourists did, without major problem. When we marched, we climbed through the Armenian quarter and left through the Jaffa gate. It was getting dark and more and more ultra-Orthodox descended, with whole families, towards the Wall.

Even through the Damascus gate is in the eastern part, many people came down from the Mea Shearim neighborhood. We walked through the area, very lively, with many young people, many terraces, street musicians. The area is very good, full of restaurants. We had dinner there, in a very charming restaurant, with more modern dishes. After dinner we walked back to our hotel. 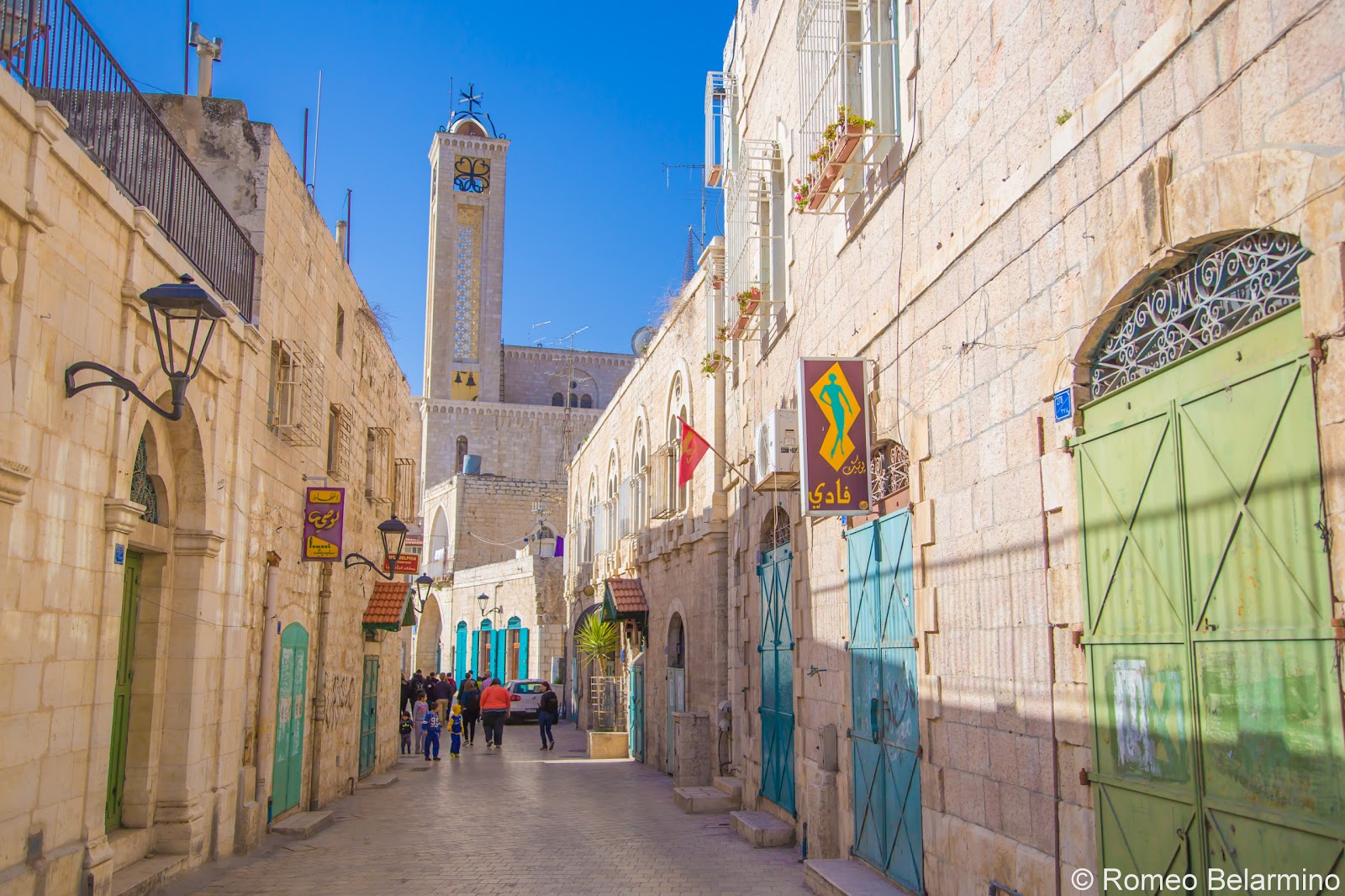