We are in one of the most magical and happy times of the year. Here, thousands of families gather for lunch and dinner to celebrate the arrival of Christmas. Some important dates are approaching in which the whole family gathers around the table to celebrate Christmas, like every year. These are special days indicated in the calendar of all the countries of the world in which the tradition of the whole family being together is present again year after year.

As a good popular tradition, Christmas is also reflected in our gastronomy. On these dates we take the opportunity to put on our aprons and prepare original Christmas recipes. We look for dishes that are different from those we prepare the rest of the year and with special ingredients.

We want to help you prepare your Christmas menus. For this we have prepared for you a selection of simple and above all cheap Christmas recipes designed so that you can surprise your guests with your skills in the kitchen, even if it is the first time that you are going to stand in front of the stove.

In addition, to make it even easier for you to organize your Christmas dinners and lunches, we have prepared a list of our best Christmas appetizers and also delicious Christmas desserts with which you will surely create an unforgettable menu for this Christmas.

If you are looking for specific Christmas recipes, you can also find easy and quick Christmas Eve and New Year's Eve recipes to make at home. In addition, you cannot miss the traditional King cake.

If you don't know what dishes to prepare for the different Christmas meals, continue reading this fabulous list. 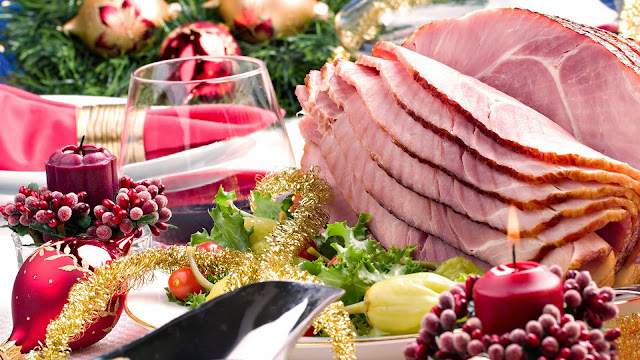 The old cuisine treatises already describe the culinary processes. The air roasting technique generally has two stages. In the first, it is heated and when it reaches a "point", in the second, it is spread with butter and finished roasting.

The suckling lamb is a lamb that has not yet stopped being suckled. This is roasted in a clay pot or in a wood oven, becoming an exquisite dish that is highly appreciated throughout. Another option is the famous suckling pig. It is cooked with the same procedure that we have said before.

2. Loin in salt with chestnut

This is a quick and easy dish to make for Christmas meals. Coarse or smoked salt will not give it an excessively salty flavor, since its function is to protect the meat so that it cooks without drying out. This salted loin goes well with just mashed potatoes, a vegetable sauce or some baked or steamed vegetables. At Christmas you have to be practical and prepare only what works for you and your guests like.

The cooking factor is very important, it is recommended to use a special food thermometer. A very acceptable temperature for a good cooking is when when you puncture the meat it marks 60º. You can invent your own crust: orange or lime zest, spices or nothing: just coarse salt and that's it.

It is a cooking technique by which food (generally cuts of meat) is exposed to the heat of fire or embers so that they cook slowly. The heat is gradually transmitted to the food, which is usually suspended over the fire or near the coals. It is characterized by the use of the oven, traditionally made of clay or adobe, which uses holm oak or oak firewood as fuel.

The preparation will not take you much time. Make three slightly inclined transverse cuts on one of its faces, and insert half a slice of lemon into each one. Add sliced potatoes and half an onion cut into julienne strips. Add water without covering the potatoes and a splash of olive oil. After this, the sea breams are placed, and we bake it at 190º for 45 minutes.

When they take 30 minutes, we can place a layer made with breadcrumbs, paprika and a clove of garlic on the fish. After the next 15 minutes, the dish will be ready to be enjoyed. It is very important to be careful with the thorns of this one, since they are treacherous. This is undoubtedly an excellent recipe to serve as a main course.

Stuffed turkey is another of the star dishes of Christmas, and there are many ways to prepare it. This is a delicious meat and thanks to its size, it allows that with just a roasted turkey and a good stuffing of vegetables, a good number of dishes can be served.

Turkey can be purchased both frozen and fresh, but fresh is always recommended. Also, if you are a first-timer, ask the butcher to bone your turkey. After making the stuffing with the ingredients you have chosen, it is time to sew the skin of the turkey so that it maintains its shape after cooking. It is important that during the two hours that it has to be in the oven, every 15 or 20 minutes we water it with the juice that it releases.

Without a doubt, this will be a sure hit at your Christmas dinners.

On December 26, it is the day of Saint Stephen, and in the homes there is a dish that does not fail on the table: the cannelloni of Saint Stephen. This dish is very traditional, and is prepared as a way of making use of leftover meat from Christmas Eve.

It is a dish deeply rooted in culture, with or without meat remains, it is usually present on Christmas tables in most homes. The way of cooking this meat, combining it with pork liver pâté, makes this dish one of my favorites when it comes to cannelloni.

The best thing about this recipe is that you can prepare it up to a day in advance  and leave it well wrapped in the refrigerator until dinner, at which time we would put it in the oven and give it the final touch.

It is a traditional dish and basic in its gastronomy. It is a festive dish made with whole cooked octopus (traditionally in copper pots). The dish is recurrent both as a first course, as a tapa or as a portion. It consists of an octopus cleaned of its viscera and cooked whole in order to soften its meat. Some prefer to freeze it or hit it against a surface for the same purpose.

As a general rule, the octopus is cooked three times, that is, it is placed in boiling water for a few seconds and removed three times. This technique is called "scaring" and helps the octopus keep its skin once it is cooked.

This dish works great as an appetizer. It is made up of a simple and classic recipe, which each family prepares in the same way but with its own special touch. When buying clams, we will find them in many prices and qualities. Therefore, each one will buy the ones that best suit their situation.

The clams are placed to soak for at least 2 hours, so that the clams loosen the sand. It is also important to change the water every half hour. After this, we steam them so that they open up.

On the other hand, we are making the sauce, to later join it with the clams. After this, we transfer the  clams marinara style  to a clay pot, where we serve them after sprinkling them with chopped parsley. As perfect companions we find a good white wine and a little bread for mojeteo .

This is one of the dishes that should not be missing from a Christmas menu, a starter that will thank both your stomach and your body. A  bisque  is more  of a seafood cream, typical of  French cuisine, which you have surely tried a thousand times, but have never dared to prepare. This can be made with various types of shellfish, it has many variants: lobsters, lobsters, mussels or prawns.

The bisque is originally a stew of poultry or game, strongly seasoned and spiced, which was used as a base for other preparations and which over time was garnished with ecrevisses or river prawns and which today have become its principal ingredient.

You can accompany this spectacular dish with decorative prawns strung three by three on skewers, and with a glass of very cold white wine.

This recipe is very common on Christmas dates so marked. It does not require a very complex elaboration, and the result will be exceptional. First you have to ask the butcher for a small suckling pig, which does not exceed 4 kg so that it fits well in the oven.

This recipe combines perfectly with some poor-quality potatoes, however if you think it will be too heavy, you can accompany it with some lettuce hearts and some tomato wedges.

The ingredients that make up this dish are peeled prawns, garlic and olive oil, nothing more. It is usually served as a portion in bars. This dish is part of the typical dishes of the bar culture. It is so popular today that there are corners where they offer it as a main course.

They are usually cooked in a clay pot where garlic and parsley are previously fried in olive oil , and then added at the last moment. Slices of dried chilli are usually added to give the dish a slightly spicy flavor. Other preparations include a splash of sherry.

They are served directly from the grill in the mud and boiling oil, sprinkled with a little fresh or dried parsley. And they should be eaten quickly , as soon as their temperature allows it, but without getting cold .

The sirloin with sauce is a classic of all Christmas dinners. Normally we do not usually buy this piece of meat because its price is usually high, whether we buy it from veal, ox or foal. This is a dish that hardly has a recipe, just a few tricks with which to treat ingredients such as sirloin or foie with care and care that we cannot eat daily due to their price.

One of its keys is the Pedro Ximénez reduction, which gives it a special touch and flavor. As a side dish, a mashed potato and some cherry tomatoes are enough. Do not use envelope puree for this recipe, as it would completely spoil a delicious dish such as sirloin with foie.

13. Monkfish in green sauce with clams

The success of this recipe, as in almost all fish and seafood dishes, is the freshness and quality of the ingredients. Monkfish is a very popular fish, and most people tend to like it. The best thing about this is that it comes without bones and has very juicy meat.

It is important to ask the fishmonger to cut the fish into slices, and reserve the head. This is because with it we will make a simple and rich broth to enhance the flavor of the sauce. The wine to use must be a Galician white wine.

The monkfish in green sauce with clams should be served quickly so that the sauce is very hot. Its companion will be the wine mentioned above, and a good bread to show off the phrase "this sauce is to take bread and dip".