In the earlier days, spices were crushed with a mortar stone, after which plain water was added to form a paste, if it was to be used immediately or preservatives were added, if it was intended to be used in future too, and then stored in airtight jars. Today, however, with limited or no time available for cooking, but with the mind having the desire to taste and feel the authentic aroma of the food cooked by our mother and grandmother, Tata Sampann> is here to help, with spices developed specially by the cult chef Sanjeev Kapoor.


Do you want know what’s cooking in my mind today? Follow me on this journey to discover the fragrance of a few common spices like the Punjabi Chole Masala, Paneer Masala, Dal Tadka Masala, Chilli powder and turmeric from the house of Tata Sampann that are made using finer assortment of whole spices sourced from the finest spice farms of Kerala.


They have another advantage of giving fresh natural superior quality flavor and aroma, as it retains the natural spice oil which is not drained out before packaging. The absence of natural spice oil also speeds up the breakdown of the flavour, which is why normally available ground spices have a shorter shelf life. Even inside a masala box, it is further separated into individual pouches, which ensures that they remain fresh, fragrant and pure and not get diluted due to constant use.


The very first glance of the spice package that arrived with an embroidery of satin threads and a fabric lace, that wrapped the spice packets in a warm and comforting embrace, gave an enchanting feeling where the mind drowned in the crescendo of soul pleasures and a basket that seemed to savor the smells and flavors of the spices that has been wrapped with great skill.


I try those spices that sing the magic and listen to the answer that will come where every dish gets a special color and a fragrance. And as I feel the aroma of these spices, I see that the spices wait for a lover and a bit of human love, to bring out its exquisiteness, which is eager to come out.


And I found the inspiration for the chole masala with chickpeas, peas and mushrooms, seasoned with tomato sauce, coconut milk and spices that enrich a simple but tasty dish accompanied by naan. For the Paneer recipe, I combined fresh cheese and flavored it with the sauce of spices. There is nothing like this, and for me is the best with a pungent mix of flavorful spices which are not too powerful, but well balanced.


I let myself be drawn to the rich colors of the dishes that lie on my table, with a little bit of aroma and lots of fantasy. The chole masala and paneer masala managed to transport me into a mysterious and magical world where these spices are the undisputed lord, and is far beyond the other spices that I used daily in the kitchen to flavor my dishes.


The wise and creative use of these well known spices has the end result of always giving a subtle aroma, which has more than a violent assault on the senses, which I used fried or roasted, dried or in paste, in the beginning or at the end of cooking, either alone or in combination.


Then there are also the variants of the Tadka Masala, which instead I prepared by adding it to heated oil and when the aroma filled the air I add the sauce obtained to the other ingredients. The Dal Tadka Masala turned a simple dish of boiled rice into a pleasant and tasty meal that can also be taken with pulao, biryani and side dishes.


These spices only increases the desire to cook in these limited times, where I have to juggle between my daily office chores and those few minutes in the kitchen perhaps because of the scent that is released as soon as the packet covers are peeled, with essences that penetrate the soul and soften it.


Tasting the food made from these spices was like traveling through the scents and the magic of North India, where Punjabi Chole Masala, Paneer Masala and Dal Tadka Masala is a part of everyday life, that helped me with a gastronomic rediscovery of ancient and universal value of love that manages to soften the shell of the toughest seed.


If you are tempted to the idea and want to test yourself and can’t wait for the Goodness Ki Shuruaat, you can use these spice mixes from different parts of India that you can replicate in your kitchens and customize according to your taste and that of your guests.


These spices will immerse you in a world of aroma and magic because, believe it or not, these will always arouse a mysterious flavor in the ordinary dishes and this is a Masaledar Sach. 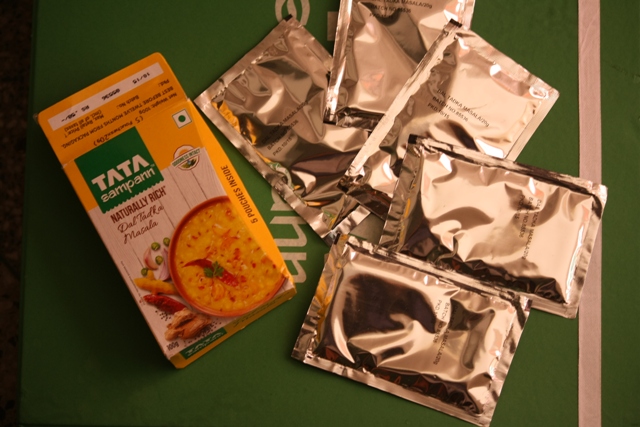