When I found out that we were going to be in Munich during the Oktoberfest I got stressed. That city was the last stop of the trip to Hungary and Germany. I took the flight to Munich but never fanned that going at the end of September was equivalent to going during the Oktoberfest, the biggest beer festival in the world.

A few days before traveling to Munich we began to look for accommodation, as we had done during the three weeks of travel without problems. I saw that everything was full and that what was available was very expensive. It was very expensive to a point that outraged me. It can not be that three nights of accommodation in a hotel cost you up to one thousand euros.

It cannot be that a bed in a shared dormitory of a hostel costs you one hundred euros a night. It was all crazy and seemed exorbitant. And there I realized that it was because the festival with October's name began in September. During the Oktoberfest, the city of one and a half million people receives seven million visitors and that triples its prices during sixteen days a year. My desire to see it was decreasing directly in proportion to the increase in the prices. 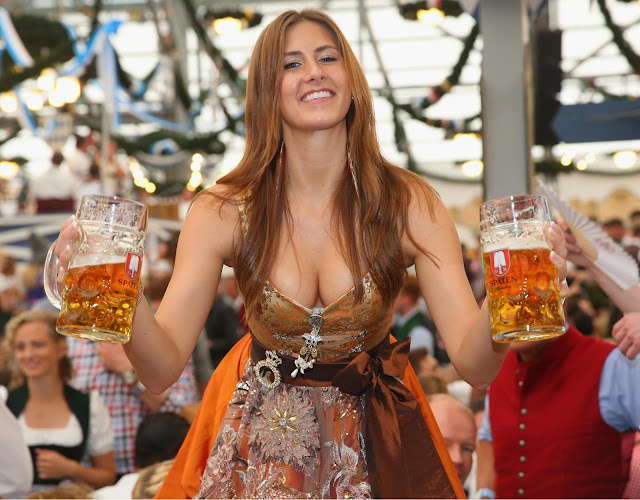 After spending several days among little houses of this style, I did not want to change the countryside around the city.

The trip through Hungary and Germany had been quiet and, in all, cheap. We had stayed in Panzio, the Hungarian pensions, and we had discovered the closest thing to Couchsurfing. I wanted a little more privacy, and renting a room was a cheaper option than a hotel and at the same time allowed us to get in touch with the locals.

A day before traveling to Munich we found, through one of these rental websites, a student who rented his room at a good price. It was not in the center and it was small, but at least we would have somewhere to sleep. There was a boom of offers. Everyone wanted to take advantage of the arrival of people for the Oktoberfest and get a few extra euros.

I thought that I only expected this (which is not bad if one goes wanting to drink good beer).

Munich was a destination that I did not really want to go to but that we would have to go through. It was like an unwanted trip. I was not interested in the city or the festival, all the blame for my prejudices, disinformation, and fatigue. as Munich is one of the cities with the best quality of life in the world.

I imagined it to be boring and full of buildings with logos of businesses. As the Oktoberfest is one of the most popular festivals in the world, I imagined it to be expensive, crowded and chaotic. The only thing I wanted was to enjoy those last days without stress.

In the end, Munich could not be more beautiful.

When we arrived in Munich, I almost apologized for not having wanted to meet her. As our lodging was in the other end, we had to cross it. During the passage I did not stop to repeat, with the forehead pressed to the window: I cannot believe how beautiful this city is. The low-colored houses, side by side, in orderly rows, made me think of London. The green spaces, the lagoons, the trees, the clean sidewalks made me think of Vancouver.

Munich is the third largest city in Germany. It is the capital of Bavaria and is a cultural, artistic and scientific center. And to know that one of the cities with the best quality of life has a lot of colors with forests in the middle and is not full of buildings comforted me. It was not like I imagined it.

It was a thousand time more beautiful.

When we arrived it was noon. There were many people riding bicycles and families dressed in the traditional clothes of Bavaria. Men were in the Lederhosen and women in the Dirndl. Everyone was walking in the same direction. There were large and small, groups of friends and couples. I later learned, they were going to Theresienwiese, the place where the opening of the Oktoberfest was being celebrated. There I began to doubt: What if I go? I'm here on this date, I love beer and who knows when I'll be back. But we had less than two days in the city and a lot to see.

That afternoon we toured the center and took pictures from the viewpoints. We walked through Marienplatz, the center of the city since 1158, and through the rest of the historic center. I was struck by the architecture, the details, the colors, the carved figures, the curves, the mixture of styles, the endings. The city had been bombed and destroyed in part during the war, and then rebuilt respecting its style.

Through the streets, and viewpoints of Munich.

It started to rain. It is something normal in that city so close to the Alps. The good thing was that I was carrying an umbrella, so we opened it and continued walking until it was dark. The next day I met an Argentine friend who I had met in Budapest and who was living for two months in Munich. She had gone to the Oktoberfest the day before. In the end, it was not so hard to convince her.

And when we arrived I was also about to apologize to the Oktoberfest for not having wanted to meet it. It was not like I imagined it either. It was a thousand times more fun. The first surprise is that the Oktoberfest is a retro game fair where you also drink beer. There are roller coasters, bumper cars, circus attractions, giant teddy bears, cotton candy, and hot corn.

The second surprise is that people are dressed in traditional Bavarian clothes. So it's like being in a German movie. The third surprise was since it was Monday, there were not so many people and we could walk well. The fourth surprise is that the beer served at the Oktoberfest has to comply with the Bavarian purity law and it has to be made inside Munich. That's why there are only six factories that sell their product in this festival.

The Oktoberfest was born in 1810 in honor of the marriage between Prince Ludwig of Bavaria and Princess Therese of Saxe-Hildburghausen. The citizens of Munich were invited to celebrate the wedding at the Theresienwiese, an open space in front of the gates of the city, the same where the festival is celebrated today. There were horse races and people attended dressed in their typical clothes.

The following year, an agricultural show was added to the event, in 1850 the first parade was made, in 1882 the first sausage sales stalls appeared and in 1892 beer began to be served. At the end of the 19th-century beer patios and live music appeared, and now, every year, more than six million liters of beer are served. We got on the roller coasters. I hope this cart does not go to hell, we said while yelling with thrill. Even so, it was spectacular. 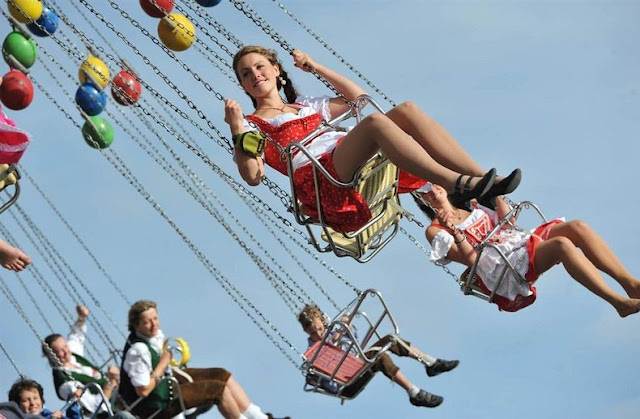 We got on this, which has no curlers like roller coasters, but at each curve it was scary.

We decided to end the day in one of the tents that used to be a beer garden. We looked for two holes and sat at a very long table, along with hundreds of people who were drinking beer. The liter glass we ordered was so heavy that it was difficult to lift it with one hand. I admire the Germans who lift eight of those glasses as if nothing and carry them from table to table.

Around us, people talked, shouted, sang, toasted. It was like being in a giant community bar where we were all friends. Every time the band played, some would go up to the table, others would dance, others would sing in unison and we would all toast with those we had nearby. I wish all the bars were like that.

On the way back we saw some drunks who staggered as they returned to their homes, but nothing out of the ordinary. I walked alone for a while before returning to the apartment. I realized that I had finished the European summer.

I had stayed much of Munich to see, but I was happy that the unwanted trip had become the perfect farewell. Farewell to the summer and farewell to my trips, for a while. Sometimes you do not choose places, but places choose you. I did not want to go to the Oktoberfest, but I had to go the same. Munich will know why.