For your honeymoon in India, what better way to immortalize your mutual love than by admiring the incarnation of eternal love, Taj Mahal? Add to that the splendor of the Mughal landmarks and say hello to a shahi honeymoon. It is undeniably one of the most romantic getaways in India from Delhi and the cities of Uttar Pradesh.

We arrive in Delhi in the morning. The journey had been more than short, and in the plane, the lights remained on almost on the whole trip. We get our bags and go in search of prepaid taxis. This is where we make our first mistake. As none of us saw the price in the guide, we went to take the bus. This one did not stop in front of the station, but passed not far behind.

On the way, we discover the work going on in the capital for the upcoming Commonwealth Games. From metro line to roads, there are construction sites everywhere. The impression is as if the city has just emerged from a war.

The bus drops us on the outer circle of Connaught Place. We seek our direction, and a young man tells us go to the station and offers to follow him. Of course, it was a mistake. We walk a long time and then he shows us a tourist information office. The station is right behind. Here we can have the map and can buy our train tickets.

We come back. The freshness is appreciable. A forty-year-old asks us where we want to go, and then, in the order, tells us that our journey is not logical. We explain to him that we do not have time to put Agra in the end, but he do not stop at it. He makes a call and inform us that there are only two or three trains a day and that they are all full.

He suggests us to go to Varanasi on a car, and that, it would cost us less. Here we are, and it's the scam described in all the guides. Instead of the tourist information office, we are in a travel agency. We come out. It is difficult to disentangle the true from the false in the directions that people give us to reach the station.

There seems to be a number of touts there, and all the way. We finally arrive at something that looks like a train station. There are people everywhere, and noise too. After arriving at the security gate, a man with a serious look tells us that this is not where we should go. He takes us few meters away, in front of what must have been an office.

He told us that the tourist desk was not there, and that we must go further. Yes, of course, the guides also indicated that the argument of the destroyed or closed office might come back often. We go back on our steps. The security guy would certainly have been able to warn us, but he had better things to do.

We turn around, follow the arrows that say to go up to a staircase, then to get off another, before finally arriving in front of this famous office. If we had taken a taxi, he would have dropped us in front of the station and we would have found him right away.

The floor of the station hall is literally littered with bodies. I do not know how many people gather here, and sleep. We look down in the sofas of the tourist office. We watch other travelers enter, and we are obviously not the only ones to say, finally! I tell myself that we will do well to modify the program.

We originally had to spend the first night there, to visit the city and acclimatize slowly. But it is better to go to a more friendly city. I go on a water bottle operation. The train station area is supposed to be the one where we will be looking for a hotel when we visit Delhi at the end of the trip.

We have not even gone 50 meters that we already know that it will be impossible for us to sleep here because everything is creepy and dirty. In hindsight, it was not that much. It was just the shock of the arrival, and the hotels are actually, it seems, a little further. But all the same, there is garbage and dung everywhere. Open channels run through the city.

After squatting for as long as possible in the room full of pale faces, we try to go to the dock, so as not to miss our best way to escape Delhi. Again, everywhere, there are street vendors, and people who sleep. I'm still not confident enough to get my camera out. On the platform, a family encircles us quickly, with a big smile.

They ask us where we are going, and we show the ticket. They tell us that it is the platform opposite. We spent the morning being coaxed, and so we remain suspicious. The train is already there, they insist. Everything seems to match, and we bet to believe them. The train is crowded but is slow, and stops often, not necessarily in the station, and each time, people are eager to cross the tracks, to go up or down.

It is after a long train journey that we arrive at Agra, the city of Taj. Having already booked the hotel, we take a rickshaw. On the road to the hotel, we see a wedding procession with musicians, lights, people who dance, all while walking in the street. The rooms were on the ground floor, with only ventilation of a window on the corridor.

When I asked the owner, if he had rooms with windows, he said he has one with fully open windows. The ceiling fan made a hellish bang, seeming to come off every second. I spend the night turning it on and off every ten minutes as the weather was neither hot nor cold. Moving from a piece of hot bed to a cold bed was only effective for a while. 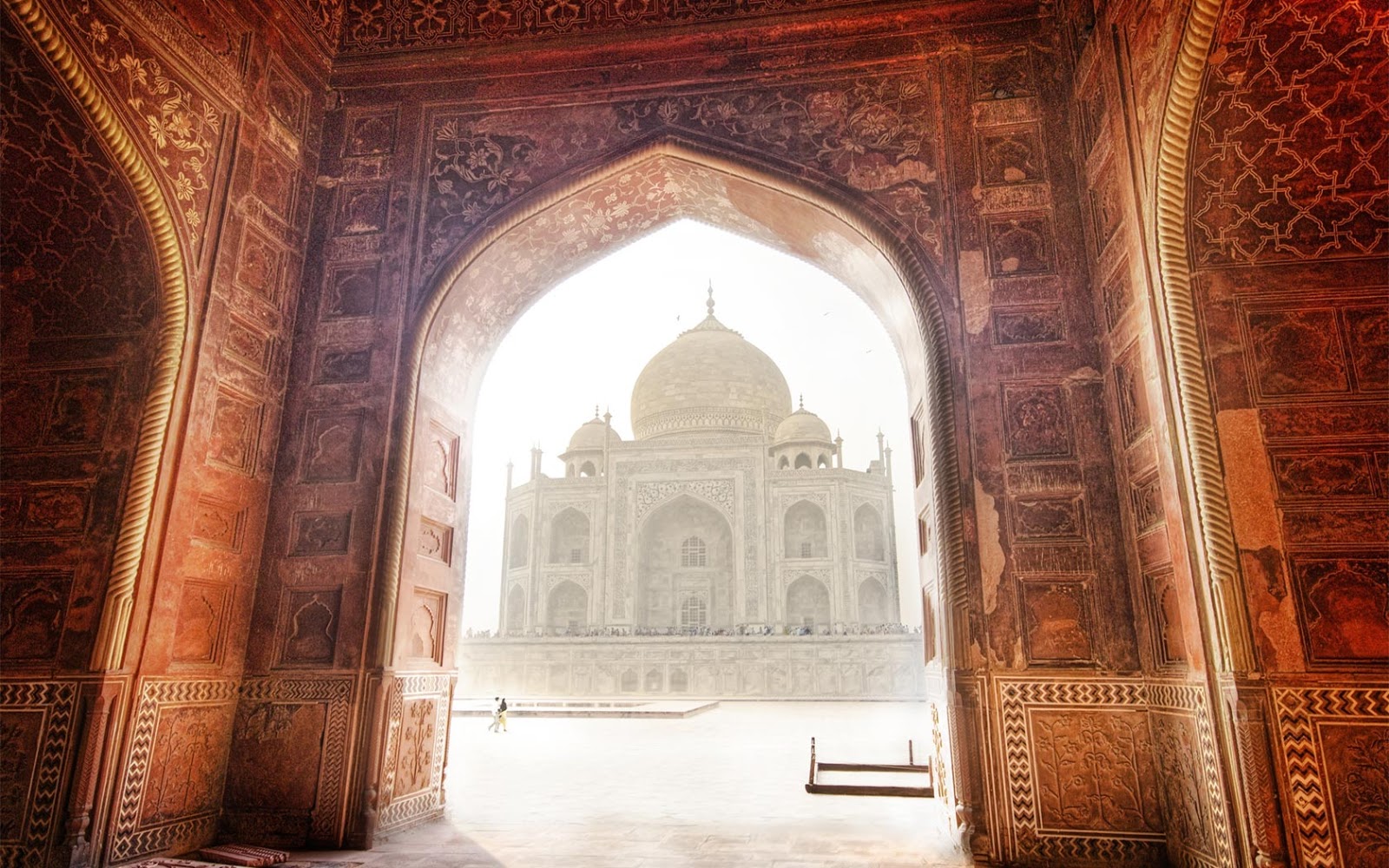 In the morning, we asked for another room, more expensive, but with an air cooler, a fan placed in the middle of wet straw, which balances cold air. It was greatly appreciated. We start the day with the visit to the Taj Mahal. We start early. At 6 am we go during the opening of the Taj Mahal. It is, indeed, at this hour that there are the least tourists.

The golden light of the morning and the pink sky are visible, but briefly because when the doors open the sun is already up. We take our tickets and walk the little distance that separate us from the monument and here we are at the entrance at 7:30. And indeed, there are few tourists which gives us the opportunity to take beautiful pictures!

Finally, as far as my impression goes, I must say that I was speechless. I imagined all sorts of things about this place but I was far from imagining the moving beauty of this incredible immaculate white building. It is by crossing the vault that leads to the Taj Mahal and seeing this spectacular construction that the emotion invades me to give me the goose chair, not to mention the famous sequins that emerge from all of this unreal decor straight out of a dream.

If you ask yourself the question, why are there only pictures of the exterior of the monument and not the interior? The answer is quite simple. Firstly the photos are forbidden inside but also because the interior is not as beautiful as the outside. It is very uncluttered. They are mostly engravings of white flowers on white that we cannot see much and we quickly visit the mosques surrounding the tomb.

There are also a few sentences from the Quran in Arabic on the Taj Mahal facade. The Taj Mahal is especially impressive from the outside. It is a beautiful monument, quite grandiose by the white marble. I guarantee you that this breathtaking white marble mausoleum by the Mughal emperor Shah Jahan in memory of his wife will not leave you indifferent.

We then walk in the local bazaar and go to Jama Masjid. We made up for the delay in the afternoon by taking the auto rickshaw. First we go to the Agra Fort, a magnificent red stone fortress with gardens and mosques overlooking the Taj Mahal. The fort was the last home of Shah Jahan who was imprisoned by his son.

Much larger and more majestic than that of Delhi and of a different style than Jaipur, this red sandstone fort covers an area of ​​about 38 hectares and allows a view of almost 360 degrees on the surrounding area including on the Taj Mahal. Although far away, it is no less magical.

Like a labyrinth, we discover courtyards as well as rooms and other alcoves with different atmospheres as enchanting as each other. For us, it was also the experience to be climbed by squirrels by crumbling cookies on our hands! We then take the bus from the station near the Agra fort to go to Akbar's tomb at Sikandra. This burial is located about fifteen kilometers from the city center. It is an immense monument still, with a lot of sculptures and paintings.

It welcomes in its enclosure gazelles which makes the walk very pleasant. We are in a relaxed and green atmosphere, away from the din and pollution of the streets of Agra. And we go further to see a Sikh temple. Under the bridge over the Yamuna River between the Agra Fort, we see different treatments of the fabric and even see Bollywood film clips.

In the background of Indian music, children, bathers and workers merge to animate this unique place to discover between two visits. We take an auto rickshaw who propose to bring us back to our hotel. For dinner we have the opportunity to taste some local food! I like especially the curd, the raita, and a dish made from a slice of potato, chickpeas and curry sauce made before us in a brew.

The rain comes, and it feels good. We visit the tomb of Itimad-ud-Daulah, more commonly known as Baby Taj. Resembling a small ivory palace, its architecture with fine detail and detail deserves a lot of time. Then we walk in the market and the streets of the city. People smile at us, ask for photos, laugh when they see themselves on the screen, even if they rarely smile during the photo.