The tomato soup is a very tasty and easy to prepare dish of classic international cuisine, made with best tomatoes, red and fragrant, of all qualities and sizes, garlic, basil and plenty of oil. Eaten in winter as hot soup, tomato soup is equally inviting and tasty during summer at room temperature, served sprinkled with basil leaves.

As often happened with simple dishes, even tomato soup has undergone some minor variations applied to each family, according to personal taste, as for example, the addition of fried onions or leeks or onions, carrots and celery. Try it for a fine dinner.

The tomato is native to the area of Central America, the South America and the southern part of the North America, today the area included between the countries of Mexico and Peru. The Aztecs called it xitomatl, the term tomato indicated various fruits similar to each other, usually juicy. The tomato sauce became an integral part of Aztec cuisine.

Some claimed that the tomatoes had aphrodisiac properties, this would be the reason why the French once called it pomme d'amour, apple of love. This root is also referred to by the name of apple of love. It is said that after its introduction in Europe Sir Walter Raleigh would have given this seedling charge of its fruits to Queen Elizabeth, and called it by the name of apples of love.

The date of his arrival in Europe is the 1540 when the Spaniard Hernán Cortés returned home and brought the specimens; but its cultivation spread and waited until the second half of the seventeenth century but only later, finding favorable climatic conditions in the south of the region, you have the color change of its color from the original and distinctive gold color, which gave its name to the plant, the current red, thanks to selections and subsequent grafts.

Initially it was thought that it was a poisonous plant because the grass looked like nightshade Solanum nigrum. In fact, in front of the doubt, was adopted along with the potato and the American, as a decorative plant. The richest of these foods were situated in foreign vases that adorned the windows and courtyards.

The first tomatoes that arrived in Spain were planted in the garden of physician and botanist Nicolas Monardes Alfaro, author of the book Of the things that are brought from indie related to the use of Western medicine (1565 - 1574) first tomato is understood as culture with healing properties. Gradually it was realized that it could have used pharmacological and gastronomic. 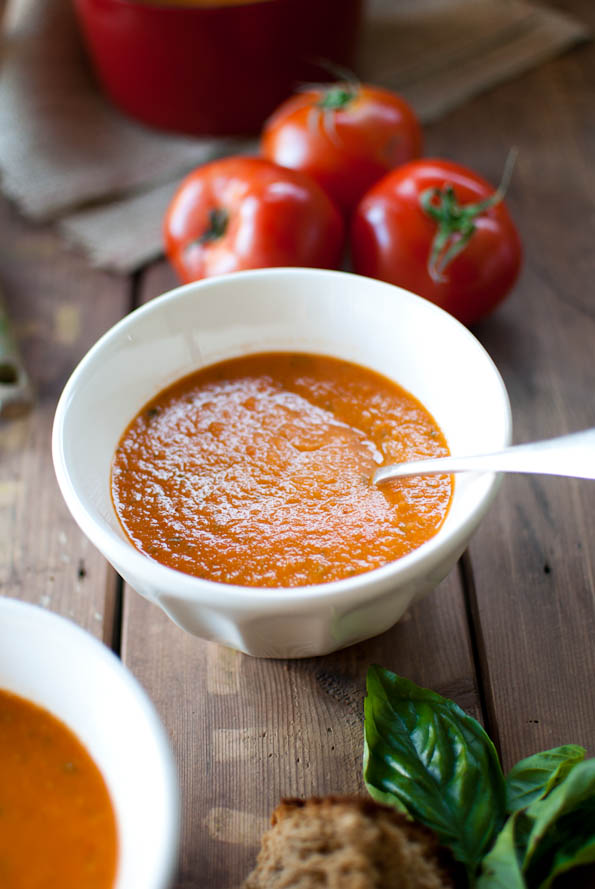 Puree the mixture in the blender and season with salt, a sprinkling of pepper, a small teaspoon of vinegar, cloves, milk, cream.

Stir and serve this delicious hot tomato soup. Decorate with fresh basil and a sprinkle of parsley, a dollop of whipped cream and accompany the soup with toasted croutons.