Romantic cobble stoned streets, cozy sidewalk cafes, dreamy canals, ivy covered houses, historic churches, charming market squares. It really does not get much more lovey-dovey than this popular city in Belgium. So if you are wondering whether I was visiting Bruges in Belgium with my significant other, going on romantic canal rides and eating Belgian chocolates, I will have to disappoint.

I traveled through Europe this winter with my parents. Not exactly your ideal travel companions in one of most romantic cities in Europe, but I did not let that bother me. Instead of strolling hand in hand with a significant other, I traipsed after my parents, my role models when it comes to relationships, having been married for over 35 years.

It took us about 40 minutes to get to Bruges from Ghent. We left the car in a parking lot located right next to the hotel that we had booked and we did the check-in. It was not clear to us that they will let us enterso soon, because we had the time of entry at 12.00 in the morning. There were still a couple of hours, but they did not give us any problems and we were able to leave things at the hotel before start touring the city.

When we arrive in Bruges, we realize that the city is much smaller than Ghent, and as easy to walk on as the previous one. We left in the direction of the Minnewaterpark or the Lake of Love, a quiet and romantic place full of swans and ducks. Here we spent some time until we reach the Beguinage (Begijnhof), an area today inhabited by the nuns of the Order of Saint Benedict which is located right next to the park.

The access to the patio of the Beaterio is free. Around this patio there are a series of small white houses destined to house widows or single women who lived a monastic life. Along the Beguinage and the Park, there are several horse carriages to visit the best known places in the city. There is a quietness and peacefulness here that compliments the whitewashed houses and makes for a nice stroll away from the busier city streets.

On the way to Simon Stevin Square we passed by the Church of Our Lady (Onze Lieve Vrouwekerk) which houses the Madonna with the child created by Michelangelo. At first we had intended to enter to visit but the price of the ticket seemed expensive so we left without seeing it.

From there we go to the St. Salvator's Cathedral, the oldest church in Bruges. Here we also had the intention of entering to see the interior, but this time we found it closed. I thought it would be for the hour, but we returned in the afternoon to see if we had more luck and still could not visit.

We continue walking, visiting lots of chocolate shops but we did not buy anything. I still haven't found what I was looking for. We took the opportunity to eat a pizza buffet. A little later we arrived at the beautiful square of Grote Mark, the main square of Bruges, and perhaps the place that I liked most of all we visited on this trip.

The square is surrounded by beautiful buildings and it is the belfry (Belfort). We thought about going up to see the views of the city but here, unlike in Ghent, there is no elevator, and that day we were not very motivated to climb its 366 steps. Right next to the Grote Mark is the Burg Square, in which is the City Hall and also one of the most important places in Bruges, the Basilica of the Holy Blood (Heilig-BloedBasiliek).

When we arrived there were about twenty minutes for the basilica to open. So we decided to take advantage of the time by entering a chocolate shop located right next to the Basilica, where you can see different metal boxes to fill them with assorted chocolates. We bought one and the chocolates were, of course delicious and then we keep the boxes we choose as a souvenir!

When we finished visiting the beautiful Basilica of the Holy Blood we wandered over to Rozenhoedkaai, which is the most photographed spot in all of Bruges. This corner and this channel goes out in practically all the guides of the city and it is one of the most known corners. The site is undoubtedly beautiful, and from that point some of the boats that run through the canals of the city.

Looking across the Dijver River at the old cobble stoned houses, with the Belfort Tower in the background, it is easy to see why this is the quintessential spot. Between the canal boat line ups and the vast number of photographers taking their shots of the most photographed spot in Bruges, I managed to get a couple of photos as well.

Then we wander a bit aimlessly through the streets of Bruges, next to the canals, until we reach the park (Kruisvest) where the four mills that are still preserved in Bruges. We toured the park a bit and took some pictures next to the mills. Two of them could be visited inside (Sint Janshuismolen and Koeleweimolen) but not when we were there. For a change we found them closed and we could not enter any.

We decided to go to dinner at Philipstockstraat, one of the most recommended places to have dinner in Bruges. When we arrived we were told that we had to wait about 40 minutes to get a table because it was completely full. So we left.

At night we went through the same illuminated streets. Bruges has a special charm when it gets dark. The channels, the squares, and the streets looks different and even more beautiful at night. 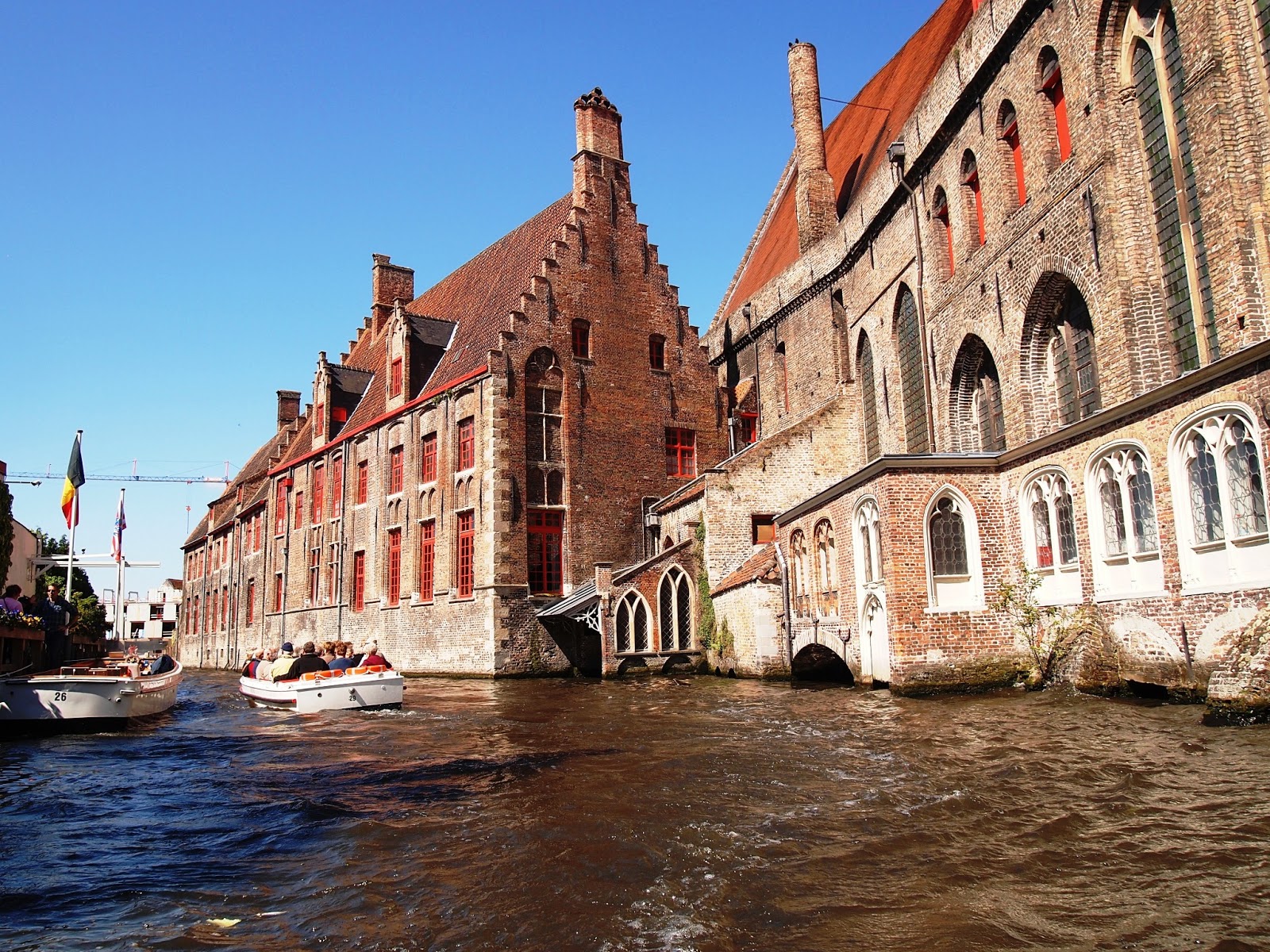 We woke up pretty early, and Bruges woke up covered in snow. We left the city about 8 in the morning and two hours later (30 minutes later than planned) we arrived at Charleroi Airport. We stopped to fill the petrol car tank before returning it, and left the car in the parking lot. We had breakfast at the airport and at 11.30 we embark in the flight without any problem or delay.

What I really loved about Bruges the most were the quieter places I found when I wandered away from the main city center. The still canals, deserted bridges, cobble stoned streets, old narrow alleyways, and intricately carved stone facades on the houses really pulled me into the charming atmosphere.

It was here, in these places, where I could truly sense the romance of Bruges. I'm a sucker for old cobble stoned alleyways and this one was no exception. I love the colors of the yellow wall, mixed with the hints of green from the flower pots, along with the various shades of burnt orange and brown bricks.

Would I visit Bruges again? Yes! With all the romantic architecture, beautiful cityscapes, and charming canals I could have easily spent a few more days here discovering the area.