Holi, also known as the festival of colors celebrates the arrival of spring and therefore the end of winter. Celebrated everywhere in India, it is an opportunity for people to sprinkle colorful pigments on each other while dancing and feasting in the street. It is especially the day of the year when all the Indian society mingle freely with each other.

Having heard about the special events, I absolutely wanted to be part of it and live with the locals. So I decided to go to Mathura, in the state of Uttar Pradesh, on D-Day. My choice was on this city because it is an important pilgrimage center. It is said to be the city of birth of Krishna.

During my journey by train to Mathura, I observed in each village was a fire reminding the Holika Dahan, a demon burned by Vishnu. It is after this fire that the festival of Holi begins. The train arrives in Mathura half an hour late. I pick up an autorickshaw to my hostel.

Before the day came to an end, we were already covered with powdered colors. Of course as I wanted to be well-prepared, in addition to numerous colors, I bought a cheap outfit, which I can certainly never put on again. The conclusion was then a huge buffet with all sorts of Indian delicacies. 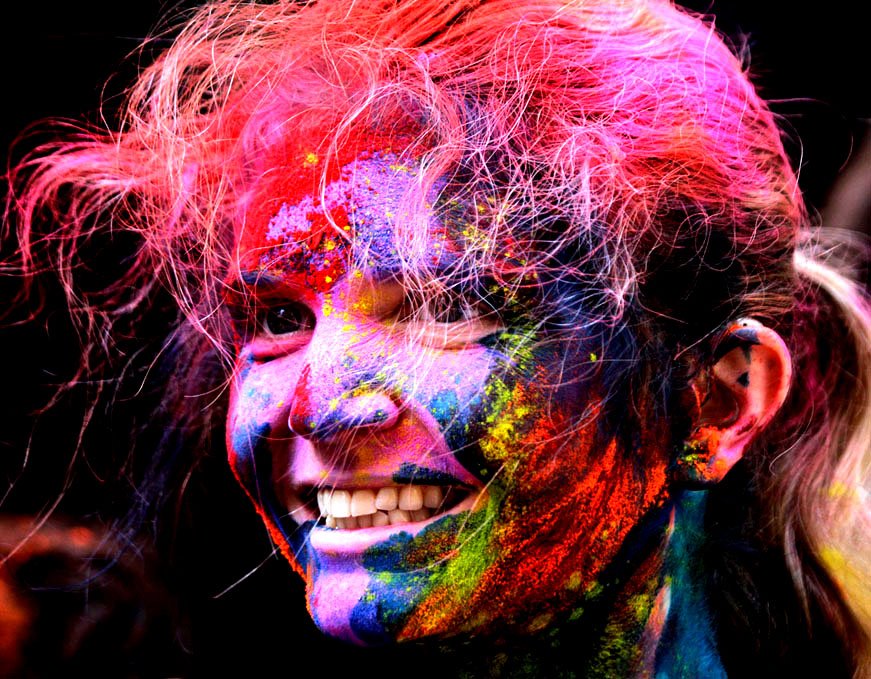 In the morning, I woke up to the sound of drums, as groups of people roamed the streets calling everyone who was
hesitant to leave their houses and participate in a fun war of color. I take a quick glance out the window to see that Holi was in full swing. Children ran through the narrow streets of the small town and fired themselves with bright colors that fused on the body.

Arriving on the road it did not take long until I was dipped in colours. With my favorite clothes on, I decide to just take pictures, but this does not work out. Every tiny spot on the skin was immediately targeted and fired. The local children surrounded me. The children smack my face with the various color powders and an old man pulls me onto a pedestal where I'm thrown with flowers and start dancing.

From above, they fired at everything that moved. The fact that I got the most out of it did not bother them much. In the heat of the moment I sought a second shooter to help me in the battle. The hustle and bustle was accompanied by extremely dedicated drummers, who beat their drums as if into a frenzy to remind even the remote households of Holi. Thanks to numerous tips I bathed my body and my hair in coconut oil right at the beginning.

Contrary to belief, it was not organic colors but chemical colours used to color garments that are not entirely harmless. We had already bought the powder, usually colored with dyes, which is called Gulal, day before at a booth on the market, where the zealous saleswoman full of dedication explained to us which color of what importance.

It is no surprise that even weeks later paint remains on the body to an unforgettable party. While strolling through the narrow streets of the city, I attend a surreal show. All the shops are closed, and it's amazing to see this huge city usually so teeming at rest. I meet many people completely sprayed with colors.

The drumming came closer and closer with a deafening noise of rhythmic beats, shrieks, cheers and laughter. Now there was no way back. And since I did not want to be completely unprepared, I mixed a little paint with water in a plastic bottle and stuck a small hole in the lid.

It is in these moments that one realizes the richness of this culture. The oldest man in the family starts the celebration by throwing a little colored water on his relatives, which gives the younger ones the opportunity to do the same. The kids bombard people with water and everyone daub each other with color powder.

The Bollywood dance show began. The choreo was not always in sync, but that did not spoil the mood filled with anticipation. After two hours of music, Bollywood dancing and delicious sweets, the Holi festival came to the part we had been waiting for the whole time! Those who did not long for the start at kick-off were now full-powdered from top to bottom with the mix of food coloring and powder.

In the afternoon, I head for Mathura's most important Krishna temple. Outside, women and men gather in a circle around a group of musicians playing sitar and drum. People sing with their hearts, paint themselves with colors and embrace each other. An incredible atmosphere emerges from this place. I am moved and I realize the luck that I have to be there, accepted by the locals who do not hesitate to cover me with pigments and wish me happy Holi!

In front of the temple, there were many stalls where we could buy paint. We also bought two packages and rushed into the fray. But we hardly progressed. Literally after each step, we heard Happy Holi! And we returned the greeting, including color painting. We had to serve countless selfies and Facebook live broadcasts, as we were one of the very few tourists in this place.

Painting with color is not only fun. At the same time everyone looks deeply into each other's eyes with a smile. The air was full of music and color dust. Whenever the ceremony progressed, the crowd burst into frenetic cheers. The background noise was more like a football pitch than a temple. Everywhere were happy and cheering people.

A priest paints a tilak of orange color on my forehead. This moment I already get the next batch of color powder in the face. When I can see clearly again, drummers challenge me to dance. Then I jump on a car and drive a bit along. There are a few seconds left to think and grasp what is actually happening around me. Then the next color cloud hits me.

Even the police could not and would not resist the many colors. In the end, everything was dipped in a purple-reddish color. Elke was barely recognizable. After about two hours we went out. The shower afterwards lasts almost longer than the party. I am lucky and can relieve my whole body of the colorful colors except for small parts.

Other people are worse off, because days later people still meet me with a bright red face and colorful hands. The Holi festival has left its mark, not only in Mathura. During the meal we see several tourists with very colored clothes. I packed my backpack again and went on the same bumpy journey back to Vrindavan.

Photographically, this day was one of my toughest challenges. With extreme contrasts in the temple, and color dust, I had to protect my lens, and a variety of colors, with which even my EOS 5D Mark IV really had to fight. A blessing was that this camera and my 24-70mm lens is dust and splash proof. So I just had to make sure that my lens was clean.