We could have told you about Amritsar much earlier. The Wagah Border Ceremony happens at the only land border crossing between India and Pakistan, the two countries that fought a merciless war over Kashmir territory.

The simplest way would have been to go there from Dharamsala. It was mostly me who wanted to go. At that time, Amritsar was isolated from the rest of our desires and we had not yet planned much of our trip. We put Amritsar aside saying we'll see later. We finally waited to arrive in Rajasthan to hit a tedious trip to Punjab.

Upon arrival in Rajasthan, the trend was reversed. Drunk with the discomfort of transportation, I was ready to sacrifice Amritsar. We studied all the options, that is to say the car with driver (too expensive for us) and the sleeper bus. Logically, we chose the second option.

It may be hard to believe when I get there, but Amritsar will remain one of the best memories. Yet the city is ugly. All its colors disappeared under a layer of dirt and spread over the sad walls in shades of gray. As often in India, there are two cities in the city. There is the modern city that we have just crossed with its posh shopping centers and its roads populated with horns.

There is the old city that we have more widely surveyed, with its labyrinthine streets, mangy dogs and atmosphere of another time. In fact, Amritsar is a bit the opposite version of the picture of Dorian Gray. Deep in the abyss, from the black heart of the beast sprang beauty.

Sikhs hold a significant place in the history of the country. Before meeting them, I did not know much, and I cannot wait to learn more. Rarely has religion seemed so welcoming, respectful, and benevolent. Let me explain. We went directly to a pilgrim hostel where we knew that visitors were welcomed free of charge.

A young Sikh introduced us to the place where visitors were welcomed. There are three-bed rooms, rather rudimentary but with lockers and a shared bathroom. As we had arrived at lunchtime, we wanted to go to Guru Ka Langar, the canteen where Sikhs offer a meal to all their visitors, regardless of caste or wealth.

We asked our way to a tall elegant Shikh with beautiful blue eyes, giving us big smiles and led us to Guru Ka Langar. There, he went to another Sikh to guide us inside the building where thousands of people eat continuously at any time of the day. This experience was truly unforgettable, especially as the thali offered by the Sikh community was really good.

In the process, we made an appointment with the driver of a shared jeep to return the same day after the military practice at the Wagah-Attari border with Pakistan. The driver was over an hour late and we were starting to wonder if we had been ripped off as we had paid in advance. He finally come after a vain search to find a last passenger to fill his vehicle.

We left with four others at the border post and arrived right on time for the show but at the bottom of the stands, as many, had preceded us. I will try to explain with my own eyes what the ceremony consists of. The music starts. A soldier starts to set the mood! Soldiers, in ceremonial costume, follow each other, marching at a pace to the frontier. This happens alternately on each side.

The gestures are exaggerated, in order to impress. This parade has more to do with the effervescence of some sporting events. What we are witnessing is totally improbable, when we know the tensions that can reign between the two countries. It's a real cockfight before the closing of the door, and the descent of the flags.

An Indian soldier and a Pakistani soldier shout loudly and for a long time in a microphone before lifting the leg as high as possible and advancing all the way to the door. At the end of about twenty minutes, the doors of the border open. The flags are lowered simultaneously, to be then folded and brought back each of their side. The ceremony is over.

I did not really understand the stakes of the tradition, but it was really nice to see. Everyone was totally excited about this fight, and sang and danced! It was crazy enough, and a great moment of patriotism. I have the impression of an absurd mixture of diluted military exercise ready to swing into a wrestling match.

After this big nothing, we return to the Golden Temple that we still have not had time to visit. I decide to go alone to the temple at night. The place is beautiful and it is the first time that I feel at this point the influence of the sacred.

Even Benares will not have left me so alive. The play of light and fairy contrasts. There is the calm despite the affluence, with the beauty of the religious songs broadcast outside the temple. I go back to bed amazed by what I found. 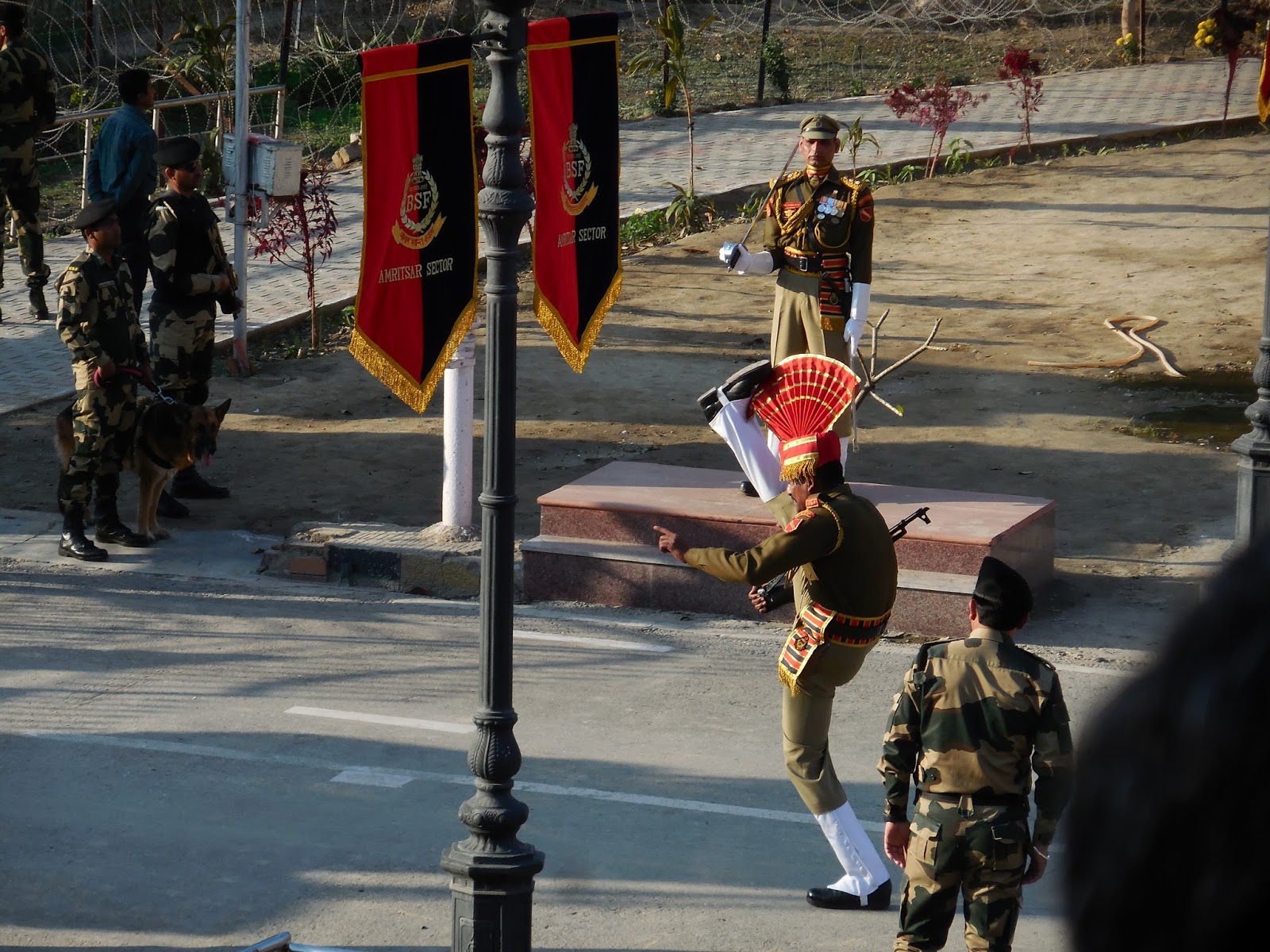