We travel to Shirdi, which is about 200 km from Pune. We were in Shirdi on Guru Purnima, an important Indian festival that always takes place on the full moon in July. Unfortunately, the ride was not without obstacles. After 70 km the bus had a breakdown and came to a halt. We had to go outside, where the sun was burning at 41 degrees celsius from the sky. A tree was nearby, where it can hold about 60 people in the shade.

After 4 hours, many telephone calls and repair attempts, we board again but only for a short time. After 100 meters the driver calls another bus, which then arrived after half an hour. The new bus had a very strong AC, adjusted to 16 degrees celsius but was unregulatable. So we travel in the cold for another 3 hours. We borrowed warm jackets and scarves from the neighbors.

The atmosphere in the group was remarkable. No one complained despite all the adversities. Patience and mutual care prevailed. Thanks to the generous supply of homeopathic remedies already on the bus, nobody was ill. The real size of India is only one of the bus trips. On the plane, you fly 4 hours and is still in India, but an 8-hour bus trip is very little. This does not concern the distance. A distance of 120 km can take 3 to 5 hours, although you drive on the highway.

The number of gods in India increases per 1000km road network. This can get understood when the driver tries to undercut the above travel time by a bus without break. And one sits in the rearmost compartment of the same. We had such a driver, such a bus and such roads. To pray to a deity is no longer enough, believe us.

Those who survive this will also survive the emerging X forces of a fighter jet in the air battle. India has exactly the same reason for a big air force. All trucks and bus drivers are potential fighter jet pilots.

Shirdi is now in sight! The bus driver gives a test drive. The Tata bus starts for the landing approach, because of the last ground wave. But first, it has to clean the garage with air-ground missiles of monkeys. The conductor thanks us and later gives us chai.

Before we arrived, we asked our tour guide if we would recognize Shirdi by some suburbs. If one were to travel through the wilderness forever, a larger city would be able to imagine it. He only meant that Shirdi is a small village and so has no suburbs.

Shirdi is a place of pilgrimage. Shirdi Sai Baba has his temple here and that is why we are here. Otherwise, there's nothing to see in Shirdi. At least we would not have noticed. The streets are very very dirty and life generally very easy. The city itself was anything but small.

We reach near the hotel. As we get off the bus, half of the staff are waiting for us. Most striking is the security guard who carries a large headdress like a rooster. Our luggage gets carried to the room and we get a welcome drink. We are standing in the large hall with an aligned dome in the center to get a nice view. For the first day, it was so pretty. We take ample rest after dinner. 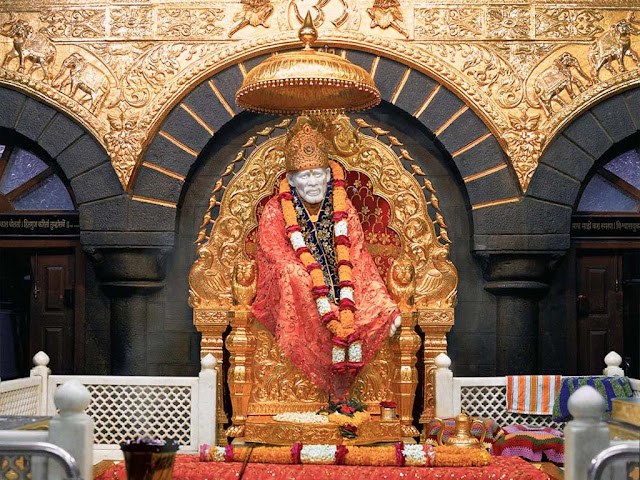 We went early to the temple which is only a few minutes walk from the hotel. There are crowds of people. We take the VIP entrance to get a little faster. There are so many heads of the old and young. And many stares, laugh and nod at us. We walk, completely dressed in white and barefoot. Finally, the black blends with the whites and we find ourselves in the midst of black eyes and hair.

Step by step, we continue to a white marble statue of the Shirdi Sai Baba. Shirdi Sai Baba lived for many years as a beggar in Shirdi. At first, the village population refused him, which only changed when he began to heal cures. Then more and more people from abroad sought his advice.

Shirdi Sai Baba always left open whether he was Hindu or Muslim. His motto was all men are equal, all religions are equal in the core. The air is humid. Devotees sing, scream, cry and laugh. The highlight of everyone is the bowing and touching of his gold feet with the third eye.

We sat on the ground in one of the courtyards that surround the tomb of Shirdi Sai Baba and sing Bhajans. Immediately crowds gather around us, singing with their full throats. This gave a very nice feeling of unity and understanding. Then we continue to the back exit, where Sai Baba got buried.

There are four flames, underneath the neem tree, which has been burning for hundreds of years. Here we bow before his Lingam and then sit to meditate. People also chant mantras.

The process takes about two hours. We have some coffee nearby and then take the rickshaw to the hotel and rest. Until about mid-afternoon, then we had lunch. Later we decided to travel further into the city. Behold, we find a vegan cafe, few meters away. We are happy now and they actually had coffee beans!

But the surrounding area of the temple was not much beautiful. A round of the temple was there, then it was dark again and we wanted to go back. But there was still time for a glass of sugar beet juice with lime. We buy some souvenirs. We also made it to the temple to go to the Dwarkamai. It is the place where Sai Baba, for a long time, has lived.

We went late evening since over the day the crowds were too big. We could make ourselves comfortable when the sirens were out. We had a lovely evening in a beautiful restaurant garden with a delicious meal under palm trees. We go up and down to the hotel.

At 5 o'clock in the morning after a short breakfast, our bus went back to Poona. This time it was without any breakdown and we reached to take the flight to Bangalore on time.