Rameswaram is an isthmus located in South India only about thirty kilometers from Sri Lanka. Rameswaran is one of the Char Dham, the four pilgrimage points. It is even called Benares of the South! There are many pilgrims. People come to perform rituals and ablutions in the temple and on the ghats on the beach. It is not in the Ganga this time, but in the sea that the pilgrims bathe.

We get up very early at 4 am because we have to take the 5:30 train from Madurai to Rameswaram. We have tea and take the toasts prepared for us! The kolam was being made in front of the entrance of the house. They are ephemeral drawings that every woman carries out carefully to welcome and bring luck. They are made, freehand, leaving the rice powder, flowing from their fingers. A taxi takes us to the station, located far enough away from the neighborhood. The train arrive 30 minutes late.

It is really worth it to come to Rameswaram by train because the arrival is fantastic. It looks like the train flies over the sea. In addition, the doors of the train are open and the tracks are only a few meters above the water! The island where Rameswaram is located is connected to the mainland by the Panbam bridge, named after the fishing village. There is a superb view of the fishing village below with all the boats lined up and men unloading fish.

After arriving, we leave in search of a hotel. There are very few tourists here. The city lives from and for spiritual tourism. Hotels and restaurants compete with the number of temples, ashrams and supposed gurus. Especially with the heat, the smell of fishing has invaded the city and a scent of fish floats on Rameswaram.

The streets are lined with ice cream vendors, small restaurants, bike rental stalls, religious souvenir displays, shell mirror shops and travel agencies. In the street, tiny horses pull wobbly carriages, while beside them donkeys run smoothly with cows who take advantage of their status to scratch bananas at the entrance of the temple.

The women, as always dressed in bright multicolored saris, chatter in front of an ice cream or a glass of hot milk. As for men, almost all in traditional dhoti doze in the shade. Most of them bear on the forehead the three horizontal gray ash strips of Shiva, the god in the spotlight here.

We finally take a room at the most chic hotel in the city after hard bargaining and getting a substantial discount. At the hotel there are only large rooms but it's clean, very quiet and well located, close to the sea and the ghats. The city center with the temple is 5 minutes walk. The room overlooks a shared balcony and, around the hotel, there is a large space that serves as parking.

After settling down we go to the hotel restaurant. The meals are served on a banana leaf, with rice, spicy vegetable curries, and a pappadam. We leave to visit the Ramanathaswamy Temple. The city is organized in a circular way around the Ramanathaswamy, the main temple. The temple is very special with its long corridors lined with columns with grimacing and colorful faces.

In the temple, there are 22 wells where the pilgrims pour water on the head to each of them. It is prohibited to take pictures inside the temple. We celebrate the baptism of the new elephant of the temple, just five years old, but who already knows very well to bless the faithful at the command of his mahout. But this devotion does not convince everyone, especially the followers of Vishnu. Many at the entrance of the temple sell the Bhagavad Gita.

We leave the temple and take the street just opposite to go Agni Theertham, a piece of sea where people come to immerse themselves to purify themselves. We find a religious fervor less oppressive than temple and despite the sacredness of their actions, the atmosphere is more joyful.

In the afternoon we decided to go in search of the famous Adam's Bridge of floating stones. I rent a motorcycle and go to the tip of the island, Dhanushkodi, the famous end of the world. After crossing a pine forest, the road ends and I have to continue on the bus which passes there. The people who accompany us in the minibus are very friendly, and they even offer ice cream! The road is very sandy and bumpy surrounded on both sides by the Bay of Bengal and the Indian Ocean.

As far as the eye can see, we see only egrets searching the sand and crows perched on shipwrecks half buried. We arrive at the end, in Dhanushkodi, a village that was destroyed by a cyclone, as well as the railway line that arrived there. The vision of the remains of the village (including the train station, the post office, the church with its altar) is quite moving. There are many tourists who do rituals on the beach. It is here that the Indian Ocean joins the Arabian Sea and the Bay of Bengal.

It is forbidden to bathe here as it seems that it is dangerous. We tried to breathe at the rhythm of each of the waves and see which one we felt most comfortable with. Sita was no longer waiting on the other side or Rama. Nor were there traces of kings or gods. There is only me and a blue sea that stretched around.

The stroll along the seaside is nice, especially at sunset. We walk beneath the full moon in the warm air of the starry night. In the evening, we go to eat at the restaurant where we feast on an onion dosa and fried rice. And for dessert, we buy some pastries filled with honey. Another big day of road awaits us the next morning to go to Kanyakumari. 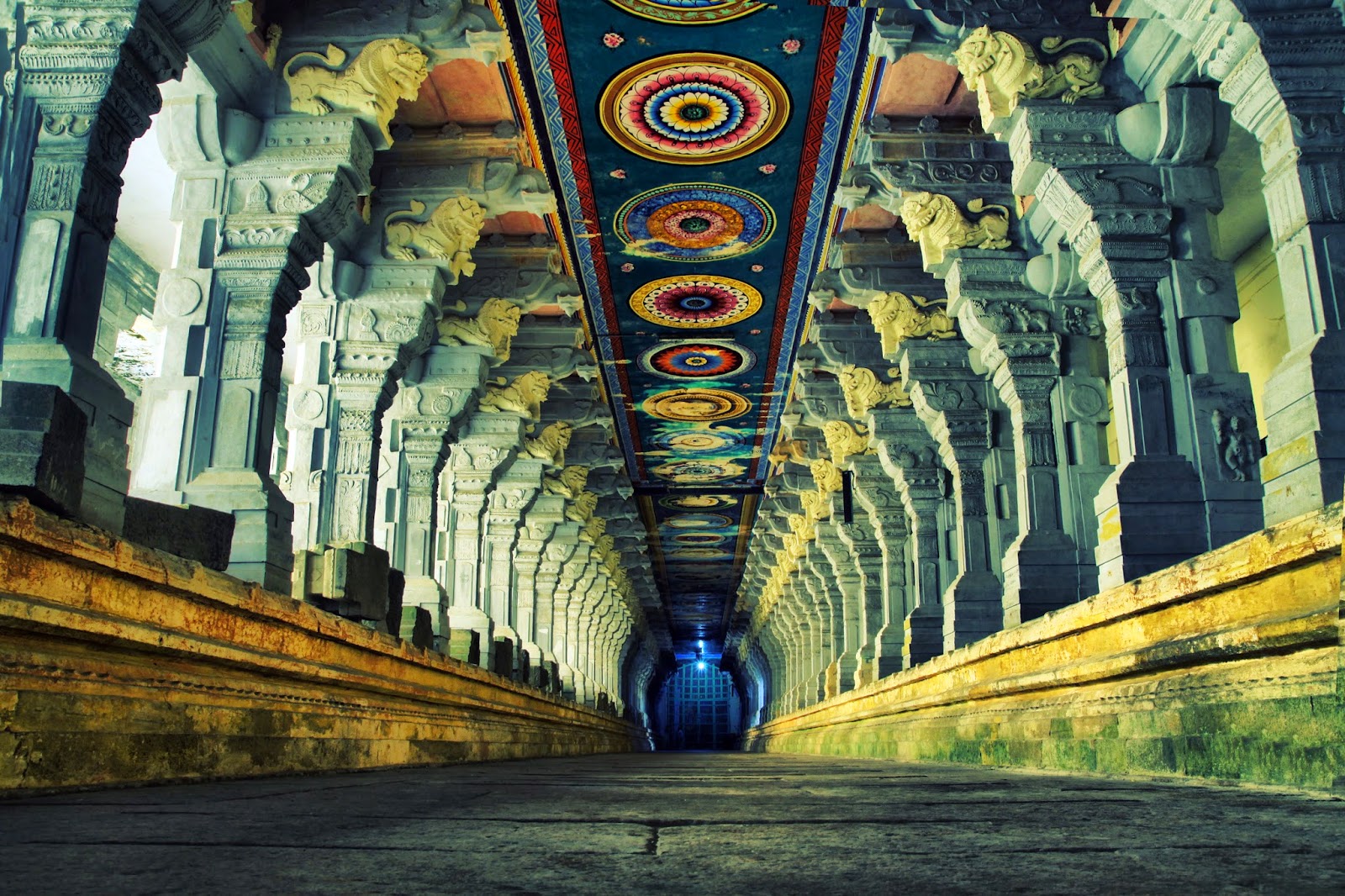