Pindi Chana is a dish based on chickpeas steamed with masala sauce, ginger, herbs and spices and is traditionally served with Bhaturas, Plain Naan, leavened bread baked on the walls of a clay oven. Of course, all quite as spicy Indian cuisine includes curry, cumin, coriander, garam masala, dominate the other flavors, but it is tasty.

The chana masala or chole masala is a dish of the region of Punjab between India and Pakistan, spread across the South Asia. The main ingredient of the dish is the chickpeas, but also onions, tomato pieces, turmeric, seeds of coriander, garlic, chilli, ginger powder, mango dried seeds of pomegranate and crushed garam masala. The result is a dish slightly moist and spicy, with a hint harsh given by citrus.

The dish is very popular in the region of Punjab, between India and Pakistan, but also in the regions of Sindh and Gujarat. In areas of Gujarat and Rajasthan is commonly cooked dry with spices and spicy. In India it is commonly consumed together with Bhatura, a bread fried. The approach is called chole bhature and is generally sold in stalls on the street, but you can find it even in restaurants. In Pakistan it is instead sold the variant aloo chole, made ​​of chickpeas and potatoes, served as a snack or appetizer in big cities like Karachi and Lahore.

Synonymous with curry, the masala is, according to Indian tradition, a mixture of spices cleverly combined. In the kitchen, almost sacred place in this culture, the preparation of spices is a central moment. Traditionally done as much as possible in contact with the ground on a table of stone or wood, on which the grinding is done with a granite stone, which is the symbol of the hearth.

The combination of spices and herbs must be different depending on the dish to which it goes. It could be so sweet as to make every single spice distinguishable in its aroma or strong enough to irritate the slightest touch the taste buds. It can also combine 60 different spices. Remains the hallmark of every good home cooking. The masala can be dry the spices are roasted or in salsa. The dry preparation is typical of the northern regions and is obtained by grinding the spices in the long grains on a granite plaque with a large stone, while preparing sauce adds a wire vinegar, water or coconut milk, consuming, however, the dressing the same day.

Pindi Chana is a strong and spicy chickpea curry recipe from the city of Rawalpindi in the heart of Punjab in Pakistan. It was created prior to the partition of India and Pakistan, hence the name Pindi. This dish is very popular in northern India. It is prepared in a potpourri of dry spices, such as anardana powder, and amchoor or dried mango powder, which gives a strong and pleasantly bitter taste.

Chickpeas are a staple of the Middle East, Africa, and Indian cuisine. The two best-known varieties are desi chana and Kabuli Chana. You can also find 21 other varieties in different colors and different shapes. The wild version of chickpeas is found only in parts of southeastern Turkey and Syria. It is likely to be first cultivated there, about 10,500 years ago. Chickpeas are legumes have a high nutritional value, and were part of the agricultural culture that arose from the Neolithic.

The Desi Chana is small with dark seeds and rough skin. It is grown mainly in India, Bangladesh, and areas of Pakistan, Ethiopia, Mexico, and Iran. The Kabuli Chana is lighter colored. It has larger seeds and is cultivated mainly in southern Europe, North Africa, Afghanistan, India, Pakistan, and Chile. 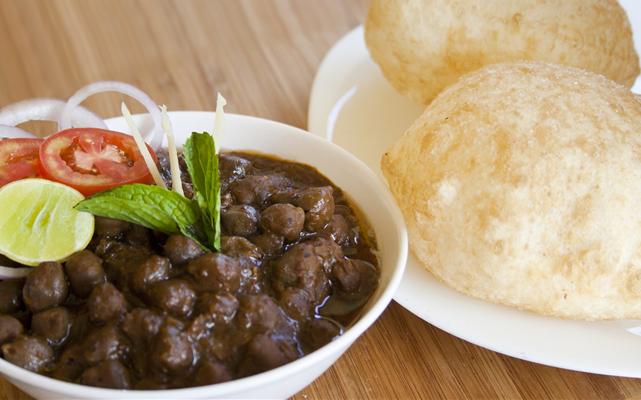 The Desi Chana is also known as Bengal gram or Kala chana or chole. The Kabuli chole or Safed Chana is believed to have come from Afghanistan. The Desi chole is probably the oldest, as it closely resembles the seeds found both in archeological sites and is the wild ancestor.

Desi chickpeas have a markedly higher fiber content than the Kabuli chola. The desi type is used to make Chana Dal or Chana Masala, which is a recipe for split chickpeas. It can be made with dried chickpeas. The chickpeas need to be soaked the day before, but for the sake of simplicity and to save time, canned chickpeas are often used. If you use dry chickpeas, you must soak them the night before and boil them before using them in the recipe that I propose to you next.

The Pindi Chana is a healthy meal when served with Kulcha or Naan and a green salad. It can be taken as the main course. I take it as an accompaniment to tandoori chicken or mutton kofta and accompanied by naan or rice.

Cook the chickpeas with salt and water in the cooker for 30 minutes. Drain, reserving 1 cup of water.

Add chickpeas, water, salt and half of the coriander leaves. Simmer, uncovered until the water has been absorbed. Add tamarind extract. Mix and cook till fairly dry. Keep aside.

Serve hot with naan or rotis.