Traveling through the aromas of spices can transport us to many parts of the world. But among all of them my weakness makes that if I have to travel to a place, that is Hyderabad. I have never been there, and I doubt that I ever travel to such distant lands. But who knows? Meanwhile, I stay here enjoying what I can find in cookbooks, what my eyes discover on the internet or what a restaurant serves on my plate. Not long ago I discovered the Mutton Biryani.

It is a preparation in which despite being the mutton that supports the name of the recipe, it is the rice that transmits all the richness of this dish. The yogurt in which the meat is macerated softens its fibers, making the mutton juicy and enriched. The aroma of the spices in which the rice is cooked floods the environment. So much that it gets intoxicated in such a way that you do not want anything else but take the time to enjoy it. Fascinating!

Although nowadays it is considered as a typical dish of Indian cuisine, however, its origins are found in Persia. The recipe has evolved as it has traveled across the length and breadth of such an immense country. It thus adopts the different ingredients of each area. So that we can find not only mutton biryani but also with chicken, fish, prawns, vegetables. Even the processing technique can also vary. We can find meats that are not cooked separately, but they are cooked together with the rice. 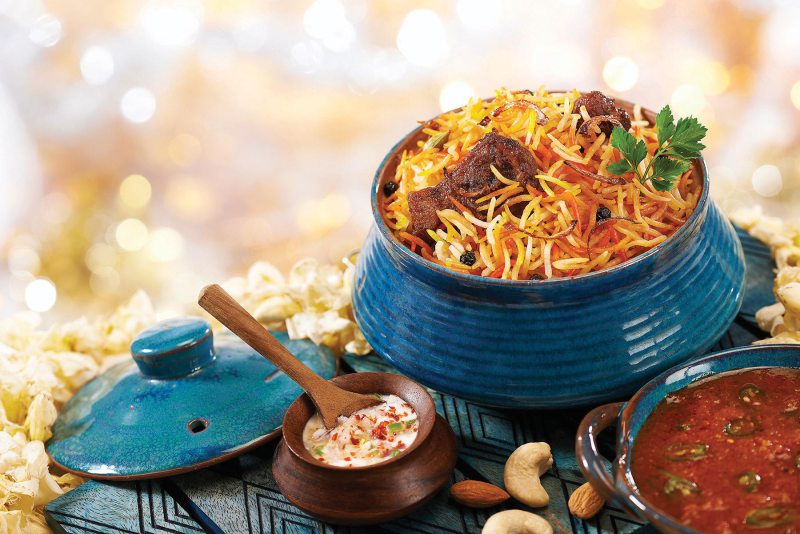 Originally, the rice was steamed, in a sealed pot. But as we already imagined, the kitchen has evolved so much that even the elaboration techniques have done it when introducing new kitchen utensils. The biryani is a dish of Indian cuisine, made with a mixture of spices as well as basmati rice, meat or vegetables, nuts, and yogurt. There are many varieties of biryani and each type has its unique characteristics.

The origin of biryani is probably Persian because the name of the dish comes from beryān which means fried before cooking. It may have a connection with the Turkish Pilaf. The dish considered suitable for the upper classes, during the Mughal Empire was disseminated and made available to the humblest classes. At present, it is a dish closely linked to Muslim populations in India and is usually made with vegetables.

This dish is usually vegetarian. It is called Tehari, but it allows for chicken, turkey or lamb meat. The difference between the biryani and the pulao is that while in the pulao the ingredients are cooked together, in the biryani it is customary to cook the rice separately from the other foods. The dish is usually served with raita, korma, some curry or a dish of brinjal or aubergine. The recipe is original of Deepti Golani, a Hindu teacher based in Barcelona, a great cook and a better person, good people.

The dish can be adapted to western tastes with meat, even pork or veal although this is unthinkable in India. In turn there are many recipes of biryani that add other species such as cumin, bay leaf, cinnamon, chili or pepper. This recipe with spices, vegetables and nuts is called Shahjahani Biryani or Mughlai style.

Remove the cardamom seeds from the pods and crush them in a mortar until well ground. Put a skillet or casserole over low heat with a splash of oil and cook all the spices for 3 or 4 minutes, stirring occasionally. Cut the garlic sprouts into thin slices and cubes of about 3 centimetres. Add a little more oil in the pan, rise to medium heat and add the garlic and lamb. Cook until the meat changes color for about 3 minutes.

Add the basmati rice and lightly fry it for a minute so that it soaks up all the flavors. Mix the coconut milk with the water and add it to the casserole or frying pan, at this time add two pinches of salt. Cover it, bring to a boil (medium-high heat) and when it starts to boil, lower the heat so that it cooks very slowly between 12 and 14 minutes.

Toast the rolled almonds in a skillet without oil and over medium heat. Cut the dried tomatoes into irregular pieces and the coriander. When the rice is done, uncover it and add the dried tomatoes, coriander and raisins. Mix well and decorate with toasted laminated almonds.

Tips for the recipe

The spice mix: The biryani is prepared with many spice mixes, do not worry if you are missing any of the ones that we have put in the recipe, you can substitute it or make the dish without it. Other widely used condiments for this typical Indian recipe are: clove, bay leaf, ginger, mint, saffron or cinnamon. Don't be afraid and try different combinations.

The lamb: With the cooking that we have given it, the lamb has been "like butter", very soft and perfectly cooked. It is important to remove any nerve or bone well before chopping it so that it is soft and easy to eat.

Other meats: Lamb gives this biryani recipe a very special flavor, but if you don't like it, don't hesitate to substitute it with your favorite meat, and can be made with chicken.