At dawn, we go to the bus station where we found seats! Obviously, we were going to less populated areas of India. The road to Devprayag was majestic, advancing above gigantic voids. Above us were dizzy mountains. In any case, the gods were with us. Our friend had offered us a bead of protection that we had around our necks before we left.

With a locket with Shiva on our chest, what could happen to us? We had our comprehensive insurance! We arrived in the afternoon at Devprayag. The bus dropped us off on the road overlooking the village that was nestling on the mountainside on the edge of the Bhagirathi river and the Alaknanda river. Bhagairati which descends from Gomukh, seems more peaceful, more feminine and of blue-gray color, and Alaknanda look more fiery, more powerful, rolling its clear green waters towards Rishikesh and mixing with the sacred sangam to become the river Ganges.

The tourists really began to get rare. On the side of the road where the bus left us, there were many small huts nestling in the gray rock of the mountain. We looked for a hotel, but there was none. Only the mandirs could offer us a roof to sleep. A priest accepted to accommodate us in a dormitory planned for a few hundred pilgrims.

He even offered us tea. It was even colder, as the sun was setting. Despite being ungodly, he invited us to share his meal. Then back in our gigantic dormitory, we wound up quickly in our mountain duvets that we cursed a few days ago. We were ready to leave them in Delhi. Now considering the almost polar cold, we were really happy to have them here. We slept like babies!

Before sunrise, our host came to wake us up with a very hot tea that was very comforting. We spent the day in the streets of the small village below the road. We inquired as to which of the two rivers would follow us? Indeed, the sources of the Ganges were not really defined. The climb along the Bhagirathi river was fast abandoned.

We could have gone towards the road to Gangotri but apparently the snow and landslides would prevent us from following this river. We soon realize that the inhabitants of the three valleys claim the origin of Ganges springs to attract the pilgrims to the declared source! So we set off along the Alakananda river, and we would then take the direction of Badrinath or Kerdanath.

We quickly saw the old pilgrim road, following the river, on the opposite bank to the road. We calculated that it would take us two days to reach Rudraprayag! We returned to spend the afternoon at the foot of the village, at the edge of the water, as close as possible to the place where the two rivers met. At the time, the place was not laid out, because in a cave near the river, a sadhu lived there.

We sat down with him and his two disciples. We smoked and we shared their lunch. We discussed everything and nothing. He had decided a few years back, once his children married to leave his work, get rid of everything, and devote his life to meditation. He wanted stop the cycle of his life, his reincarnations and reach nirvana!

He is a true sadhu, who gave us his blessing for our journey to the sources of the Ganges. He found us atypical, as wanting to trek there was not common and apparently it pleased him. We promised to come back to see him when we returned from the peaks of the Himalayas! With his protection but also rather zen or thanks to the waves of chilums that we had shared with him, we get back to our mandir somehow!

Our guest recognized immediately the mark spread on our forehead by the sadhu, guardian of the river! We dined with him and then fell asleep very quickly! We definitely felt more and more close to the gods. 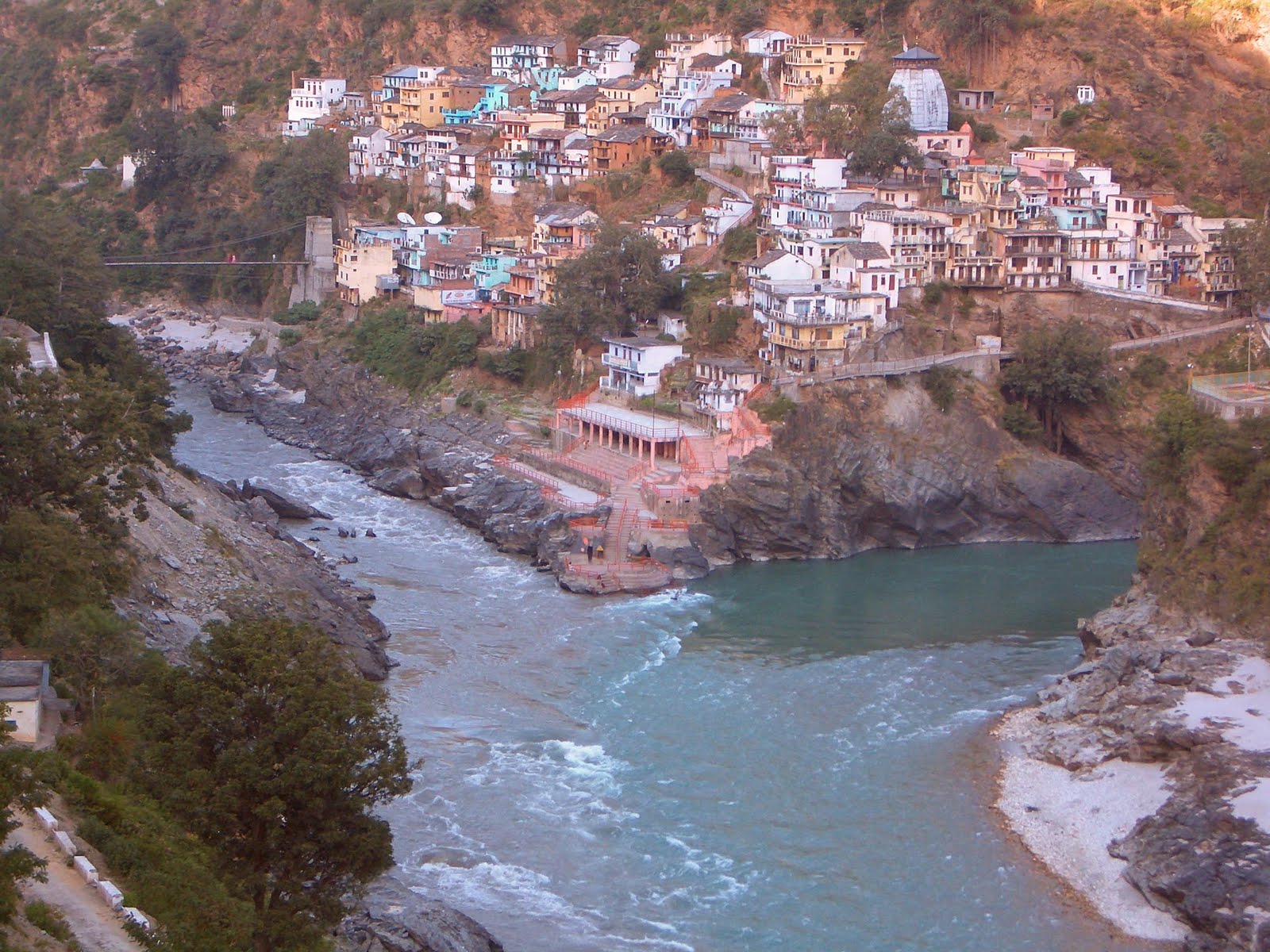 The icy tip of our noses and our bodies numb with the excesses of the night before. We were hardly able to get out of our bed when a limpid sky began to appear slowly behind the steep mountains surrounding Devprayag. From our dormitory, we see our priest, guardian of the mandir, heating, probably water on his kerosene stove. He heard us wake up and came to offer us tea. We warmed up somehow our cold hands by holding the hot glass.

We left after a last offering. Loaded with our bags, we went down to the cave of our baba. We greeted him and we go to the path spotted the day before. The beginning of our pilgrimage seemed difficult. We were somewhat paralyzed by the cold and febrile nature of the excesses of recent days, but with the onset of the sun life began.

Walking on the mountainside, leaving the river below, on the other side, we could see the road with its jeeps and its buses. Even if the traffic was not really crowded, they had the annoying habit of honking and then to remind us that we were still in India. We were advancing, certainly in the heart of nature, but always very close to civilization, too close to our taste.

We crossed villages where as usual women reigned supreme. We were often offered tea and even cakes, but unlike Nepal, women were rather suspicious, more submissive, more reserved. In the evening we stopped near Srinagar. The path, after crossing the river again, was then one with the road.

We found a guest-house, a pretty little house run by a German who was not there for that matter! On the other hand, we had the pleasure of enjoying a bathroom equipped with a water heater! I have no more memories of this evening.

We hit the road. The closest suspension bridge was a few kilometers away! Our acrobatic crossing took us all the time, and we were late. Surely, we could not reach Rudraprayag the same evening. Indeed, just before sunset after passing a last village and thinking that we could not reach the suspension bridge before the dark night to reach Rudraprayag, we had no option.

We trusted people that we cross and notes taken before our trip. So we decided to sleep under the stars. We had everything from dried noodles and energy bars as well as tea. We found a place in the middle of the forest where the slope was not too steep and especially not too far from the road. Sleeping in the jungle did not really reassure us.

A fire was made to heat water. The cold was winning us and we were hungry. On the way below many men were returning to their respective villages. Often, they stopped to look at us and to share a conversation around our fire. We arrived to eat and the fire needed to be fed often because we found very little dead wood.

We found only leaves and light branches not far from the camp. There was no question of going too far from the fire. The fire would die quickly for lack of supplies. The night began to encompass the valley and the lights of the small towns and villages on the other side of the river reminded us that civilization had not disappeared.

The fire was still valiant when a group of men (the last one by the way) passed by and stopped to warn us that it was not good to sleep like that in the forest. There were tigers, and leopards! We nodded but we felt that they surely exaggerated. They told us to come to the village, the last one we left behind in the late afternoon.

We were not reckless but stubborn. We decided to sleep outside, so we would sleep on the edge of the jungle. Disappointed and taking us for crazy, the small group left. The night was now really deep and truly silent. Only a few cries of birds were lost under the starry sky. Our stock of wood was running out like snow in the sun.

We could not hear the noise of the vehicles on the other side of the valley. It seemed as if life had stopped. No more people were on the way. We then put survival blankets on the floor and decided to sleep. The fire goes out. I was falling asleep when I began to hear a sort of roar, or rather a huge scream that echoed back to infinity on the mountainside.

Then we heard firecrackers, exploding everywhere. The echo did not help, and it quickly resembled the din of fireworks. The roar of the beast became more and more pronounced. This deep cry came closer. The more it went and the roars were at least a minute apart and obviously the beast was coming towards us.

I took out my ridiculous Swiss army knife and opened it and kept it in hand just in case. I smile now at the stupidity of the reaction. We did not even imagine what this feline could be and certainly fantasies of thwarted hunter made us imagine the worst. And if it was a tiger!

I scanned the surroundings and told myself that if the animal arrived, we could climb trees. But very quickly, I thought, a cat climbs trees much better than a man. Then we heard a roar nearby. A minute passed without the slightest sound, then the cat roared again but the sound was now from the right, then the next still to the right but already more distant.

We still heard scarecrows, at the village level that we had passed in the late afternoon, where we should have gone to sleep if we had listened to the villagers, there is still barely an hour back. The cries continued but were lesser to finally fade into the mountain so that we finally heard nothing. The fear had seized us.

We had never heard a roar and frankly still today or forever be imprinted on my memory. I laughed frankly when I evoked the desire to climb a tree, imagining the situation, perched in a tree with a blade surely evoking a toothpick for a tiger ready to devour me! The villagers had reasons, and we should have accepted their invitation. We fell asleep when we were certain that the silence would not be broken by the cry of the feline.