While the heat sets in Delhi, where the thermometer exceeds 40 degrees, we took advantage to go a little further north. The goal was to enjoy the days to go to a remote corner and that I could not do in a weekend. Reducing my initial ambition which required to take a flight and a lot of preparation, I decided to leave for Uttarakhand to Ranikhet in the heart of Corbett National Park.

This time, I left a little unplanned. The whole trip was fixed, but flexible enough to allow me to cash the possible hazards of a trip off the tourist trail. So I arrived in the night, after an hour in the Delhi metro to the Anand Vihar bus station where I boarded a bus to Ramnagar. Cradled in the front between bags and people, the little air that infiltrates can withstand a minimum of 8 hours of travel. Each stop of the vehicle is a nightmare.

The animals are truly wild unlike some other parks like Ranthambore, where I learned that tigers were regularly fed. The guide I had talked to on the day before on the phone had advised against coming saying that the visits had been sold and that I cannot access the park.

Fortunately for me, it turned out that I could go on a safari in the afternoon and that even more, I could even spend a night in the park. So I opted for this option which was frankly expensive but that seemed to me worth the cost/blow. 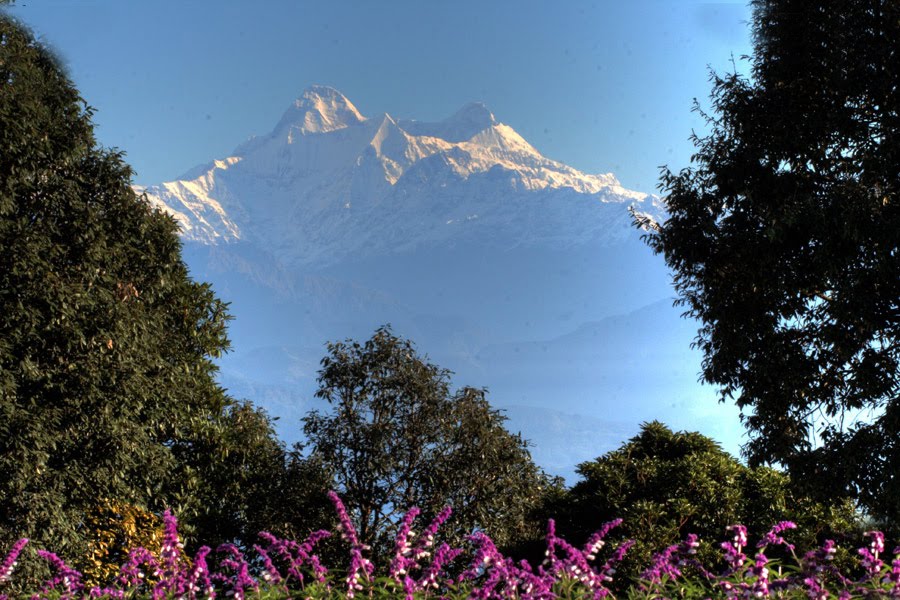 I left on late morning with the driver who was quite friendly. But it was a little frustrating to see him like everyone else during the two safaris where the only goal is to see the tiger. The 50 km separating Ramnagar from Dikhala was for me, the real attraction of the stay in the park. The driver drove gently on dirt tracks, on the lookout for animals.

This magnificent protected natural area alternating hills, sal forests, gullies, swampy areas and meadows is furrowed by the Ramganga river. This peaceful river, halted by the Kalagarh dam, gives rise to a lake bordered by large grassy plains in the center of the park. The alarms of deer and monkeys are regular to let us know that the Tiger is not very far, immersing us then in a very particular atmosphere.

Nevertheless, this discreet predator remains quite difficult to see. Maybe we will have the chance to observe him strolling nonchalantly in the undergrowth, in a grassy meadow or come to drink or bathe near a water point.

The driver seemed to want to give a good taste of the safari which, comparatively, were a little disappointing. I arrived at the camp at around 15:30 and planned to go on safari almost immediately. So I settled in my quite spartan dormitory before leaving.

The safari consisted of a tiger hunt. A dozen jeeps followed each other almost in line to the edge of the forest, at the limit with the grasslands where graze the animals. Once there, everyone turns off the engine and wait, until almost one hour out of the three hours of safari!

As we were impatient, our driver agreed to take us a little further, where we made a very nice observation of a group of wild elephants. A dozen adult females, three young, including a baby (a few weeks old) were grazing while regularly spraying themselves with dust.

It was very impressive, especially since they were really close. I shivered as they crossed the road. I also observed a male wild tusker with long tusk, moving isolated. When I returned to the hotel it was not even 5 o'clock, and I am not able to stay in the enclosure! Knowing that I would not find anything, I went for a walk in the town. Sure enough, there was nothing. Not even places to eat.

I listened to music and followed the trail. I arrived at a site and only saw many men and they only looked at me. One finally gave me the forward gesture and I went inside without really knowing where I was going. All the women were sitting on the floor. Finally someone managed to explain to me that it was an engagement ceremony but that the boy and the girl would not see each other until the wedding in the following week.

They made me dance and everyone was so embarrassed that only a very invasive girl danced with me with the consequent attention of adults. They formed a circle. The children took me aside, mage me sit in a chair. They brought me food. I was very happy to have shared that time with them. They gave me a tiny pendant of little beads.

A woman came to ask me if I was married and smiling I went back to the hotel. I spent some time in the garden. The truth is that it was an incredible time and it was nice to be outside. There I met a girl I had seen at another hotel during breakfast and we were chatting. We had the same safari the next day and we agreed to go together.

I went to sleep, but the sheets still do not convince me. I have slept in my bag and since there were many mosquitoes outside and once I saw in the room, I put the mosquito net. I had already been warned that there is usually no place to hang the mosquito net.

My plan for these cases was to put the suitcase horizontally behind the head to create a high space and join the mosquito net there so there was air between my face and this one. Then the rest of the body did not matter to me, since I have it covered with the sack. Instead I put the two pillows horizontally behind my head.

I sleep in the heart of the park in a camp protected by fences. I feel the beating heart of the jungle, with all the protagonists who act at night.

After the breakfast I load my bag to go towards the beautiful slopes and forests of the foothills of the Himalayan range. The safari was relatively similar, although we had waited less. I had little patience or hope to see a tiger among all these jeeps, even though silent. We watched at length the group of wild elephants, the same as the day before, as well as huge groups of chitales and many birds.

We went back to Ramnagar, taking advantage of the crossing of the park to make our last observations. We have the opportunity, in particular, to see a gharial in the Ganges from less than 100m.

The rest of the trip was to be more sporty. I planned to reach Almora to spend the last few days trekking in the green Himalayas. To save time, I jumped on a bus to Ranikhet (mid-course) right out of the park. In this mountainous region of Uttarakhand, the state of the roads is poor. After 4 hours on the 100 km, I swapped the local bus for a shared jeep bringing us to Almora after 2 hours to finish 50 km.

It's pretty folky, but overall rather fun, and practical if not comfortable. We wanted to settle here for the weekend. Almora is a small town, located 1650 meters above sea level in the Kumaon region, which is known for its stone temples dating from the 10th century. It is them that we went to see from Jageshwar, a big village housed in a valley and around which are beautiful walks.

Beautiful wildflower fields and rhododendrons, bordered by forests of pines and oaks, surround the city. In 1869, the British army bought a piece of land from the villagers of Ranikhet to create a mountain camp where soldiers could escape the summer heat of the plains.

Perched at 1820 m altitude, on a ridge in the foothills of the western Himalayas, Ranikhet offers an astonishing panorama, from the surrounding hills to the snowy peaks of the Himalayan range, less than 100 km north-east. The Nanda Devi, the second highest Indian peak at 7,816 m, is clearly visible.

As for the panoramic view of the peaks of the Himalayas, it will be necessary to return in winter, but it is certain that the region is very beautiful. I see colorful villages, terraced crops, pine forests, some banana trees and palm trees seem to be arrived there by chance.

The city now hosts the Kumaon regiment of the Indian army, whose presence accentuates the impression of tradition and heritage of the past. The charm of British colonial buildings is still noticeable. The houses stretch out on the ridge, on either side of the bazaar district, but, following Mall Road, it is possible to quickly find oneself in the middle of green spaces planted with trees and flowery meadows.

Unlike the larger resorts of Shimla or Dalhousie, Ranikhet remains pleasantly hidden. Its tranquility invites serenity. I reach the main attraction of Jageshwar, the complex of 124 stone temples, most of which are dedicated to Shiva. There are lingams in most of them of various sizes. The place is very popular as I witness the many stalls selling offerings and religious souvenirs.

From there I enter a path through the village and then the pines, leads to Vridh Jageshwar. Here I discover, at the top of the mountain, a new stone temple and some buildings. We were supposed to reach Binsar, another historical place, on foot by a path along the ridges, but we got lost and had to change our plans. Never mind, nature was beautiful, and despite the sun a bit strong in the middle of the day I took full advantage of it.

The return to Delhi was hectic. After sitting for 12 hours tossed on the benches of an ordinary bus, the journey was worth it! At night, Mori Gate looks like a film with a wasteland dimly lit, truck carcasses, starving stray dogs, and men with uncertain gait observing with unfeigned interest the westerners who seem lost.