Arjun voiced by Yudhveer Bakoliya combines hand-drawn and computer graphics. The plot unfolds rapidly and gives way to scenes of battle, sometimes quite bloody. The film was meant to be enjoyed by adults, and the emotional content is there.

Western critics held that Arjun The Warrior Prince was too old-school and the film could be considered a bit too outdated and traditional. Subtitles are been criticized for their vagueness, and the women who appear in the film do so only to get married or to take care of men.

Yuvraj gets excited like crazy, alone with his wooden sword against a cloth mannequin. However, night fell. It is time to sleep. The young prince is of course unable to fall asleep. His housekeeper tells him a story of a great warrior, that could help Yuvraj to sleep.

Long back, the King Pandu had abdicated the kingdom of Hastinapur in favor of his brother Dhritarashtra and had gone to live as a hermit in the forest. He had five sons collectively called the Pandavas. On the death of Pandu, the family moved back to the palace. Dhritarashtra had hundred children, called the Kauravas.

The five Pandavas were thus faced with their ​​the Kauravas, trained together in weapons by Drona. Arjun was the smartest, especially with the bow. Drona had high hopes in the young Pandava. But as time passes, rivalries and jealousies between Pandavas and Kauravas became more vivid. During an exercise, Duryodhan, the eldest of the Kauravas had even tried to drown Bheem, the youngest of the Pandavas.

The old king Dhritarashtra had understood that his own succession would be difficult and the war between the Kauravas and Pandavas appeared difficult to avoid. Duryodhana wanted the crown of Hastinapur at all costs, even if he needed to kill his cousin Arjun.

Arjun: The Warrior Prince tells a small part of the Mahabharata, simplified and romanticized. Perhaps to avoid countless digressions, many aspects are ignored. Thus, for example, the viewer may be surprised to discover, without explanation, that the king Dhritarashtra is blind and wonder about the fact that his wife Gandhari accompany blindfolded. Their age difference surprises.

The religious aspects, hidden at first, gradually illuminate understanding culminating in the initiation of Arjun. The film can happily be seen as an extraordinary and fascinating history. After 30 minutes, we get familiar with many characters. The fact remains that the gap with western references is immense. The war between the Pandavas and the Kauravas is not the Trojan War.

Arjun is neither Achilles or Aeneas, and is much more than that. The motivations of both the Pandavas as Kauravas are very human. We are therefore based on familiar ground. The epic is however another dimension when the gods are involved, with Krishna and Shiva first. Arjun becomes divine warrior. The housekeeper punctuates softly his story to the young Yuvraj by explanations that we are also intended.

We can therefore see fights and battles that punctuate the narrative. Arjun: The Warrior Prince is bloody, as if to illustrate the troubled times of this great fratricidal war. Young boys will certainly be thrilled, girls may be less. Basically, the only meaningful characters are male, while women are far behind.

Even Draupadi, the wife of Arjun is entitled only to a few words. The text of the Mahabharata is even more cruel to Draupadi. She is actually the wife of the five Pandavas and not only Arjun as shown in the film. On the contrary, the sets of Arjun: The Warrior Prince are often beautiful.The fights are addictive and well choreographed.

This technical success is accompanied by interesting digital effects. Camera movements are perfect, suggesting that part of the animation was done by computer. Some scenes were played by actors and then redrawn by hand. This method differs from the motion capture, and increases realism by enabling smooth natural motion. Finally, the evocation of the divine is remarkable, and is the opposite of what we see in most Indian mythological films.

The sound is no exception. The sound effects are impeccable and the voices are very nice, especially that of the housekeeper. The background music of Dhruv Ghanekar perfectly accompanies the action as in the final battle. Arjun: The Warrior Prince includes six songs from the Vishal-Shekhar duo. Animated films are usually for young audiences. This is also the case of Arjun: The Warrior Prince. 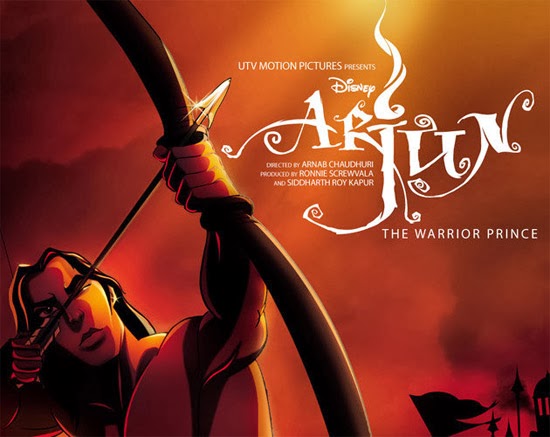