From Mysore we had to go down to Kerala, and transport options are also few. Our friends from Hampi told us about an alternative to the 15 hour bus from Mysore to Kochi that we found interesting. Our intention was to go to Fort Kochi to be there one day and then continue to Munnar. We took a taxi from Mysore to Bangalore and from Bangalore an internal flight to Kochi. We arrived at the Kochi airport and chaos began.

The airport is about 60 km from Ernakulam. So on arrival we took a taxi and asked the taxi driver to drop us off at the hotel. We arrived almost at night, quite lost and without any idea of ​​where we were going to stay. Walking down the street we were stopped by a guy who offered to rent us a room in his house and so there we went! 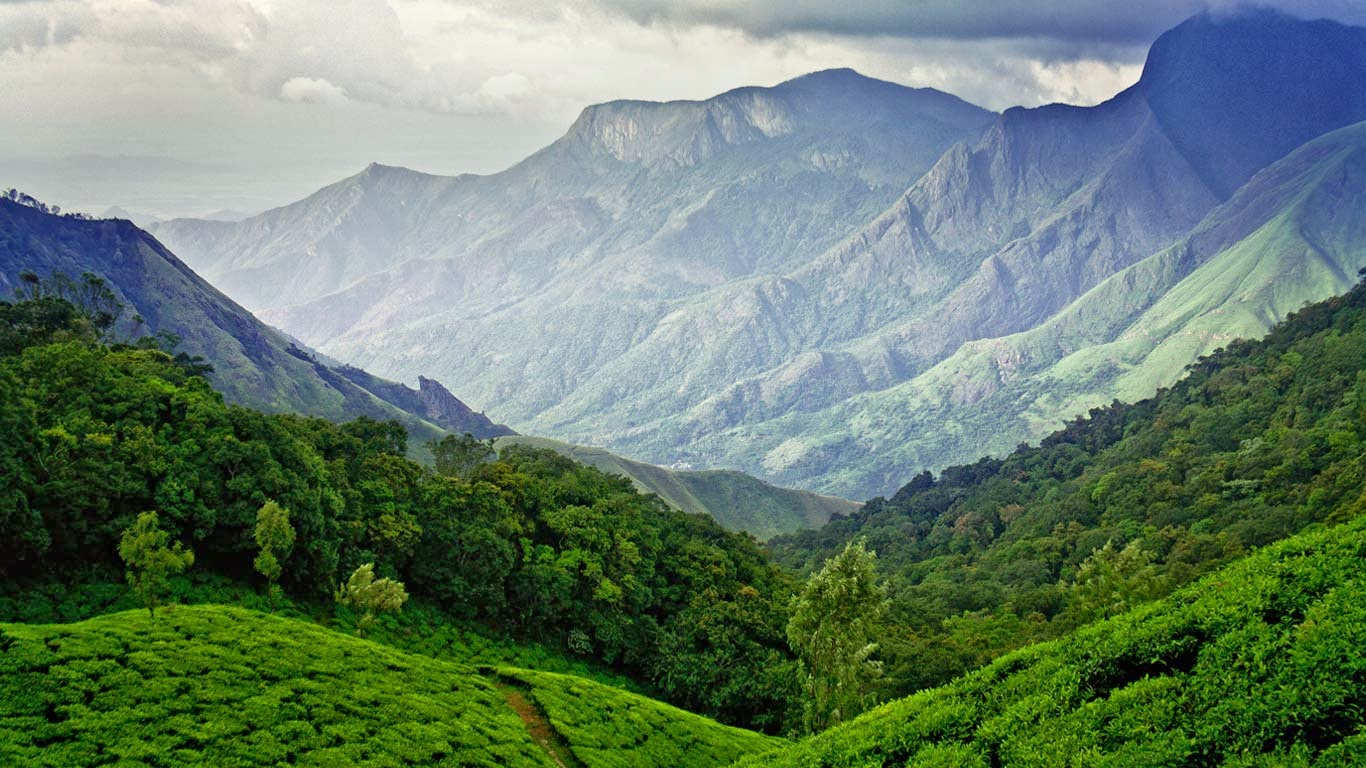 It's Good Friday. We had as plan to go direct to the hills of Munnar. Munnar is a very tourist hill station, an area of ​​beautiful mountains and plantations, as well as an interesting natural area. After breakfast we start the road by stretching out in the car with the sunrise to our right. We prefer to take advantage of the first hours taking pictures and walking in Fort Cochin and its beach.

At 11 we board the car and once again hit the road. It took us a long time to leave Cochin. When arriving in rural areas, luxurious houses appear in the middle of nowhere, which are mansions of emigrants in countries such as Dubai, Oman. The stores and shops are almost all closed and the shopping center of some towns seems spooky. I'm not used to seeing everything closed.

Sometimes we come across a procession, parading in a row on the edge of the road. Many carry crosses in black made with cardboard. We begin to climb the hills. The road is steep. The landscape is jungle, with huge granite stone mountains, in which the rivulets of the dry waterfalls seem painted. In the rainy season it should be spectacular.

There are several tea plantations and spices, as well as the already classic immigrant mansions. The landscape is of an intense green. Our first stop is near a river where we take a little dip and we help the caretakers of some elephants to give them their morning bath. We bathe a 40-year-old elephant who did everything his caretaker ordered.

Our driver took us along a little traveled road to see lakes and landscapes more rural than those seen on the general road that goes to Munnar. Following the path we stop at a couple of waterfalls, to have a very natural pineapple juice and to know where many of the country's spices come from. They showed us things in the farm of spices, cocoa, cinnamon, pepper, curry leaves.

We also had the opportunity to see a huge plantations of trees where the rubber is removed. The labours makes a cut in the bark which begins to secrete a white liquid that is collected in containers made of coconut. Then that liquid is put in molds where they heat and rubber comes out, with which all kinds of things are manufactured.

The road continues its way up to the little more than 1500 meters high that Munnar has. The landscape is totally of a tropical jungle, until we start to see the first tea plantations. After having seen so many photos, the landscape is still more surprising, as more and more hillsides full of plantations begin to appear on each curve.

It is a landscape very different from what the day was bringing us. It is around 3 pm when we arrive in Munnar. The area is full of tourists who have come from the plains or the coast to take advantage of these holidays. There is no where to eat because the sites that have not closed, are overcrowded. We entered some with a moderately good look, but the queues and the spicy smell, throw us back.

At the end we eat at a hotel restaurant. The food is pretty good for our taste. The driver wants to take us to Top Station to see the views, which we accept willingly. We see that it is 34 km only but what we did not know is that it will take 2 hours more up to that point. Anyway, the landscape is worthwhile.

We parked the car at 2300 meters, and walked between all those plantations to the Top Station. There is some fog that does not let us see what we really could have seen. We get to start again the way to some viewpoints in the hills like Echo Point and see Lake Mattupetty, in the dam of the same name. We went through several plantations and spice factories.

These sites usually offer a series of very similar activities like visit to spice plantations, elephant rides, rafting, jeep rides. There are some villages with colorful houses and above all, tea plantations, with that intense green that characterizes them. Arriving at Lake Mattupetty which is actually a reservoir the landscape becomes more forestry.

There are a lot of people everywhere and there is no corner where a car has not stopped and a family has gone down. Anyway, the mountains on the other side of the lake are pretty and there's a forest, dotted by some plantation. The lake is crossed by boats and boats loaded with weekend tourists depriving it of its natural charm. I guess it will not be the same on a normal day.

For my taste the area of ​​Munnar, does not have the charm of Periyar-Thekkady despite its impressive hills. Returning we stopped in several places to take pictures of the tea fields.

We arrived with the last lights to the hotel, which has no sign. So we passed 3 times through the door, without imagining that it was the hotel. It is a small hotel. The room does not convince me, because it is at street level. The manager of the hotel is a very nice man and cannot wait for us to be at ease. I ask about other rooms and the first one is like an apartment, with views, a round bed and sofas. It does not convince us.

We stand, while a boy show us the garden and, above all, a cabin that is about 200 meters below by a path of stones. The cabin is a luxurious with a huge bed and even kitchen. The place is ideal for a couple.

Given the time and how complicated everything is, we ask to prepare something for dinner. They make us an omelette after they had to go down to the town to get the eggs that took half an hour. We eat it, more for the effort that they have put, than for how tasty the food is. At least it does not sting much. We sleep, surrounded by tea plantations. 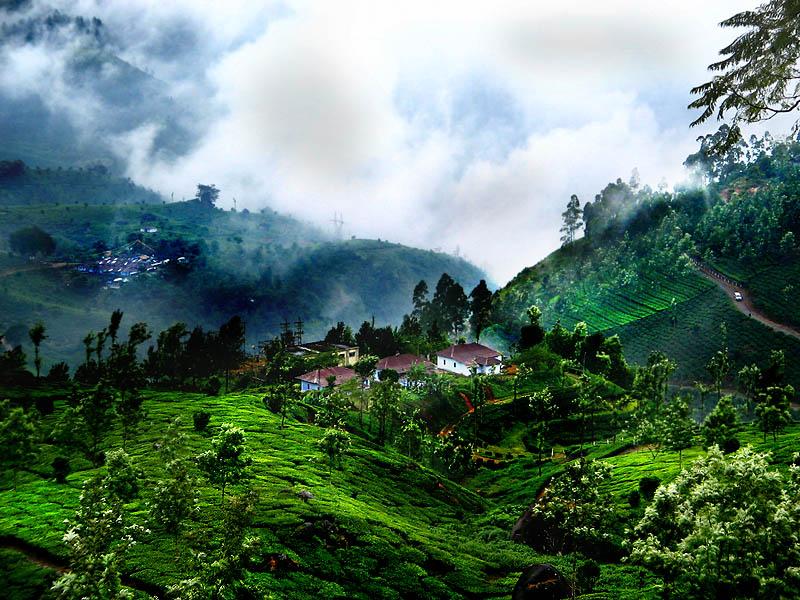 It's 6:00 and the clarity lets us see through the window that we are at a considerable height above the town of Munnar. Everything looks green on the plantations. There is only one more couple in the hotel. When we got up, I saw a plantation where grew various spices like nutmeg, pepper, mixed fruit, cotton trees, climbing trees and birds. The plantation is a Garden of Eden.

When we reached the top, a small, serious man with a mustache were waiting for us. He was the boss of the manager who had come to visit. At 7 o'clock we started the planned trekking, without breakfast. It does some cool in the morning. The sun begins to be seen in the distance and the slopes begin to cause the first sweats.

We get with our guide through the middle of the plantations. He shows us caves, the odd animal, but the most beautiful thing is the perfection of the tea plants for everything. It's like a green blanket that covers the whole mountain. The treeking lasts about 2 hours of ascent. We must be about 300 or 400 meters above Munnar.

The views are spectacular. The descent is somewhat faster, but between the shower and the expected breakfast we have done at 11:30 am, an hour later we go to see the tea museum and factory. The driver proposes to take a walk through the market of spices, fruits and tea from Munnar. He accompanies us and explains a lot of fruits and vegetables like jackfruit for example and many others that I do not remember. We buy red chilis, tea, pepper, cinnamon.

We ask the driver before going to the museum to take us to eat a thali in a local restaurant. At 2 o'clock we listen to the explanations of the transformation of the leaf of the tea in the different varieties. We went to see the machine that makes the process. There are machines for everything.

From there we went to see a 30 minute film explaining the transformation of the Munnar area from its beginnings until today. We now only had the farewell to Munnar with the women collecting the tea on the steep slopes of the hills. After the walk through the plantation we headed to Ooty.