Tiramisu is the dessert that almost everyone likes and after any binge there will always be a space for a teaspoon of tiramisu. It is the most loved, the most requested, the most dreamed. Its current name derives from the Venetian dialect and is now considered a typical dessert of this region. Yet other regions compete for its origins like Friuli Venezia Giulia, Piedmont and Tuscany. Yet there are many little-known curiosities behind this sweet so loved! We'll tell you some.

It was a fresh October evening in Taipei, the metropolis, and Taiwanese capital. We came out of a restaurant after dinner, specializing in hot pots. The unusually livable temperature (25 degrees at eight in the evening and humidity at 77%) is an invitation to walk. After the inevitable purchase of the usual bubble tea, we find ourselves in the night market of Liaoning, in the Zhongshan district that remains open until one o'clock.

There are food stands and digital gadgets. Occasionally we find items made by one of the Taiwanese aborigines' tribes. We see girls of Chinese ethnicity and platinum blonde hair and muscular guys with tattoos. Workers at the edge of the market collect what is thrown away and load it in huge bags attached to the handlebars of old bikes. Modern scooters covered with thousands of LED lights whiz through the nearby streets. Ordinary people go by and do their business on the Taipei 101, the high skyscraper at half a kilometer that was the highest in the world until a few years ago.

Among the food for sale, we find caramelized tomatoes and unexpected kebabs. There is the stinky tofu, whose smell can be felt from ten meters and makes immediately go in the opposite direction. And there's a vendor of Asian-looking tiramisu. In a mixed English, and Italian, he answers perhaps adding something in Chinese Mandarin. Within two minutes, continuing to walk in the market, I decide that the tiramisu made by an Italian must be tried absolutely. We buy three portions. 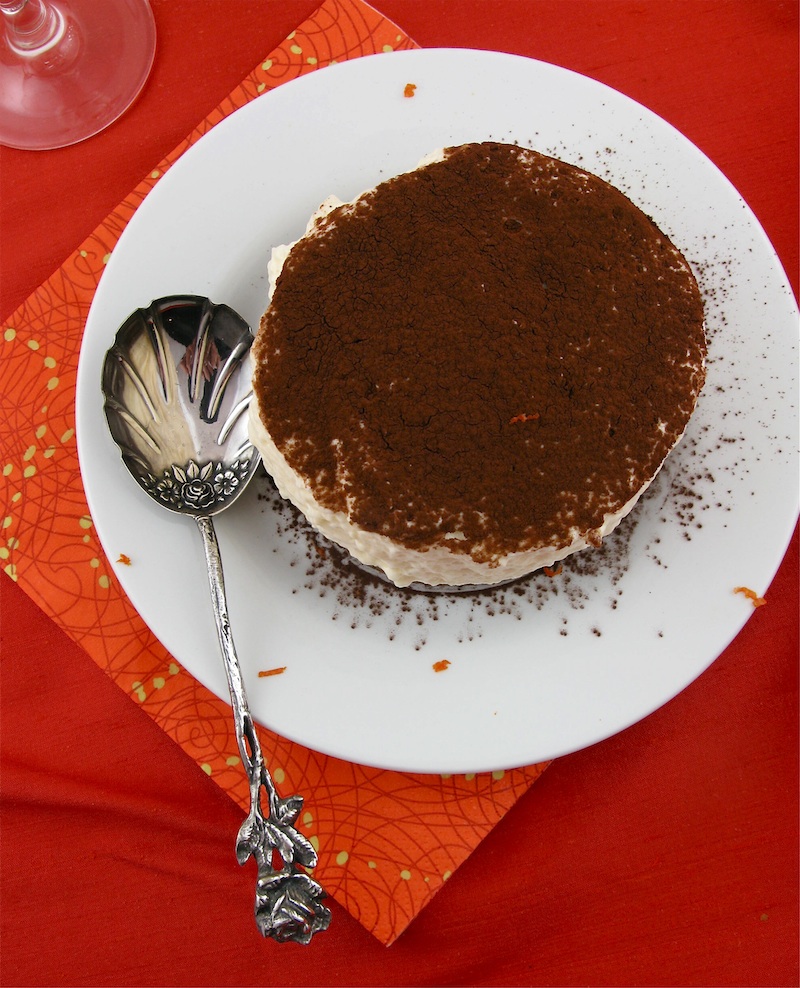 I tried the pistachio-free mini gluten-free one. It was my tastiest minutes of the week! Soft, delicate, the pistachio does not overwhelm the coffee and vice versa. Thanks to the convenient single portion I tasted my dessert, sitting on a bench in the shop. It is abundant, comfortable to hold and allows you to eat it while walking around the city.

I think back to what he does. I do not know if he has a hand-made tiramisu production company or the "factory" on an industrial scale, or he prepares a few portions as and when he can. I only know that it takes courage to start selling something in a night market thousands of miles from Italy.

It's easy to say tiramisu! Who does not know it? Who have you never tasted it? But who could say who was his inventor? There are several legends that revolve around the birth of the tiramisu, who maintains that it was conceived in Piedmont by a Turinese chef.

Even earlier in time, it is said that the tiramisu was created in Tuscany, around 1600. But the regions in winning the paternity of tiramisù are Friuli Venezia Giulia and Veneto. In fact, most attribute the paternity of the "tiramesù" to the city of Treviso. The success was so resounding that it gradually spread throughout the Veneto region.

But why is tiramisu just like that? There are many stories that circulate about the name of this dessert. The only certainty is that it is a word derived from the dialect of Veneto "tirame su" (then Italianized tiramisù). The current name tiramisu seems to date back to the custom of serving this sweet treat as a tribute to some closed houses in the region. Thanks in fact to that combination of energizing ingredients it has always been characterized as a dish with invigorating and aphrodisiac properties.

The tiramisu was good, by the way.

Tiramisu is an Italian dessert usually made from alternate layers of sponge cake and cream. The tiramisu is a modern and not traditional dessert. It originates in the eastern part of Northern Italy, in the region of Veneto, whose capital is Venice in the fifties. Some sources specify that in the brothels of the region are the exact location of its creation.

Between the seventies, eighties and nineties, the recipe used in the restaurants in Italy used five ingredients of eggs and sugar shakes, ladyfinger cupcakes dipped in espresso and cocoa powder. There is no single recipe for making it, but variants based on a series of base ingredients that can be represented by different products.

It is made with coffee and some liquor. A tiramisu is always made up of a solid ingredients dampened in coffee, on which is superposed alternatively or not a cream whose base is eggs beaten with sugar and is dusted with cocoa powder.

Starting from these basic elements, it is possible to make different versions of the dessert using different representatives of the same and adding other ingredients. The solid and dry ingredient can be crackers, biscuits, Ladyfinger, etc. The eggs can be separated into yolks and whites. Today it is very common to add cream or fresh cheese to the eggs.

The cheese that is usually used in tiramisu is the Mascarpone because of its sweetness and consistency. However, any fresh cheese which, once beaten, can be converted into a cream can also be used. To the coffee, you can add rum or Amaretto rum some other type of liquor to aromatize it and to reinforce the flavor. Finally, it is usual to sprinkle the dessert with cocoa powder to provoke a sensation of contrast with the sweet and to reinforce the aftertaste of coffee.

Separate egg yolks and whites. In a bowl, beat egg yolks and sugar until thick and creamy white for 5 minutes. Add cheese and beat until smooth.

In a second bowl, beat eggs whites until fluffy and fold in the egg whites into cheese mixture. Add a tsp coffee and mix until thoroughly combined.

In another bowl, add remaining coffee and wine. Dip each cookie for 5 seconds, soaking both sides and the strawberries and use them to line a baking dish.

Spread evenly half of the cheese mixture into the dish. Arrange another layer of soaked cookies and strawberries and pour in the remaining half of cheese and smoothen the surface.

Cover tiramisu with plastic wrap and refrigerate for 2 hours. Sprinkle generously with cocoa powder, before serving.