Indian cuisine has earned the deserved reputation of spicy. However, a few days of travel will show you that the range of flavors served at Indian tables is far from being able to describe with a word. The sweets, based on syrup and dairy, are as exciting as they are intense, and although they are not used to serving as a dessert in restaurants, they are the perfect culmination to cleanse the palate of memories of chile.

The Kheer is one of the most popular desserts in India. From the northern peaks of the Himalayas to the coastal regions along the Indian Ocean, everyone enjoys it. The importance of this great Indian pudding is based on the fact that it is appetizing for the palate of different cultures. There is more than one way to prepare Kheer dessert. Cultures throughout India and even worldwide prepare the Kheer according to their respective tastes. The variety is surprising. The Kheer is not only prepared in the traditional way of northern India.

There are cultures that prepare apple and banana Kheer even with a slightly bitter version of the pumpkin (in the city of Hyderabad, a version known as Gil-e-Firdaus). The varieties of Indian dessert do not stop only in India. Neighboring China also has its own version, where the preparation includes fruits and honey and are distributed in layers. Rice with a layer of gelatin is added to this version. 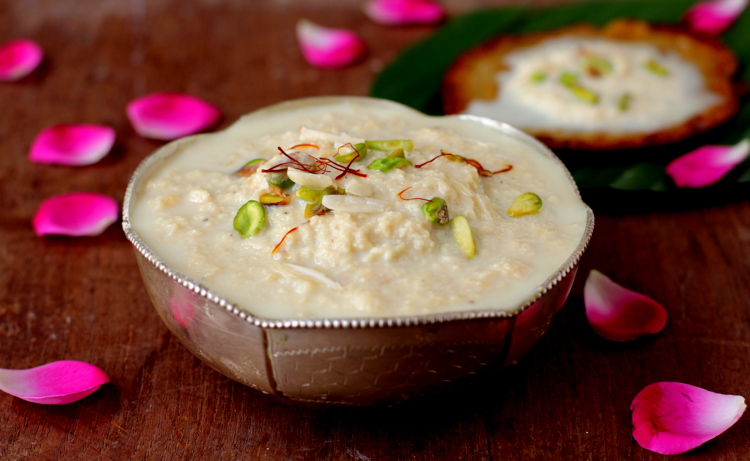 Surprisingly the Kheer has a non-vegetarian variant. In fact some say that initially the Kheer was a meat dish but evolved through the centuries as we know it today. The origin of Kheer remains largely unknown. Although mentions are found in a lot of ancient books of Ayurveda (it is also used for medicinal purposes especially as a coolant and for detoxification) and in the ancient Hindi poem in Padmavat, its origin remains debatable.

Popular opinion however falls in favor of the Indian subcontinent because the word Kheer is derived from a Sanskrit word Ksheera which means milk. The Kheer has a very deep religious association in India. It is to date used as an offering in most Bids and Hawans. The invocation to the gods is considered incomplete without him. In spiritual Dhams like Jagannath Puri, Orissa the Prasad is known as the Kheer Prasad.

In the deep south of India, it is known as Payasam and is diluted more than its counterpart in North India. In the famous temple of Ambalapuzha, payasam serves as prasadam to all devotees. In contemporary times, we also have what is known as Kheer Pasta, Kheer Oats, and even Cucumber Kheer. This is indicative of the evolutionary stages that the great Indian pudding has to go through.

We share with you a Komolar Kheer recipe, for a Diwali full of Indian style sweetness. The Kheer Komola is a traditional Indian easy to digest dessert similar to the English rice pudding. If, however, the rice pudding evokes extreme cloying and lounges where dusty chintz reigns supreme, the kheer is delicate and fragrant also suitable for closing a fancy dinner maybe decorated with edible gold leaf that works great as a comfort food for rainy evening.

Kheer is a traditional Indian sweet cooked with rice or vermicelli, milk, sugar and flavored with cardamom, raisins, saffron, pistachios or almonds. The kheer is a traditional Indian dessert similar to the popular English rice pudding of Victorian memory. If, however, the rice pudding evokes cloying and salons where chintz dusty reigns supreme, the kheer is delicate and fragrant also suitable for closing a fancy dinner maybe decorated with edible gold leaf, not as free-range used by me.

Kheer, the most typical delicious dessert of India of which I have already mentioned several times, is that dessert that brings with it the feeling of India. The preparation of kheer, along with its lightness and goodness make it a sweet repeat ad infinitum, because you can eat without fear.

Peel the skin of oranges and remove the thin transparent coating from each orange segment and shred it.

In a deep thick pan, add the milk and seviyan and bring it to a boil. Reduce the heat to medium and start stirring. Add the condensed milk and stir and reduce to half the original quantity.

Thicken the milk till it changes it’s colour to a nice cream colour, stirring in between to prevent the milk from sticking to the bottom of the vessel. Add the shredded orange, sugar, cardamom powder and saffron powder, lower the flame and cook for 15 minutes.

Cool to room temperature and chill in fridge for 4 hours and serve chilled topped with nuts and vanilla essence.