Maybe you've heard about Shangri-La once. This mythological city of unknown location, famed for the spirituality and teachings imparted by its inhabitants, has been of recurring use in the artistic, literary and audiovisual imaginary of the past century. There are many areas where this city has been planted, almost always linked to the Himalayas. I do not remember where I read a long time ago that the Mechuka valley was one of them.

After spending a few days living in a Buddhist monastery, I decided to travel there to see first hand what I found. I traveled from Itanagar to Along in positions worthy of a yoga instructor, avoiding with hands to hit the roof of the vehicle in every rut of the stony track.

Once in Along, I climbed another vehicle that left shortly after dawn to Mechuka. A glance at the map may not reveal how hard it is to enter this valley. The line representing the road will be unable to guess that kind of road. It is, of course, unpaved, that timidly makes its way through leafy jungles, valleys, and sometimes to waterfalls.

More frequented by monkeys and other animals than by vehicles, the route was nonexistent just twenty years ago, leaving the inhabitants of the area in a peculiar isolation. I got cold ice cream and no sleep despite not having slept. I booked a room in the only hostel and have a Tibetan soup in a neighboring family restaurant. Supplementing the full moon with the light of the lacking street lamps, I walked for a while before falling exhausted under the blanket. 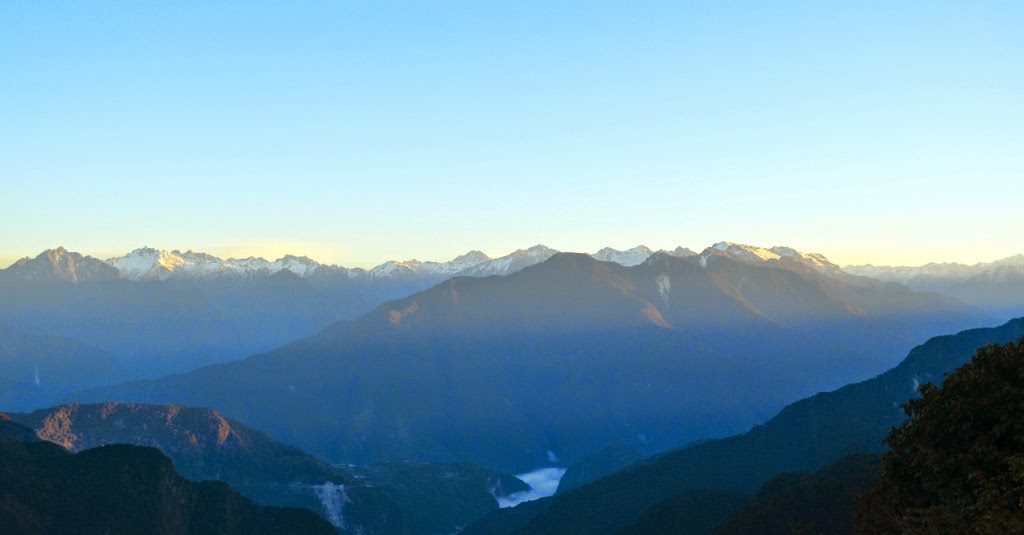 I opened my eyes with the first rays, but Mechuka was already awake. Where electricity is scarce, people live with the sun. The frost covered the skirts of the valley that shelters this town. The frozen plants confirmed my motives for having shivered all night. Wanting to find some remnant of the mythical past of the valley, I made myself understand how I could until the natives directed me towards the old monastery.

The indications were clear. I had to walk to the North. And I did that. As soon as I separated a few kilometers from the town, I was impressed by the tones of the landscape and its light. Already on arrival the previous day I had noticed a different light in that valley, an illumination that I had not seen anywhere else in the world.

I attribute that to the height, reflection of the nearby peaks or some optical effect. The mountains that border the horizon served as a natural border with Tibet. On a hill that rose in the middle of the valley, I saw the monastery that I was looking for.

I found it difficult to find a path between the flooded plantations, and I had to go back several times. I reached the top of the hill panting, sweaty and with my shoes soaked to find a shocking surprise. The wood with which the building was built confirmed its relative youth, and its architecture more resembled an American ranch than a Tibetan monastery.

Everything I had imagined about the place was far from what he saw. If that was not enough, the door was closed. With a couple of voices, I only managed to frighten the four hens that stung seeds in front of an adjacent house. Finally, a sleepy boy came out of it. He lived in a nearby town, and in a kind of community work that week it was his job to take care of the place.

With a lot of predisposition, not only opened the doors of the monastery but for more than half an hour I saw each of the figures inside. They indeed corresponded to the original building. An exquisite collection of masks depicting demons and other mythological beings, various artifacts for rituals and ceremonies, tunics or sophisticated mandalas hung on the walls attesting to a somewhat more active past of the place.

A human figure with presumptuous divine features rested on a three-legged chair. The nearest ray of light illuminated it tenuously, revealing the dust in suspension, the scant cleanliness of the place. To my question about who it was, came a stunning gesture. It's Guru Rinpoche!

I have not recognized the founder of the Buddhist order Nyingma, who preached the benefits of this religion throughout the Tibetan territory. This monk who receives almost as much devotion as the Buddha himself found seven unique places in the world. They are characterized by his predisposition for personal development, happiness and the establishment of Buddhist communities far from the world. Listening to those words, the idea of Shangri-La reappeared in my head.

From the monastery, still fascinated by the views, I continued on my way to another place that attracted me to the region. It is the cave in which Guru Nanak retired to meditate, the established one of the Sikh religion. The last section before the cave crossed a militarized zone. The soldiers guarding its entrance are so surprised and happy to see that I walked to the sacred place, they did not hesitate to let me pass.

At one point, among the conifers that stretched on both sides of the track, I spotted two dwarf deer, native to the Himalayas. Next, to a river, I found a wooden sign indicating the proximity of the cave. I find a brief indication considering the warmth of the gurdwaras scattered throughout India.

A humble hut with some photographs on the wall gave way to a staircase as sloppy as sloping, full of mold that inevitably slipped down. I do not know how much or what internal achievements Guru Nanak would achieve, but I admire his ascetical ability to have spent years as a hermit in that environment. The cave in question has the width of a body tilted, preventing another position that was not upright.

The humidity is constant and the temperatures drop to zero for several months a year. Later I would find out that there were several years that he dedicated there to the ascetic life. With still some sixteen kilometers to reach Mechuka, I started the round. I walked lightly when passing again next to the military barracks whose presence, evidently, was not accidental.

The neighboring border with Tibet, known as the McMahon line, is constantly watched for fear of the expansionist ambition of the Chinese government that already pierced it in 1962. Upon seeing me, soldiers greeted me. At that moment my face must have spoken for me. Absorbed by the impressions, I had not eaten a bite all day and hunger came suddenly.

The food with which they entertained me encouraged me to stay with them for some more time. When the dessert arrived, I was already surrounded by a good court of generals and other high officials.

When I arrived in Mechuka, I finished the beating of my legs by going up to the only Buddhist temple in the city. Luck, destiny or mere serendipity, in it I found the key person of my visit to the valley. I just closed the door of the temple when I approached and introduced myself by shaking his hand. He agreed to my request to visit the place for a couple of minutes warning me in advance that there was nothing special there.

After being interested, with a casual smile, for the reasons of my trip we ended up in a long conversation that culminated with a dinner at home. It complemented the explanations of how their ancestors came to Mechuka from Sikkim or stories about the war invasion of the valley in the sixties with old faded photographs or historical documents.

Those drawers, more typical of a museum than of a private individual, showed the love of my new friend for the history and traditions of his land. The best, I still ignored it, was to come. It is an invitation to travel with him by car to show me interesting places. Sketching a mental list of the many doubts that appeared to me, I fell asleep that night. 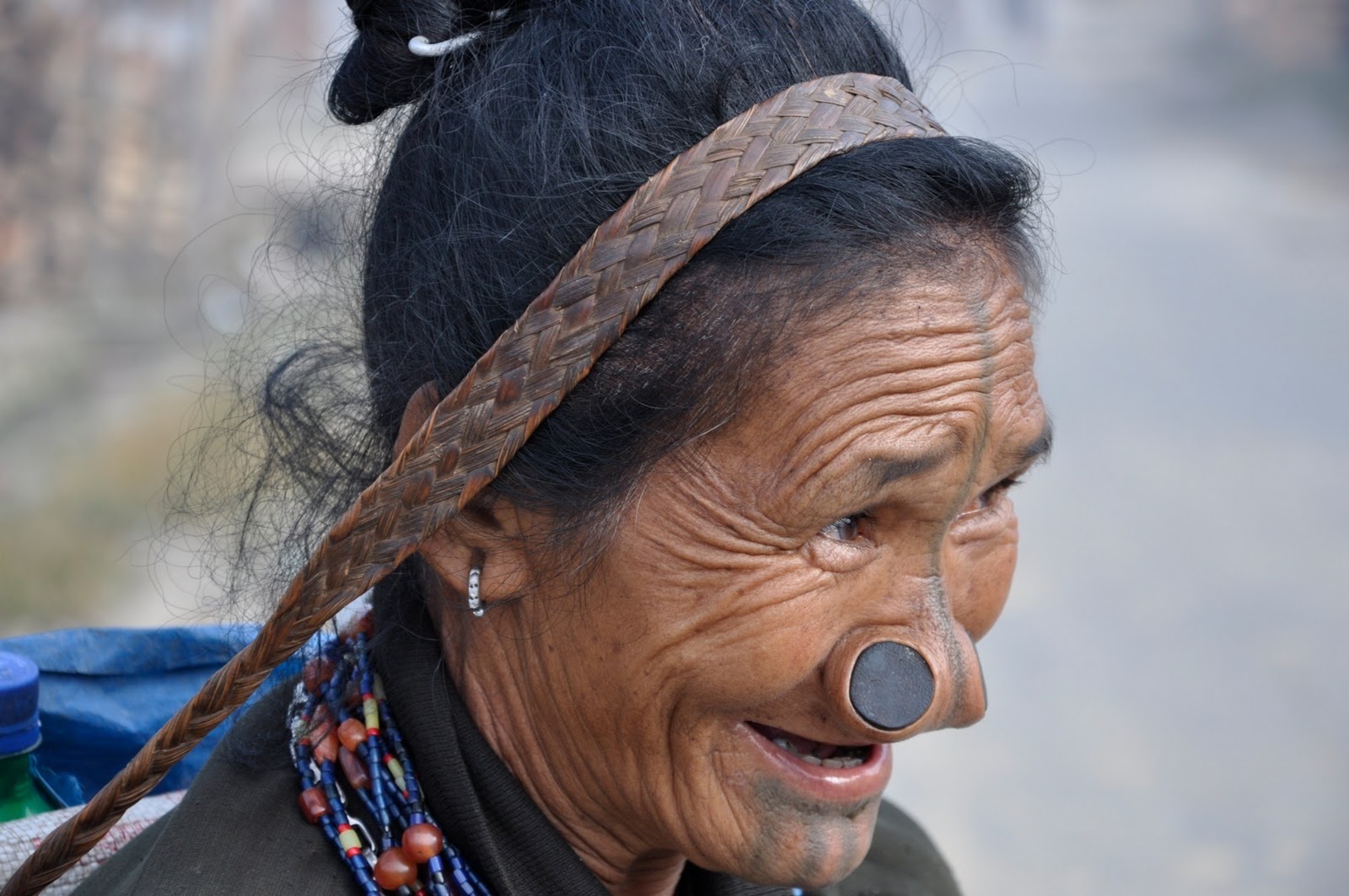 Punctual to the appointment, the particular tour began almost at the door of his house. Some Buddhist flags and some inscription recalled the place where Guru Rinpoche had marked the beginning of the valley twelve centuries ago. With the armed conflict of 1962, that promised land automatically lost its status. It did not matter to its inhabitants the destruction of the site.

In Mechuka the yartsa gunbu abounds, a powerful aphrodisiac that is sold in some countries for a whopping sum, and that was already known centuries ago. So well known is the healing ability of some plants in the valley that Mechuka in Tibetan literally means healing waters everywhere.

Where those flags are today, Guru Rinpoche marked the beginning of Shangri-La centuries ago. Historically, the natives of Mechuka were known as barbarians. The atmosphere of the place changed radically with the massive flight in the seventeenth century of many Tibetans. I had found out that the public vehicles leaving the valley were full for several days.

The local people, upon seeing me, warned me that with the lack of traffic it was very unlikely that anyone would pick me up. An hour passed, not the cold when beginning to believe they passed in front of my three SUVs in a row. None even slowed down. The last one stopped in a house to buy food, and I ran to play one last letter.

In the car was the engineer of Along in charge of Menchuka's technical emergencies. He asks me to sit in his car that made me accept immediately. In the car, there was no shortage of beers, and the experienced driver was driving fast. Before arriving at Along, he had already invited me several times to spend a few days at his house.

The wild roosts that he had hunted gave us a dinner based on grilled vegetables (in the most literal sense of the term) that were dipped in a thick sauce based on entrails of fish and the same chicks. Vegetables that I had never seen served to accompany the rice and pieces of smoked pork during the day by the same fire that blackened the whole kitchen (which also serves as a living room and sometimes as a bedroom).

A bone, spine, and sometimes the skull of the animals that were eaten are stored and piled on top of the fire itself, resulting in over the years a curious collection. He tells me that in Arunachal Pradesh the Donyi-Polo religion, that worship the Sun and Moon, continues to be practiced inspired by the animist tradition of the area. 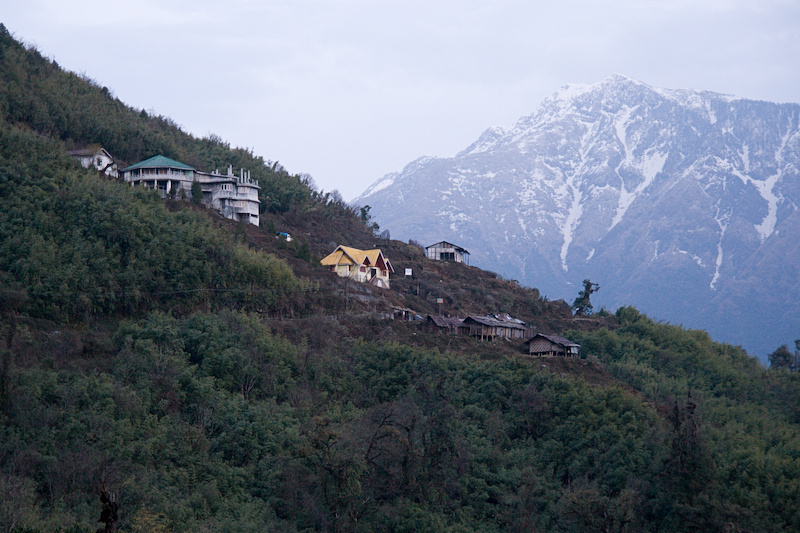 On the third day, I left Along, to continue touring Arunachal Pradesh, probably the most unknown state in India. I had not found Shangri-La, nor got answers many of the questions with which I arrived in the valley. Maybe, I thought, Shangri-La does not really exist, or maybe I have a long way to go. Maybe continuing to travel would help me to mature, to continue asking questions, to answer them with new ones, to keep looking. In the meantime, I continue enjoying those little Shangri-La that the road sometimes provides.