Today I will talk about Manipur, one of the states of northeastern India and bordering Myanmar, formerly Burma. It is one of the least visited places in the country but it is not without attractions. It is possible to travel in Manipur independently and without having to obtain a permit. I was there last December and I took the opportunity to visit the beautiful Loktak Lake.

The road was a succession of bends through hills and forests, never flat, yet 15 km from our arrival point a totally flat valley opens before our eyes. After another strenuous bus ride in an old bus along bad roads and a bus driver in a hurry we arrive in the morning in Imphal. The capital of the state of Manipur is our destination for only one reason. We want to go to Myanmar.

As I reach the plains of Imphal I see protests by the ILP (Inner Line Permit) groups occupy the streets. We have to find a place to stay. On the outskirts of Imphal, a couple invites me to spend the night at their house and they inform me about the situation of the protests. I get news that the road to Kohima in Nagaland is cut off because of a heavy landslide that left the road cut off.

We reach a tourist office! They give me a brand new brochure on Manipur. I show two places with the finger, and they give us directions to take. The two designated places were Loktak Lake and the city of Ukhrul further north. It is only the photos that decided our choice.

Walking in Manipur reminds us in some ways of the Tripura, and by others, the Mizoram. There is a kind of mixture that works pretty well. The city center is Ima Keithel or Khwairamband Bazaar or more commonly known as the women's market. There are no men on the horizon.

The market is divided into two parts. There is a normal market where fruit, vegetables and everything else is sold and then a covered area where one can buy textiles. We have already seen the patterns and embroidery on the cloths throughout the Northeast. It quickly becomes clear that this part of India hardly sees tourists.

Our attempt to find out if the pineapple is sweet end with a pictorial explanation of how best to cut them. We feel like the real attraction of the market between all the older ladies who give us their best toothless smile.

We go for a walk to Loktak Lake, one of the largest freshwater lakes in Northeast India. I negotiate a boat trip with some of the fishermen who live on its shores in order to navigate calmly among its islands of vegetation. With a long pole the fisherman patiently directs the boat.

The special thing is actually the small floating islands on it, the so-called Phumdis. A mixture of plants, soil and organic materials move as a solid mass on the lake. Some islands are so large that even houses were built on it or small gardens arise. The waters are very calm and look like a mirror where the clouds are reflected.

We stop before some small huts that serve as shelter for fishermen. We ate fish in the fishermen's courtyard who accompanied us.

Nearby is the Keibul Lamjao National Park where with a little luck, I did not have it, you can see some Sangai. It is an endemic antelope that is in danger of extinction and of which only about 200 specimens remain in freedom. In Manipur it is considered as a sacred animal. We climbed on a hill inflamed by the magnificent Gulmohar trees amidst the celestial chanting of a temple.

On the way back from here to Imphal, we go in a car because the owner saw us and was curious about what brings us here. So we also learn why so much military can be seen here. In addition, we are close to the border area and also wants to be guarded. On the way we see the Kangla Fort.

Traveling by land from one country to another is very exciting. It's really unbelievable how an artificially drawn border can make so much difference. Back at Imphal we go to the only restaurant worthy of the name, and surprise on the menu we have tandoori chicken and naan! It is quite rare in this part of India. So here it's really a big surprise! The price to quality ratio was largely up to our expectations. 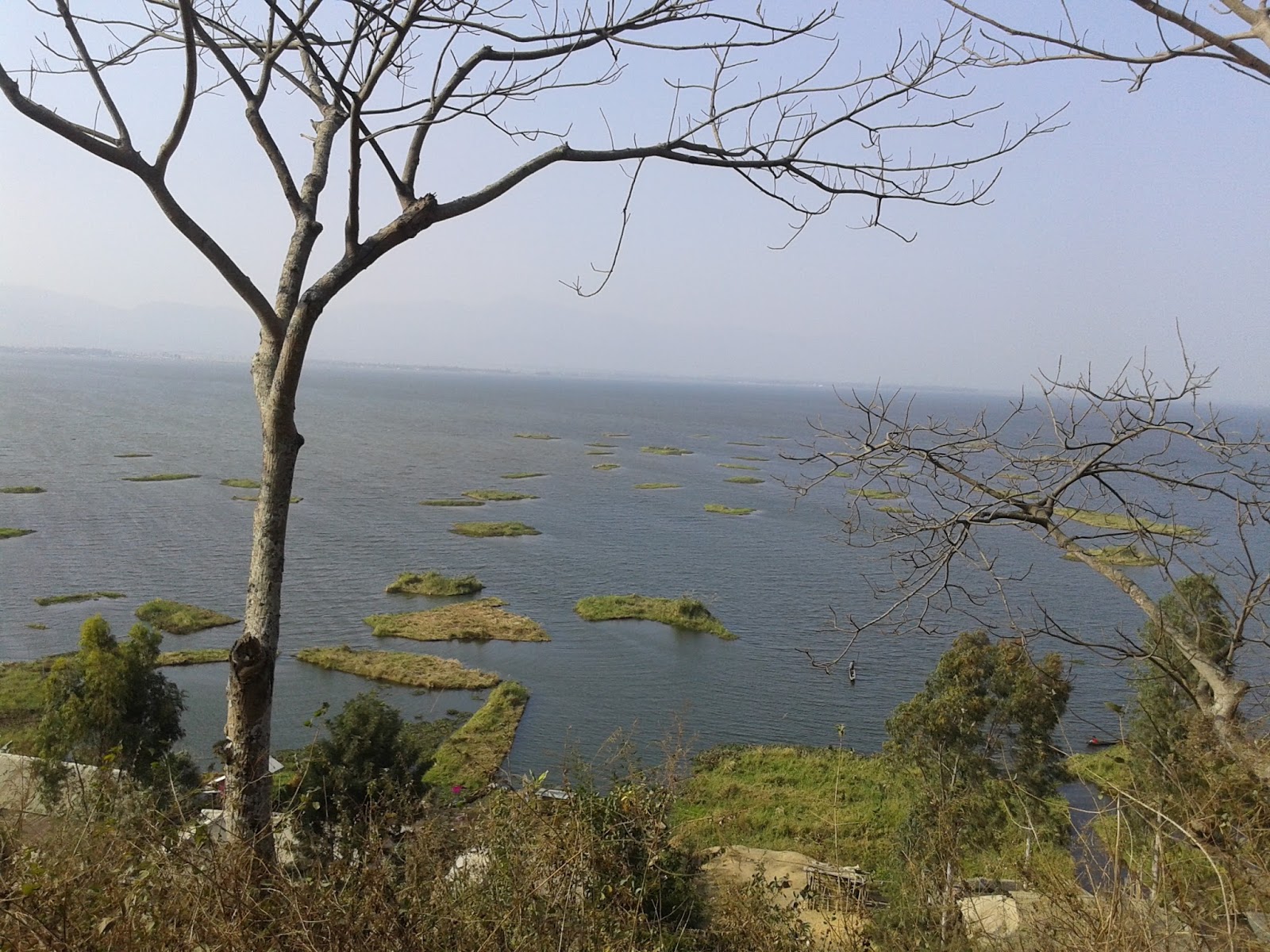 From Imphal, we head to Moreh early in the morning, where we plan to cross Myanmar's border. Myanmar could only be reached by plane and then possibly via Thailand by land and also from India but traveling through Manipur was not that easy.

From Imphal to Moreh it is about 80km, which we cover in a van with three other passengers. We pass not only a few mountains but not less than 5 border controls. The mountains of Manipur, green and leafy, give shelter to guerrillas, drug trafficking, clandestine logging and timber smuggling. The area remains under the control of the paramilitaries, the Assam Rifles.

The heavy rains of the previous weeks left some sections damaged with heavy landslides, and it has to push through the mud. The friendly locals host me or invite me to a tea or puri when I stop to rest. We have a fortuitous encounter in a curve with an Englishman of Indian origin who arrives walking from England. He started walking three years ago and after crossing Afghanistan and Pakistan he arrived in India. Now he is on the way to Burma.

Moreh is a small border town with great commercial activity. As it was the Independence Day, many businesses are closed. The mix of cultures and ethnic groups jumps out. Kukis, also known as Chin in Burma, Tamil, Nepali, Manipuri Meiteis, Mizos, Punjabi and Burmese give color to this small city.

In Moreh, of course, we are let out at the wrong gate and have to travel with their luggage for another 1.5 km through the sweltering heat for the next check. Here, as in the past, our names were handwritten in a register and we go on to the final check in India. The luggage is scanned again. We get our exit stamp and continue to the border. Only a small bridge separates us from our adventure Myanmar.

The bridge however is closed as there is some tensions on the other side. We decide to change track and go in a sumo to Ukhrul, further north in Manipur. But no, there is a bus! I know it sounds ridiculous, but we were so happy to change for a bus, an ultimate comfort. All along we were treated to pop songs, with the passengers singing all along. We do not know what to expect on the spot.

Finally we see yes houses, and streets, but no one on the horizon. There are no hotels, or restaurants. The driver stops in front of what seems to be a guest-house. I was going to say goodbye to him, but he goes down with us as he wants to be sure that there is someone at the reception. The room is very clean.

Night falls, and we are hungry! The only restaurant in the area is hidden at the bottom of a cellar. We cross a living room to arrive in this dark kitchen, and get a unique menu.

In the early morning we had only one desire is to redo the road in the opposite direction. When we arrived in the city we passed in front of a interesting looking house that must be 3 or 4 kilometers from the center. We go for a walk. It was a traditional house. In fact we learn that there are more than 3 in the vicinity. We were surrounded by children. A man comes around and takes inside his house.

We see buffalo heads and human skulls. Yes, they were headhunters before. One must kill at least 3 buffalos in order to build a house like this. It's too expensive today, and no one continues the tradition. On the brochure that the tourist office gave us we see they are people from the Tangkul tribe. They were all dressed the same way.

So we continue the conversation. They inquire if we had taken breakfast? It made me happy. To thank them we went to buy some meat for the family.

We take a tour of the city. At the town hall we admire some remains of headhunters. In the evening, we return to the famous restaurant. This time we meet a Buddhist lady. She tells us that she comes from a tribe who believed in worship of Sun and Moon!

She also serves us dinner. Tomorrow we will leave in sumo towards Nagaland.