The eggs have been a staple food for humans since prehistoric times. The most common egg eaten today, the chicken egg is believed to have come from wild birds that our ancestors in Southeast Asia and India domesticated before 7500 BC. Ancient Egyptian hieroglyphics depict servants carrying ostrich eggs as offerings. From times of the ancient Romans egg dishes were very common for meals.

Eggs have been a ubiquitous dish in the history of mankind for many reasons. On the one hand, they are nutritious. Eggs contain one of the highest values ​​as dietary protein, which help humans develop new cells and maintain healthy tissues. An egg has only 75 calories, but contains 7 grams of protein, so it is one of the richest sources of this essential nutrient.

Another reason is that the eggs act as a binder and thickening suitable for a variety of foods. Ancient people got a little egg on ground and wheat breads and pastries were born.

Finally, eggs helped as a sustainable agricultural practice food for people who had very little nutritious food available. Think about this: if people kill a chicken and eat, it only last one day. If chickens are kept and eggs are eaten, people have food indefinitely. The ancient Romans valued eggs. They even came to believe that the eggshells had magical properties.

Lately, eggs have lost some of their magic especially in Western cultures but are, mostly, one of the basic ingredients for breakfast. Around the world, people do fascinating things with eggs from careful fermentation for rare delicacies then fried to offer as snacks on the street.

If you are one who only eat the same way every day, here I share some different ideas to change the way you consume. 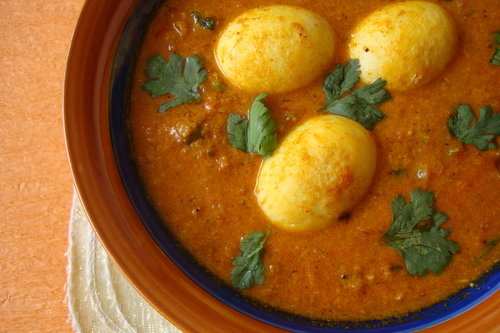 The signature dish in Argentina is called Matambre and consists of a finely sliced flank steak stuffed with boiled eggs, vegetables and herbs which features grilled or baked in the oven. It is cut into sliced and served hot or cold. His name says it all, so only accompanied with green salad and a main dish.

Century egg, also known as Pray, is an egg with weeks or even a couple of months old. It is made by preserving duck eggs, chicken or quail egg clay, ash, salt, lime and rice husks that are left there for several weeks or months. The tone of the yolk changes color as time passes being in a green tone and gray in the end.

The Doro Wat is a slow cooking stew with chicken carrying boiled eggs and eaten whole picking stew with injera which are a kind of flat pancakes made with millet.

Egg Curry. To make this delicious dish, to a stew with onions, tomatoes and green curry is then added boiled eggs with a small indentation on the sides. The eggs are left in the curry sauce for 10 minutes to absorb flavor.

Onsen tamago. This Japanese delicacy is prepared by slowly cooking an egg at low temperature in spring water until the yolk becomes creamy. Once the shell is removed, the egg is served in a small cup of broth and soy sauce.

The Huevos Rancheros are a classic of Mexican cuisine. Two fried eggs, fried tortilla with spicy red sauce on top is accompanied by rich refried beans. Super delicious way to start the day.

Balut. This dish is not for the faint of heart. Conventionally sold as street food in the Philippines, balut (or balot) is a developing duck embryo live boiled and eaten directly from the shell. Sometimes people cook with a kind of marinade with vinegar, soy sauce and bay leaves or cooked in pies.

Brik. This samosa food wraps a whole egg in a triangle of pastry with onion, tuna, harissa and parsley. Then all this is fried and is sometimes decorated with capers and cheese.

The Scotch eggs, thought to actually originate in London, are boiled eggs wrapped in sausage and then a mass and then after frying.

Egg curry in India is known as Anda Curry that is a very simple recipe and is very popular with children. Perfect for lovers of hardboiled eggs, the spicy curry enhances the flavor. In this dish, the hard-boiled eggs are stir fried and then added to a sauce. It is served over steamed rice in India. Eggs can be added to any type of sauce you like. In this instructable I have shown how to make it with peas and tomato sauce.

This week I propose a curry eggs, a dish I wanted to replicate for some time after I had tasted the homemade version prepared by a friend. When I announced that dinner was planned with a curry of eggs it unexpectedly cause generalized reactions of astonishment. And so I realized that it has taken for granted that everyone to know that there are several varieties of curry, not only as regards the main ingredient, but also for the combination of spices and flavor to be obtained. So I decided to make a brief discussion on the curry to have some clarity on the subject.

The eggs are boiled and are flavored and then placed in a creamy sauce made of cream and yoghurt. The fried onion and tomato is not used as basis for this curry, because the authentic egg curry should be sweet and sour. In this regard it should be noted that some restaurants to save time using a paste of boiled onions which gives a strong onion flavor to the finished dish, arousing the horror of the patrons, which is heavy and unbalanced.

Given the number of spices, herbs and existing flavors it is not hard to imagine how many different types of curry exist considering the possible combinations. There are in fact mostly spicy curry, others with a harsh note of tamarind for example, or rather sweet curry.

Remove the shell of boiled eggs and keep aside.

Make a paste of onion, garlic, ginger, cashew nuts and green chilies in a mixer and blend to form a smooth paste. Keep aside.

Heat oil in a wok on medium heat and add curry leaves, cumin seeds, mustard seeds, poppy seeds, onion paste and add a pinch of salt and fry till golden brown. Add salt, turmeric, fenugreek, coriander & chilli powder and salt to taste and fry for a minute and add diced tomatoes and the tomato puree. Fry till it starts leaving oil. Add coconut milk, cloves, tamarind, sugar, cinnamon and a cup of water and simmer for 5 mins in low heat until gravy thickens.

Add the eggs, green peas and boiled eggs. Add 1 cup of water and bring to boil and reduce the flame. Simmer for 10 minutes or till very little water is left.