Every day we start the day with breakfast. When we travel, that breakfast can also tell a lot about the customs. If we have the opportunity to take a typical breakfast place we visited, we will share one of the daily customs of its people. We try their daily flavors and will copy a fundamental routine in everyone's life.

This time we travel to India, with a flatbread that despite what you can imagine results into the flakiest bread. This is Paratha, a quick bread that is prepared with leavening. It is an ideal breakfast food to replace the traditional American pancakes or the elaborate croissants because they are a mixture between them.

Its peculiarities are that it is a bread that does not have yeast. It is made with ghee, a butter that is removed by the effect of cooking the milk proteins and water. Paratha is the union of two words that mean layers of flour and they are crispy on outside and soft inside. There are endless variations of paratha, that is stuffed in every way possible.

The Indian food more popular in the West is typical of the North of the Indian subcontinent, a summary of the Punjabi and kashmiri traditions, very influenced by Persian and the Islamic invasions suffered under the Mughal dynasty with the Mughlai cuisine.

The laccha paratha is a typical Indian bread that looks like a flatbread and may be accompanied by any kind of dish consumed usually during breakfast and dinner. Paratha is the union of two words that mean layers of flour and they are crispy from outside and soft inside while there are endless variations of paratha, that is stuffed in every way possible, even if not stuffed and wrinkled, especially salty but also sweet.

Despite having in common the basic ingredients, the bread is produced in a wide range of types that differ in seasoning and workmanship. It assumes various names. Among the most common are aloo paratha, gobi paratha, mooli paratha, onion paratha, paneer paratha, methi paratha and others. The Mughlai paratha is a type of bread very simple to prepare, filling of beans, meat or paneer. It is hearty and delicious.

The Paratha as I say, are traditional fast flatbreads of India. They are in flaky form. These that I present to you today is called Kerala Paratha with fillings based on cooked potato and spices. The base mass is prepared in both cases with flour, milk or water, ghee or butter, a pinch of salt and another with sugar to give color. Aloo Paratha although is stuffed, whole wheat flour is used more commonly. 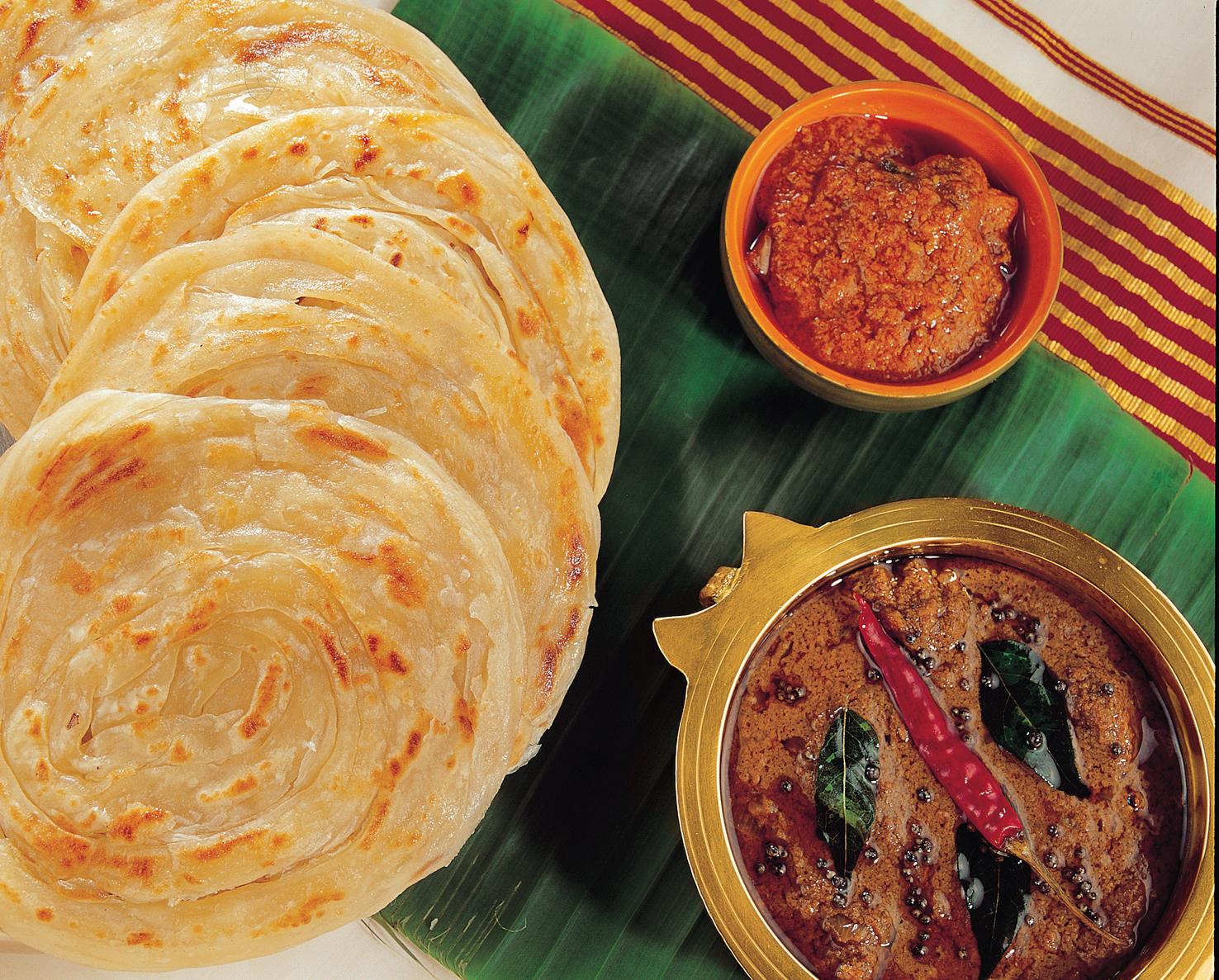 In India there are prepared Naan bread, to eat with the main course especially spicy preparations, which balance in an amazing way the intensity of the dishes.

The flaky effect of Kerala Paratha is achieved by stretching the dough, very thin as cigarette paper and then folding it like an accordion. Then twist that dough folded like a snail and finally go back to stretch it into a pancake shape. It is clear that prior to folding in the form of an accordion, the dough is varnished with ghee, oil or butter, to achieve that puff-like effect.

Once given shape, they are cooked in a pan, preferably iron, also varnishing the paratha with ghee, at least on one side. And at the time of serving people "preen" a bit to break the layers that have formed.

Make the dough by adding water to the flour. Knead it to convert into smooth pliable dough. Add little clarified butter to it and knead it again. Make small balls out of the dough.

Break the eggs in a bowl. Add a little red chilli powder and salt. Whisk this mixture well. Keep it aside.

Put a fry pan on a medium heat. Pour cooking oil on it and heat it. Add chopped onions, ginger and fry on medium heat till they become golden brown. Add the tomato, cauliflower florets and capsicum and fry it for few minutes. Now add eggs, salt, green chilli and mix it properly. Cook the mixture until eggs are well done. Put coriander leaves into the mixture. Take off from the flame and leave the mixture aside.

Heat the griddle. Take the rolled paratha and keep it on it. Cook the parathas on a medium flame. Apply some butter on the top and let the paratha cook for a few seconds. Be liberal with ghee or oil. Flip the paratha and fry both sides properly in butter and become golden brown.