We begin the story of a trip to Guatemala, in which we visit ancient Mayan cities such as Tikal. I took the step, and I regret not having done it before! My trip started when I saw a flight offer to Guatemala and I do not know what impulse it gave me to end up buying it 15 minutes after seeing it. I start looking for information about the country and places to visit.

Although there is a direct flight, I traveled with a stopover in Miami. Security controls at the Miami airport is excessive with huge queues. There is not a single smoking area in the entire airport. One has to go outside, and not only that, but in the street one cannot smoke in any place. There is an authorized area, that is, a piece of street with ashtrays where one can smoke.

Both to enter Miami and Guatemala, we have to fill out a lot of questionnaires and forms. In Miami, they even record with a fingerprint and photo included. Well, after a long trip we arrived in Guatemala City, at 9:00 local time. Our bags leave the last and after sealing passports and others, finally we left outside 1 hour later. When I leave the airport (which is small) I see it is all fenced. People waiting for passengers are on the street, so at the door were the cars sent by the hotels.

The car continues and we ask the driver to leave us at the junction near the hotel, which is on the outskirts of the small town. After leaving the backpacks and clean a little, we went up to the reception, and we sat for a while to watch television while we talked about the impressions that his country was leaving us.

We asked for a recommendation to go to dinner and the manager sent us to a restaurant, a few minutes walk in the same street as the hotel. We dined well! With a full stomach and very tired, we go to bed soon. 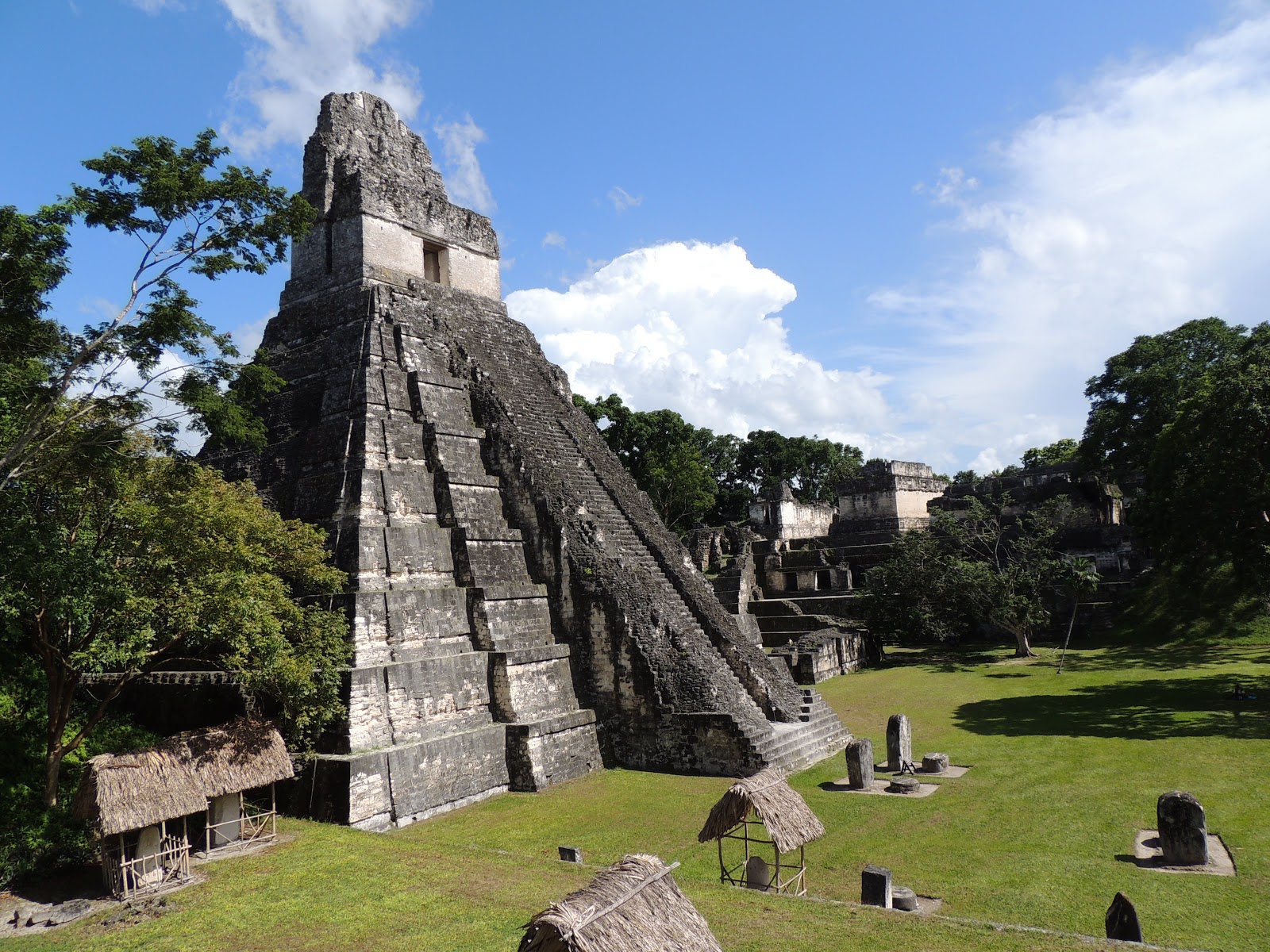 At 4 o'clock in the morning we were on foot, since we were moving to the Peten region, to the north of Guatemala. It is the most extensive but less populated area, because it is surrounded by thick jungle and communications are difficult. We fly to the city ​​of Flores.

In Flores we stayed at a boutique hotel. And by the name you can guess that it was not a hostel precisely. It was the most expensive accommodation of the trip, but we wanted to treat ourselves. Once we settle in our room we looked for an agency, because we wanted to hire a few excursions. We had previously looked on the internet from home, but finally decided to do it on the site.

A wise agent caught us on the way, took us to his agency and made us an offer for the excursions we wanted. So, after haggling the price conveniently, we accept. We return to the hotel to wait for the transport to go to Tikal. From there we go by bus for almost 2 hours to the Mayan archaeological center of Tikal, with a stop before to have an opulent breakfast with a sandwich, a homemade cookie, a banana and a freshly made smoothie.

We made the visit with a small group and a nice guide. We started at the Visitor Center, where the guide introduces us to the history of Tikal. Tikal was declared by UNESCO world heritage site. There are more than 3,000 buildings, although the guided tour consists of a 6 km walk. According to archaeologists, Tikal would have been inhabited for more than 1,500 years.

In that period, the Mayan civilization reached a very high cultural, artistic, architectural, urban and astronomical development. It is the only pre-Columbian civilization that developed a writing system and incorporated zero into its numbering system.

We then continue on a path through the Ceiba, a tree considered sacred by the Mayans. Crossing a path we reach the Complex P, where we can climb to the highest part to see some amazing views of the park, especially on the left. We continue through the park and go through some mountains, buried temples that have not been excavated.

Upon entering the Archaeological Park of Tikal, the first impact comes with the Great Plaza, the heart of the ancient city, where all public events were held. It is surrounded by four large buildings. In the east and west, are Temple of the Great Jaguar and Temple of the Masks. First we approach the North Acropolis to see the square from the top with the two temples, one on each side.

The views are impressive! We have a good time traveling the acropolis and seeing the Great Plaza from every angle we can. Then we go to the back of Temple II , which can be climbed by wooden stairs that have enabled not to wear the main front steps. From there you have very nice views of Temple I and the square, but it is almost impossible to take a picture of Temple I.

In the East Square, where two old roadways open, the structures can be observed. For the Mayans, the ball game was ritual, and the loser was sacrificed. I only have an idea of ​​the real dimension of Tikal from the top of Temple IV, the tallest building in the entire acropolis. The climb is difficult through a steep staircase with wooden planks (accessed by the back of the temple).

This Temple IV, called the Two-Headed Serpent Temple, greatly exceeds the height of the trees. In this temple a scene from the movie Star Wars was filmed. From there we can appreciate the immensity of the jungle, and the silhouette of the other six main temples. We continue walking until we reach the area known as the Lost World, where the pyramid is believed to be the oldest building in the Tikal park.

From there we returned to the great square, where we climbed to the top of Temple II to have a better view of the plaza and the temple of the Great Jaguar. There is a large bonfire in the center, where black smoke rises high, and Guatemalans are all around. Music plays throughout the square. Some make a kind of ritual, a small group is dancing and many are just sitting talking.

The guide gives us one last explanation before saying goodbye to us, until here the guided tour arrives! When we go down we enter the square and we mix with the Guatemalans and we enjoy seeing their traditions. We are there for a long time, until we get tired, and we decided to go and see what we can of the park.

Tikal offers a combination of history and nature, since it is both an archaeological site of great importance and one of the most important nature reserves in Central America. In the interior of this tropical forest, more than two thousand plant species have been identified, among which stand out varieties of ceibas, mahogany trees and zapote trees.

Among the varieties of fauna the spider monkeys, howler monkeys (or zaraguates), coatis, toucans, iguanas, tarantulas, and even a crocodile as well as infinity of insects, and mosquitoes can be seen roaming. We ate at the archaeological park, talking with another Guatemalan tourist. The man in his 40s told us that he was a primary school teacher.

On our own, we left the square at the back and headed towards the Central Acropolis, towards Temple V (the second tallest temple), towards the Plaza of the Seven Temples and towards all the structures that we found along the way, visiting everything practically alone.

At 2:30 pm we return to the entrance because the park is quite large and we do not know exactly how long we can take to reach the entrance, which is where the driver who will pick us up at 3:00 pm. Along the way we are surprised by 3 wild boar running past us! We follow the path until we reach the main entrance, where the agency picks us up on time to take us back to the hotel.

We leave Tikal thinking that we have lacked time to go through the park well, since it is huge and we have dedicated a lot of time to the Great Square, but we hope to return at some other time and enjoy everything without having to look at the clock.

After crossing El Remate, we went directly to the hotel. Despite being 4pm, they still serve meals. We ordered food that are quite good and that, being alone in the restaurant, they serve quite fast. The only weird thing is that in the menu as a drink a watermelon shake comes in. So we ordered some lemonades and we left the shake of the menu for dessert.

When leaving the restaurant, without stopping at the hotel as it gets dark so soon, we approach the lake. It is a very nice place with a small dock and there are fishermen and a couple of families, some children are taking a bath. The boys cheer up and jump into the water, they say it's even hot! Since we are there we stayed to see the sunset, it is the perfect place, very quiet and really beautiful.

At about 5:30, having already the sun set, we headed for the main street of the town although the truth is that it is almost all closed and we can not see anything remarkable. We arrived at the hotel, where we sat on their jetty to see the views until there is practically no light.

The hotel is in the middle of nowhere, surrounded by jungle and all its fauna. The rooms are divided into small bungalows. It is rustic but cozy. We have a night swim in the pool and in the outdoor Jacuzzi in that jungle environment after the exhausting day of walking with the sound of howler monkeys in the background.

And back in the hotel, we had some muffins and other sweets that we bought in a kind of bakery very close to the hotel and that will be our dinner today.