Today I saw the Eiffel Tower. Yes, today I saw her. You will say, so what? We all saw it once! It is true, we all saw her hundreds of times in posters, postcards, magazines, television, movies, and even in cartoons. But today I saw her there in front of me. Face to face. This was our first meeting.

At first sight I admit that I did not have too much expectation. A bit because everyone told me so much about her, and I do not know if it is to take the contra, but I do not usually like what everyone likes. Another, because after having toured much of Europe, I had seen great works of art in the form of paintings, murals, sculptures, churches, bridges, buildings, which are really wonders of man.

Now, Paris was waiting for me with an iron tower, gray crossed beams, stairs, antennas, and elevators in sight. It did not seem very tempting. Rather, it resembled any work in construction, but with more glamor. So I just hoped to stop by, see the typical postcard, take the required photo and say I saw it!

Let's go to see her sideways. But this marvel seems to be something grandiloquent or significant. It's that She has a no-know-what. And I say She because it is like that woman that one cannot stop looking at her and that, when it happens, leave that trail of perfume so that we do not forget.

It will be because of her colors. When I stand in front of her, I find the perfect contrast between the blue of the sky and the green of the Champs de Mars. It will be because Paris is a city of low buildings, and then She stands out splendidly around her. She is victorious before her weak opponents.

It will be for the same reason that one goes out and sees her. There She is, above all, showing herself with the arrogance of one who knows herself as beautiful.

Therefore, those who walk through Paris can see her from hundreds of different places, sides, and landscapes. Entirely, or just one detail. Day or night with sun or rain. Behind the Alexander III bridge or from Montmartre. From Notre Damme or simply turning in any corner. With the Trocadero fountains, or a flower stand that decorates it. From a bus or enjoying her light show lying in Champ de Mars.

The truth is that when I saw her, I was unconsciously walking towards her. Because without doubt, She has some magnetism. And there she took me. We face each other. Alone, Her and Me.

She is seducing me. I am dazzled. Did she fall in love with me? 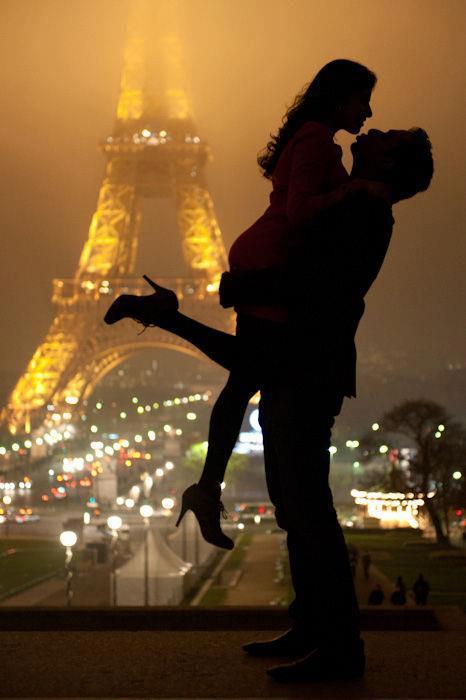 How did the love story begin?

The first time I traveled to Paris, what I most wanted to do besides eating croissants and macarons was to see the Eiffel Tower. And, if time allowed me I wanted to climb to the top to see the city from above. But I did not count on how many people thought the same thing. The people waiting was so many that I gave up. Climbing the Eiffel Tower without queuing was a challenge that I was able to overcome only on a second visit. So that the same thing does not happen to you, I'll tell you a couple of tricks.

Paris is known worldwide as the city of love. It also contains a lot of wonderful and historic places, and incredible monuments, which are recognized in all corners of the planet and have become important distinctive of this spectacular city. One of them is undoubtedly the Eiffel Tower, and when visiting this beautiful city to know this wonderful monument is mandatory.

After having finished the appetite with the Arc de Triomphe, the next point I had to go to was the most famous tower in the world, the Eiffel Tower. This monument is the main brand of Paris and of all France, its most precious badge and the one that most people visit and therefore the one that generates the most money.

To get there, I took the subway again at the Charles de Gaulle stop and headed for line 6 to Trocadero. Although it is relatively close, we had a good walk on foot. When I came out of the subway station, I was flooded in a certain way with the same sensation as when I left the Champs Elysses to see the Arc de Triomphe. As soon as I went out and looked around, I found myself facing the Eiffel Tower, very far away and it looked small, but I was beginning to notice that it was the most visited landmark in the world.

Before walking to the foot of the tower, I walked peacefully through the Jardins du Trocadero, escorted by the buildings of the Musee National de la Marine, the City of Architecture and Heritage, the Musee de l'Homme and many others. From the highest point of the gardens I could take postcard photos.

But being a spring sunny day and with lots of people on vacation, it was difficult to go alone in the image. As I was alone I had to act as a photographer for Chinese, Japanese, English, Spanish, Germans and the world. I was an easy prey of can you take a photo please?

Around the Eiffel Tower everything moves. Everything!

I gradually got closer to the river Seine on foot, to cross it and get to the Eiffel Tower with the idea of going up, enjoy the views and take hundreds of photos. But before continuing, I was struck by the large number of vendors of souvenirs that were in the area. As expected and as I would later see, what they sold me in the legal stores around the tower, was worth two, three, or four times more than what the illegal ones sold me.

First, they ask me where I am from in all the languages ​​I could imagine and when they caught my attention it was when they gave me the price of everything they had with them. With 1 euro I think I had four small key rings of the Eiffel Tower. And those same keychains I checked shortly after that there were sold for 2 and 3 euros in the legal stores. So after having collaborated a bit with the black traders, as most of the people who passed there did, I went straight to cross the Seine.

The queues are endless

As I was reaching the other side of the river, the influx of people was increasing and where I could walk to taste it was beginning to be a bit canned. And the idea of ​​climbing to the top of the tallest tower in Paris was suddenly taken away from me when I saw the huge queues on the legs of the tower to go up. I think it would be 12 or 1 o'clock in the afternoon, but that was up to families, students, and retirees. So to go up there I would have to leave it for another time.

But the truth is that I settled for seeing the tower from below and take as many photos. It is also located next to large green gardens, called the Champ de Mars, where I could sit down to eat, rest and keep glueing my eye to that incredible work of engineering. How could it be otherwise? I was asked to take pictures of men and women of all nationalities.

In addition, I bought one of the few things that street vendors did not sell and something I had in mind to buy for a while. It is a French flag. I also let myself be seduced by the smell of waffles and I stuck to a luxury which in the budget trips can also be allowed.

And after spending much of the morning swarming around the Eiffel Tower, the Champ de Mars and approaching the Ecole Militaire, I set off again, this time to the Place de la Concorde, but not by the shortest route, but by the one that would allow me to see more things and in the shortest possible time.