January is the coldest month in south India. Always close to January 15, the Tamils ​​celebrate the traditional festival called Pongal. Here the solar calendar is still being respected for the determination of religious celebrations and traditional cultural events, and for the implementation of agriculture. This solar calendar, which is basically used by the Tamil population, is not synchronized with the North Indian calendar that we know as the Tamil New Year is set on what would be our April 14th.

Today is a special day for South India as the Pongal festival or the new year is celebrated! I spend the morning in the local cinema hall, as the atmosphere in the room is guaranteed with new release of Rajinikanth. The spectators express themselves with long and frequent whistles! Everything ends well in songs on kollywood dances that carry me with pleasure with popcorn to give company. I laughed like teens.

The tourist office organizes a trip to Bahoor, a village near Pondicherry with a small group. I was afraid it would be a tourist trap, but in fact we participated in an authentic evening amongst the locals. Watching the beautiful Kolam patterns on the front doors made me want to learn how to make! In January in Tamil Nadu, kolams are often made to celebrate the traditional harvest festival.

Besides the decoration and the symbol of prosperity, what I did not know is that these kolams made of rice powder, are intended to attract birds and other small creatures to feed on it, thus inviting other beings to their own home, that is, as a daily tribute to the harmonious coexistence of all beings.

On the other hand, it is not a religious celebration and all people, regardless of religion or creed, participate in this event, since it is a celebration of the prosperity associated with the harvest and the elements that contribute to it. The main point of the festival is to cook rice with fresh milk until it boils and spills out of the pot in which it is cooked. This overflow is considered a good auspice and indicates prosperity for the following year.

On the one hand, it is a simple but attractive spectacle, that of seeing and waiting for the boiling of rice. On the other hand, this rice boiled with milk becomes a delicious meal that seasoned with typical ingredients is served to all residents.

We also tasted pongal, a sweet dessert made from rice, cashew nuts, raisins, brown sugar and condiments such as cardamom, cloves and nutmeg. After returning back to the hotel we had a small local dinner at the restaurant with dosa and chutney. And it's crazy how time flies! The waiter mentions that tomorrow the restaurant will be closed because of a general strike in the major cities of Tamil Nadu.

A strike for what? It is to defend the ancestral game of jallikatu festival that is part of the Tamil tradition, also known as Ertajuvudhal or Manju Virattu. It is celebrated during the Pongal festival, where cattle are honored for their labor, the sun and generally agriculture. It consists of releasing a bull on a place where athletes try to kiss the animal with bare hands within a distance limit. 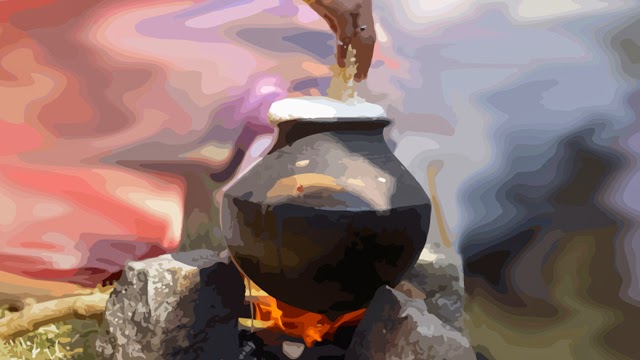 Today is the Mattu Pongal, dedicated precisely to animals that help in agriculture. Although it is said of the cows this celebration includes all the cattle, for example the oxen used to pull the carts. On this special day, cows are given special food like fruits, sugar and they are given a certain freedom to graze or wander at will.

But above all, for this celebration the cows are decorated and garlands are placed, sandalwood paste marks and even the horns are painted. All this is, of course, also a symbol of auspiciousness and gratitude. Cows and oxen are groomed for the occasion and men paint their horns in many colors.

In the evening, the procession of wrapped ox carts decorated with balloons, trucks or decorated tractors are organized. The hordes of young people gesticulate while dancing on Happy Pongal. Huge speakers pour out loud music. Well I can tell you that the journey to the temple in oxcart is long and uncomfortable but what a mood!

I liked my experience of celebrating Pongal for several reasons. I was able to see a traditional festival up close and tasting, again and again, the delicious sweet pongal, and above all for being a participant in a celebration that has its base in the eternal rhythms of nature.