Biryani is a typical dish of Indian cuisine that consists of a plate of fried rice with different additional ingredients, in this case with vegetables. Biryani traditionally has a mixture of spices that give it all the flavor and aroma, and yogurt that adds a bit of creaminess. It can be served as a main dish or as a side to a curry dish or a lentil dal. The vegetable biryani is also very tasty, served with a yogurt sauce.

The biryani is a dish of rice prepared with a mixture of spices and basmati rice, meat or vegetables and yogurt. The biryani has an uncertain origin and some authors indicate a possible Persian origin because the name of the dish comes from the Persian beryān. It is very possible that it entered North India from Afghanistan, perhaps passing through the valley of the Thar. Other authors mention that may have a connection with Turkish pilav.

The dish, which was initially considered suitable for the upper classes, was made available for the lower classes during the Mughal Empire. Today it is a dish very closely linked to the Mughal empire in India.

There are many varieties of biryani and each type has its unique characteristics. From Kashmir to Kanyakumari, from east to west India, there are different varieties of this dish, which often have their roots in the ingredients and uses of chefs in the area.

It can be considered in all cases as a dish made in a handi or pot, with ingredients cooked together in the final stage of preparation. There are mixtures of pre-made spices in India that are sold commercially in supermarkets or shops, trying to reduce cooking times, but the taste differs considerably from traditional processing.

The spices and condiments used in the preparation of biryani contribute the flavor of this dish like the cloves, cardamom, cinnamon, bay leaves, coriander leaves and mint, apart from the ghee, ginger, onions, garlic, and yogurt. The most exquisite variants like the Calcutta Biryani often include saffron and the garam masala along with very lightly cooked and flavored meat and potato. It is one of the toughest to prepare.

For non-vegetarians, the main ingredient that accompanies the spices is the meat of chicken or turkey or lamb or mutton, which is the most popular or sometimes beef. In India, a very popular variety of biryani is made only with vegetables called Tehari. There are two varieties according to their way of preparing the Katchi Biryani prepared by the method Kachi Yakhni or raw sauces and Pakki Biryani, where the meat is marinated with spices. Both methods employ seeds of cardamom and saffron.

In Bangladesh, the tehari concept refers to Biryani prepared by adding the meat to rice as opposed to the traditional Biryani, where rice is added to the meat. The difference between biryani and pulao is that while in the pulao ingredients are cooked together, in biryani rice is separately cooked from other items. The dish is usually served with eggs, raita, korma, a curry or a dish of brinjal or eggplant called Hyderabadi bagara baingan and Mirchi ka salan.

There are different methods of preparation of biryani. In India, the Hyderabadi biryani is one of the most popular versions of biryani. The kitchens of the Nizam usually had about 49 types of biryani, which included fish, partridge, shrimp, deer, and hare. The Sindhi biryani variant is very popular in Pakistani cuisine and there are several varieties of biryani in almost all the territories. Another popular biryani dish is the Awadhi biryani. 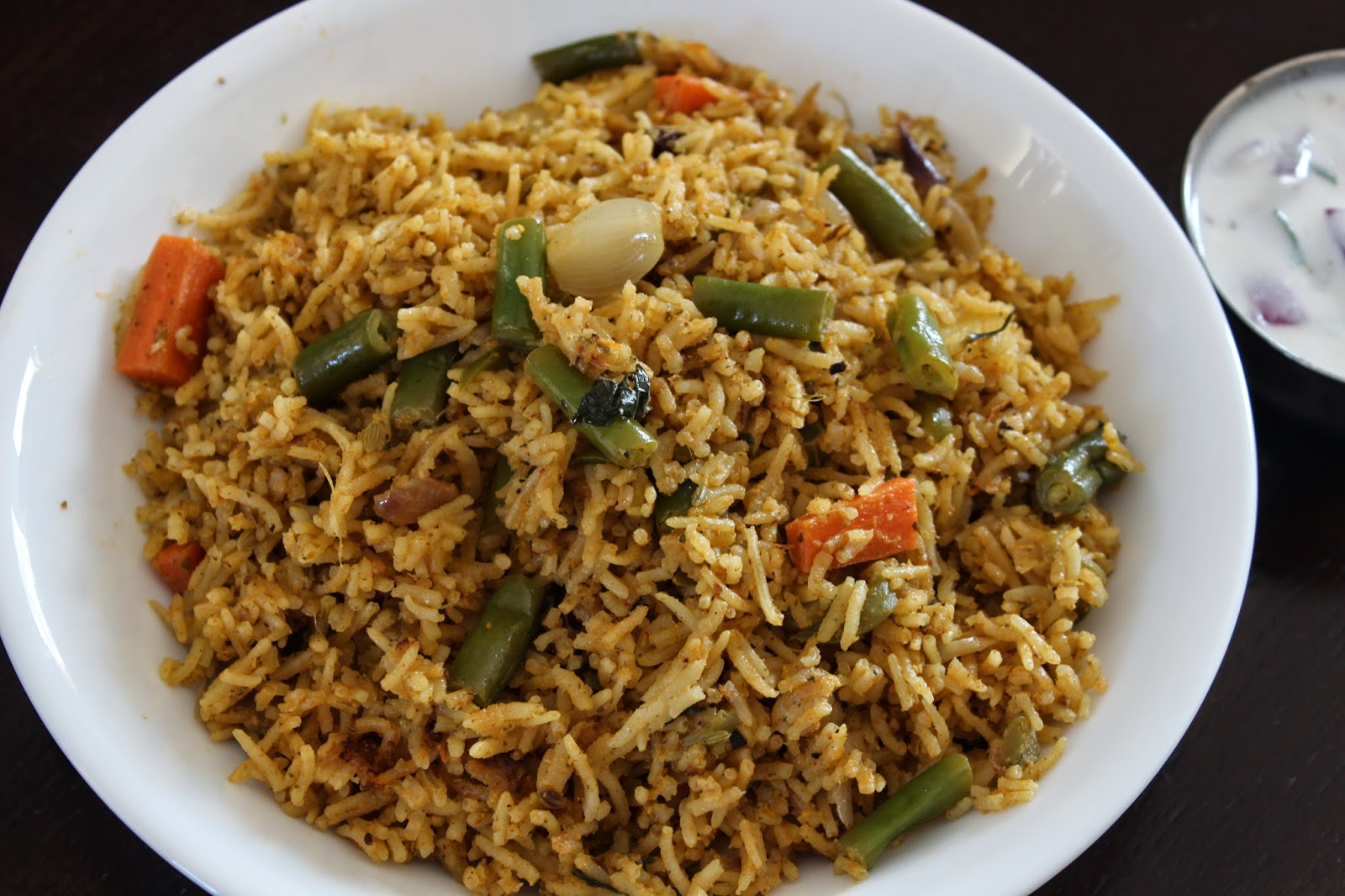 Heat a casserole with oil and fry the chopped onion until golden brown. Add the minced garlic and ginger and sauté for two minutes. Cut the carrot into slices, the tomato in cubes, the green beans into smaller pieces and separate the cauliflower into florets. Add the biryani spices to the sauce, stir well, add the vegetables and sauté until they are well mixed with the spices. Add the yogurt, tomato and lemon juice and continue cooking until the vegetables begin to soften.

Add the rice and water or vegetable broth and bring to a boil. Lower the heat to medium-low, cover the pot and cook the Indian rice for 10 minutes. Turn off the heat and without removing the lid, let the rice rest for 5 minutes.

The veg biryani is ready to serve! Accompany it with a yogurt sauce if you like.