In the collective imagination, Indian cuisine is very often associated with super spicy dishes based on rice, meat, vegetables, and legumes. But the Indian culinary art presents some goodies regarding the typical sweets. First of all is the Gulab jamun, typical of the entire Indian subcontinent. The gulab jamun originates from an Arabic dessert, the Luqmat Al-Qadi, which became popular in the Indian subcontinent during the Mughal era.

In addition, the dessert became popular in the Turkish-speaking areas, following the expansion of the Ottoman Empire. This star dessert is present in the menus of all Indian restaurants, although its origins could be shared with Pakistan (where it is also very widespread).

They are shaped like small balls, and their main ingredient is khoya, a kind of cottage cheese that is fried and dipped in sweet syrup, to be completed later with saffron (hence its red color) and honey. Rose water is used to sweeten it. The term gulab jamun comes from the word Gulab or rose water, referring to the homonymous syrup, and the Jamun is a fruit of Southeast Asia, similar in size and shape. 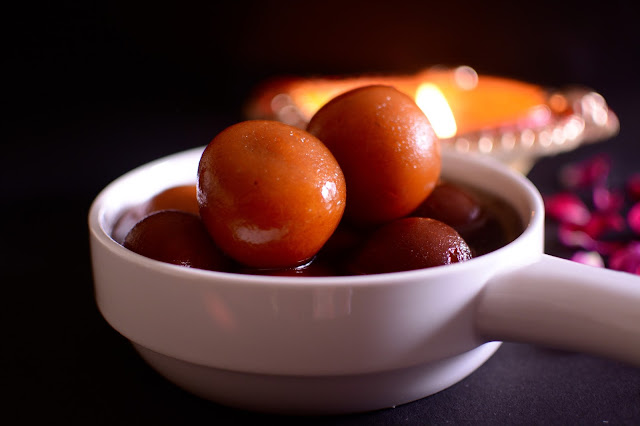 I headed north to the desert of Thar, in Rajasthan. The trip is long. I cross half the country, but traveling on Indian trains is a pleasure. The second class involves being in compartments of six bunks, chatting with fellow travelers. In India, everyone seems willing to strike up a conversation. You can be treated to the homemade delicacies of some Indian mom, accompanied by traditional tea with milk and spices, served in disposable clay cups by the vendors who roam in the corridors of the train.

It was time to take a break on such a long journey. We go down to stretch our legs and buy some snacks. As always, I would chime everything that was around me. About thirty meters away, I saw it. It is an Indian beauty that makes you think that God was in a very good mood when he created it. Somewhat perplexed and letting out a sigh of chimerical longing, I turned around and went to buy some cookies in a stall at the side of the station. What a crowd, what chaos! And to vary the eternal litany of the lack of change to give me back. One of those discussions is approaching in India where one always ends up losing. I get friendly with the fellow sitting beside me.

We alternated chatting with tea, contemplating the somewhat arid and surprisingly unpopulated landscape compared to what I had seen of the country until then. And then a moment comes when it is time to bid adieu to my fellow passenger. I asked him the name of the city where he is planning to go down. And then came the sudden invitation from him. Why do not you come with me? He adds that some friends are waiting for him to go to Rajasthan. And then my mind goes into a tizzy. I then remember the golden rule. If you know someone interesting in the area, who shows interest in you, and seems to have time to share, never, never say no. The plans, as well as ideas, must be discarded when they no longer work. After five seconds I changed my mind and plan to join him. We got off in his city. No idea where it was. My friend told me the name, but I forgot it. I searched Google Earth to see if it came to my memory, but without success. Anyway, I'm somewhere in the center of India.

He leaves me in a hotel. There was a pool, and it was hot. After swimming a bit, I sat down to thank how good the superior forces were being with me. At nightfall, my train friend picked me up on his motorcycle. He was dressed in white shirt and black pants. So I ask him where are we going? He smiling says to a wedding.

What? Why did you not say me earlier? I shout. I could have bought new clothes for the occasion. I had no choice but to go with my traveler rags. The wedding took place in a large room, decorated with colorful garlands and many other flashy stuff. The atmosphere was very relaxed. The reception was warm. The presence of an outsider, even if he looks different, gave the event a different touch, I was told later.

It was not long before we left to dance, only the boys. The demure girls kept at a distance, looking, perhaps pondering who would be the best candidate for their own nuptials. While we danced, we laughed, and I adopted some local steps to reduce distances. In a break from the dance, I went to the extensive buffet, and there I saw them.

It was a tray full of gulab jamun, my favorite Indian sweet. I went over and tried one. The taste was very slightly liqueur, very sweet. During the night I overcame a bit, stuffing myself with gulab jamun. It was the richest Gulab Jamun I had ever tasted.

We went back to the party to continue dancing. I do not remember how in the end I returned to the hotel. What I do know is that, when laying my head on the pillow, I thought I should stay longer in this place, that I would receive other surprises. And I was not wrong.

Gulab Jamun may have originated in eastern India in Bengal and is equally popular in Pakistan and Bangladesh. A similar dish exists in the Arab cuisine, which is also served as dessert and is called the lu'mat al-adi. As in the Indian version, rosewater or even honey is used as a sweetener.

If we do it the traditional way, we need khoya, which is basically the solid residue of milk left after reducing it to simmer for several hours. It is the base of many Indian and Pakistani desserts, and gives a special touch. There it is easy to buy it, but in places where it is difficult to find, it has to be done in the traditional way by boiling milk. This process can take more than an hour easily, maybe a little less with the fire a little higher.

Either alone or accompanied by some chopped pistachios, vanilla ice cream or cream, gulab jamuns are irresistible nibbles to start eating and is difficult to stop. They can be stored in the refrigerator if there is any, inside their spiced syrup. Boil the milk in a bowl till it reduces to half cup. Cool and mix milk powder, flour, chocolate powder, cheese, sugar, butter, and baking soda. Mix properly and make it smooth. Leave it for an hour.

Knead the dough firmly and divide it in equal portions. Now, press the dough ball with your thumb and fill tiny chocolate chip and little bit of nuts mixture and roll them into round balls, covering the chip completely. Refrigerate for 15 minutes.

Heat the butter in a large frying pan on medium heat. Deep fry the balls in ghee over a slow flame until golden brown in colour. Let the fried balls cool and keep aside.

In a large pan, add water, sugar, cardamoms and saffron and simmer over a slow flame. Keep stirring the syrup until the sugar is dissolved. Filter and add rose essence to it. Put the fried balls in this solution and soak for 30 minutes.

Keep the ice-cream at room temperature till it begins to defreeze. Roll balls of ice-cream in flour and keep it back into the freezer for 2 hours. Heat oil in a deep bottomed pan and deep fry the ice-cream balls for a few minutes and take out before they start to melt.