About a month ago, I went on a week-long trip to the Cyclades with two islands on the program - Folegandros and Santorini. I did not know these islands at all, and in the case of Folegandros I had never even heard the name. In fact, I went to attend the Christmas wedding in Greece of a friend, and I took advantage of this trip to have a vacation.

It's probably not going to be a big surprise, I really enjoyed it during this trip. I tasted better versions of dishes that I already knew, but I also made many culinary discoveries. In this article, I will tell you about all these finds.

For those who would like to go on a similar trip, I have prepared a itinerary, based on my personal experiences to give you an idea of ​​what to do and what to eat. But before that, I want to thank my friends who invited me to their Christmas wedding in Greece. Without it I would not have discovered this hidden Cycladic treasure.

As Folegandros does not have an airport, the only way to reach the island is by boat. You can either go to Santorini by plane and take a ferry (about 1 hour ride with speedboats), or take a boat from the port of Athens, Piraeus.

These small extra trips obviously waste some time, but it's well worth it. It's also why Folegandros is quieter and untouched by tourism than some other Greek islands.

Approaching the port of Folegandros, you will be fascinated by its pristine beauty. This island is the perfect destination for relaxation and escape. There is not much more to do than "chill" under the winter sun and hike.

The best choice for comfortable accommodation is to stay in the main village of the island, Chora. Set on a clifftop, many resorts offer spectacular views of the Aegean Sea. And as the island is not the most touristic of the Cyclades, the price of accommodation is very reasonable. By the way, forget about Airbnb.

Arriving at the port of Karavostasis, it seems that apart from this small port there is nothing else on this island. But do not worry, there is more. It appears that the main village of the island, Chora, was intentionally built out of sight to avoid pirate raids. It is a strategic position that has helped to ensure its flawless preservation.

To go to Chora we take the bus from the city (Chora is the only destination of the bus that leaves from the port). The bus leaves everyone at the entrance of the village because access is prohibited to motor vehicles.

Chora is a white and very picturesque Cycladic village, full of stairs and narrow paths. It is perched 200 meters high, overlooking the Aegean Sea.

The island of Folegandros, like the other Greek islands, has a variety of local specialties that are worth trying. From Chora, to Ano Meria and the picturesque village of Agali we find many traditional taverns serving Greek and Cycladic specialties. The Kalasouna for example is a typical Folegandros cheese pie made with sorouto cheese and onions. As a dessert, we taste the Karpouzenia, a traditional sweet pie made of watermelon, honey and sesame.

For my first day on the island, I did not look too much. I stopped on one of the most beautiful squares of the village, at the Dounavi Square, to eat at the restaurant. I could not decide on a dish, so I decided to take two entrees with roasted summer vegetables and stuffed vine leaves, served with Tzatziki. It was really delicious and at the same time very simple and light.

After lunch, I tried to get lost in the alley. The most beautiful part of Chora that I could see was the Kastro, a set of alleys just off Dounavi Square. Kastro is the oldest part of Chora and has been inhabited continuously since its creation. Some of the houses are over 1000 years old and are surprisingly maintained in very good condition.

The three main plazas of Chora fill up after sunset, while locals and tourists dine under ceilings of bougainvilleas and festive hibiscus.

I had dinner on one of the places in the restaurant. I would have liked to take some of their vegetable gratin that seemed delicious, but it was a victim of its success and out of stock. I then took a dish with different vegetable stuffed vegetables. It was really good. I also had a bowl of tzatziki while waiting for my meal which was really good too. The special thing about this restaurant was that they had quite a few vegetarian and vegan dishes. In addition, everything was homemade.

Folegandros is ideal for hiking. The paths are deserted with sea and mountain views at the same time. Donkeys and goats come at times to give us company. To end this first day, I made a short walk (15 minutes) to the church of Panagia at the top of the hill overlooking the village. It was the perfect place to watch the sunset. 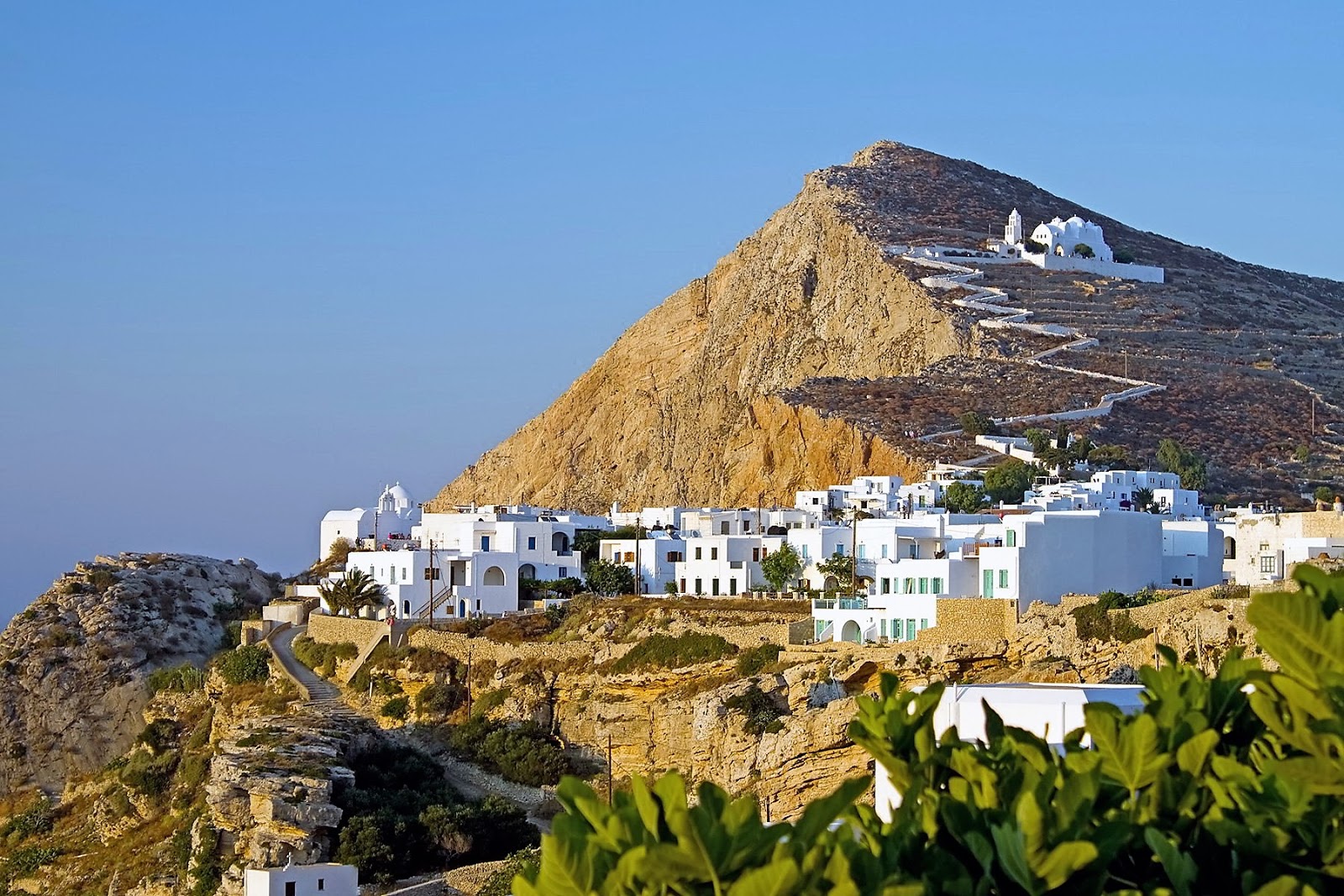 Going west of the island, there are many small roads and trails to walk around. The landscape is arid and without trees, but still beautiful and welcoming. Many of the old donkey trails are preserved, the distances are short and it is almost impossible to get lost. Many hiking trails end with a beach or a small cove. To the west of the island is also Ano Meria one of the great villages of Folegandros. There is, I think, no accommodation for tourists in Ano Meria (or very little). So it's not bad to go see the real life here and to eat in a restaurant by locals.

At Folegandros, you will have to try Matsata, a traditional artisanal pasta. It's like noodles, but cooked immediately after preparation. They are not sold in stores, but you can find them in restaurants, where they are served either with a typical red sauce, or with braised meat, rooster or rabbit.

I tasted the Matsata at a restaurant in Ano Meria. It was a restaurant on the main road that seemed to be run by a family, ranging from grandchildren to grandparents. There was no map. All the dishes available were written on a sign at the entrance of rabbit, chicken or pigeon served with matsatas or fries. When we sit on the terrace we can see a dovecote and a henhouse behind the restaurant. This suggests, of course, that the meat comes directly from this place.

Returning to Chora by the main road, there is a sign indicating the path to a bakery. Curious, I followed this path to find the said bakery and buy me a small dessert. The Panifias bakery was very small and was actually part of a house. At first it seems like it's closed, but in fact we just wait for one of the family members who opens the bakery. In this bakery, we find mainly cookies, brioches, biscuits and pastelis.

For our penultimate evening, we were particularly spoiled. That evening, was the wedding party. While I had said several times during the day that I would have liked a pork dish for dinner (local food, par excellence). The whole pork is roasted as it is represented in the medieval banquets and there was precisely one on the wedding menu. As we approached to take a picture, the bride's sister came to us.

In the end, this day has been one of the most memorable. But what satisfaction to live this adventure in family and to have seen the children so enthusiastic in this environment!

For this third day I decided to go to discover the beaches of Folegandros. Some beaches are not far from Chora and can be reached on foot if you like to hike. The beach of Angali for example, which is an hour from Chora on foot. There are also buses leaving from Chora that go there twice a day.

Angali is tiny hamlet with a small beach and 2-3 restaurants. As often for beach restaurants, these are not great, but if you are really hungry after your hike, you will find something to eat. Or to cool off you can opt for a Greek coffee brew, a specialty found in all cafes and bars of the island.

As my stay in Folegandros was coming to an end, I tried to condense everything I had on my list last night: eat a good gyros and drink Rakomelo.

For the gyros I went to Maraki Square with a very small terrace that friends had recommended to me. It was the best Gyros I have ever eaten. In addition, the price was really very low. We order fries in this restaurant with mint sauce, and it's really good. We also try Greek sausages.

To end the evening in style, I went to drink a Rakomelo in a bar atmosphere, which I did not manage to know the name, because everything was written in Greek alphabet. I just remember it was not far from Kastro. The inhabitants of the village there watched a sort of incomprehensible game on TV.

So we get back to the Rakomelo. It's a drink that looks a bit like the grog. It's hot Raki honey, and it goes much better than the raw Raki. I also tasted ouzo. But I liked a little less. My third day at Folegandros ended with the discovery of a very good restaurant.

It is a restaurant of Chora, a little away from the main squares, with a small terrace, which nevertheless has a very special atmosphere, thanks to its jasmine and its many cats. The decor is simple but very tasteful. All dishes were interesting, Greek specialties with a modern touch. I took the sea bass (very fresh) with a bergamot sauce and I was delighted.

On the fourth day, we had to take the ferry to Santorini. Folegandros will definitely be on my top 10 favorite destinations. I recommend it to everyone, especially in late winter when the weather is just perfect and there are not too many people.