After arriving early at the station the signs announce our canceled train. At the tourist information office we are told to go to another counter for last-minute seated reservations. There are no more seats. We opt for general class on a train leaving at 7:25. In this class anyone who has a ticket can ride. The problem is that there are more tickets sold than seats available.

In the main room, there is less queue at a counter. We do not know why but it is the only one where we will have a chance. At 7:20 we have tickets. On the luminous sign of the departures, the train is announced at the platform. We arrive on the right platform at the same time as the train almost left. But tonight it's Calcutta at all costs.

The wagons are composed of open compartments with 4-seater benches, a corridor and the other of two places facing each other. Each seat is occupied by 2 people. The corridors are saturated with standing passengers. The trip should last 15 hours. The other passengers are very intrigued by our presence here. We tell our story which is relayed throughout the wagon.

In spite of this salesmen manage to go up the aisle to make their trade. There are also hijras who get in the wagons. Feigning anger, they strike their hands imitating the sound of two bodies that make love. Many give them a few rupees. At midnight we finally sit properly. From there the train tends to get empty and before arriving in Kolkata there is almost a real place for everyone. We slept little, with our heads on our knees.

At the station we take a prepaid taxi, a yellow ambassador, to reach a charming boutique hotel housed in an old building. Chandni Chowk, the neighborhood where we live, is in full swing. It is in some ways here that all the handymen of Calcutta gather. In full construction, its anarchic lanes swarm with people. Workers and merchants are constantly working in noise and dust. Each smaller than the other, dozens of businesses succeed in a maze of muddy streets.

We eat rice, dal, curry and a salad plus a little rum, deserved! After the nap we walk in the neighborhood until the Kalighat temple and we go for dinner at Bhojohori Manna.

During these two hours of walking, we are in another world. Sespite the heavy traffic in the main arteries there are few horns. In the alleys it's even silent. The temperature is very pleasant, and it is mild. The Bengali cuisine is different. I discover new names and flavors. On the menu is dhokar dalna, aloo tandoor, chingri macher kalia and for dessert we have mishi doi. 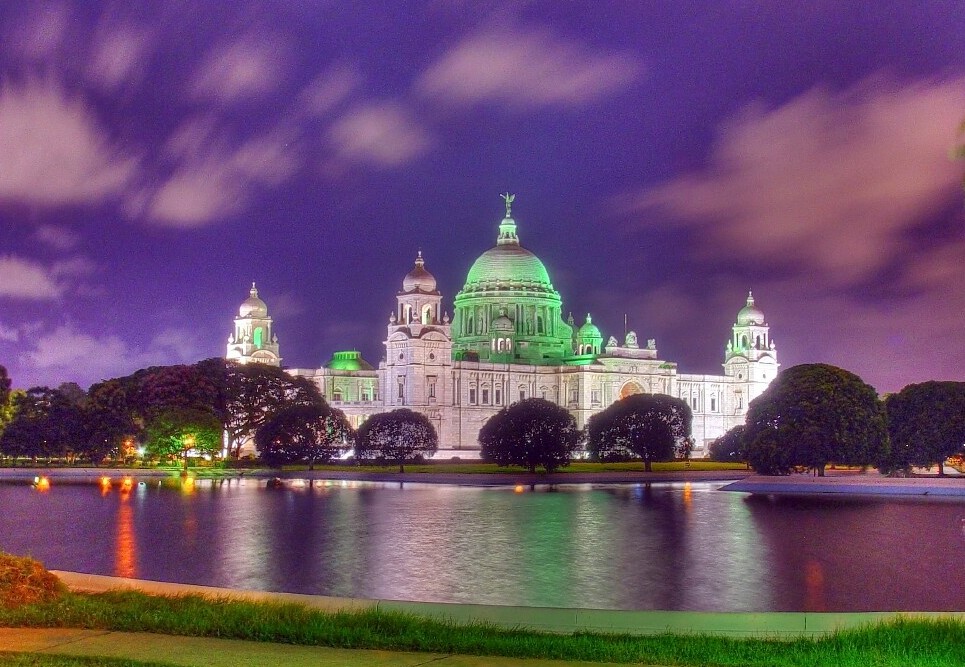 In the morning we began our visit with the Victoria Memorial. We went there by metro. Tickets are really cheap. The coaches are crowded. Victoria Memorial is a white marble edifice built for Queen Victoria's Diamond Jubilee. It is surrounded by a huge park. Inside an interesting exhibition traces the colonial past of Kolkata.

This large building, built in Makrana marble, the same marble used for the construction of the Taj Mahal, is one of the most impressive vestiges of the British presence in Calcutta. Its construction began in 1906 at the instigation of the Viceroy, Lord Curzon, in memory of Queen Victoria. It was not inaugurated until December 21, 1921. The statue of a bronze angel is placed at the top of the dome from a height of 61 meters. The lobby is 50 meters high.

But what makes this place so captivating is especially the beautiful park which extends all around the building. Lakes looking like mirrors, towering trees, multicolored flowers, and most importantly, a multitude of singing birds make us forget the horns and other noise of Calcutta. This park is a real haven of peace!

We then walked the streets of the Chowringhee road all afternoon. Kolkata is the most Asian of the Indian cities we visited. In the same streets, small stalls sit alongside luxury boutiques. The auto rickshaw do not pick up the customer, as they ply on pre-determined routes, like buses and not taxis. There are tana rickshaw pulled by men.

Old buildings more or less in good condition adjoin more modern buildings, also in more or less good condition! Every street, even the smallest, is lined with sidewalks. In short it is a pleasant city to walk. At lunchtime we had lunch at Peter Cat in the Park Street area, an establishment frequented by the middle class where one queues to have a table.

Here the menu is not vegetarian but rather very meaty, and the map of spirits, beers and wines is as consistent as the menu. Low chandeliers above each table create a cozy atmosphere. The waiters are all dressed in Afghan uniform. We have palak paneer and pulao with a lemon soda and a beer.

At dinner we went to Oh Calcutta! located in a posh shopping arcade of chic boutiques, bars, restaurants and a movie theater. We have aloo phoolkopir dalna, daab chingri, Kaju kishmish pulao and a gondhoraj salad. We have just received an email from the IRCTC announcing that we would receive the refund of our canceled train!

We regret a little not staying longer in Calcutta because it is certainly a city worth seeing! Of these few days, I will remember especially the smile and the helpfulness of passers-by!