Cherrapunji is the best known tourist spot of Meghalaya, and not only because of its record as the most rainy area of ​​the world, but because it is a true natural wonder, set among deep canyons from which gush out high and raging waterfalls. Scattered everywhere, almost unsettling, towering Khasi monoliths, I really feel like I am at the end of the world. The local population designates it under the much less musical name of Sohra.

I meet the members of the Royal Enfield Riders Association of Meghalaya called RERAM. This association, strong of a few dozen members, brings together motorcycle lovers and not just any. It is the Bullet, a must in India. During my stay at the lodge, I had several opportunities to verify that these enthusiasts deserved their great reputation. Friendly and always ready to help, they helped make my stay in Cherrapunjee a real success.

Meghalaya is famous for its waterfalls and caves, but one of the main attractions that is really specific to this region of India is the Living Bridges Bridges. Designed several hundred years ago (nearly 500 years for the oldest), they consist of intertwined roots and rubber lianas. They can be simple or more complex like double decker in Umshiang, the best known to cope with river floods.

Cherrapunjee offers sumptuous landscapes with countless waterfalls, green hills and tumultuous streams. At least, when all this is not buried under the clouds and everything is gray. The Cherrapunjee region is formed by a vast green plateau surrounded by bottomless canyons, hidden in an opaque mist and breathtaking waterfalls. Most of the rainfall occurs between June and September.

The hotel where we stay is lost in the mountainous jungle, a few kilometers from Bangladesh. We access by an old half-fenced road between cliffs. It is surprising to find on arrival that the hotel is well kept, quite luxurious considering the Indian criteria. There is even Internet access! 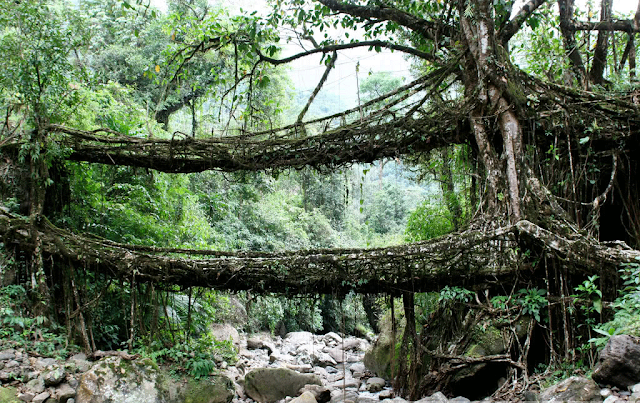 I went to the Tyrna village with a friend and member of the RERAM met the day before. After a great trip in a rented 350 cc Royal Enfield motorbike through the East Khasi Hills through the waltz of fog, the clear views of Bangladesh, forests streaked with waterfalls, we arrived at the village. We leave for a short hike, in search of the living roots bridges and the pool fed by the torrents. From there, a very long descent through the jungle and some villages leads to several bridges alive.

It is possible to see other similar bridges without getting tired, but this ride is really beautiful and worth it. We walk to the Nongriat village, yes walk because the only way is this. The most challenging part of this hike consists of a very long staircase, on a vertical drop of 500-600 m, half made of concrete steps and the other half of stone steps. The funny thing is the bamboo pipes that carry water from the top of the mountain. We wonder what miracle it can hold.

We finally arrive at the village, where the people welcomes us with a smile. An old lady proposes us to also make the dinner, and we accept with joy! Next morning it is time to go and admire the famous root bridges. There is even a quite spectacular double root bridge. They would take between 15 and 20 years to weave the roots to the other end of the river, but as the tree is still alive the bridge would have an existence of 3 to 500 years!

We go over the cable bridges, to see other root bridges. Here they grow and harvest the bay leaves, which they put in the tea, that is super good!

We leave Nongriat, and now it is the climb that awaits us. But for us it was our lucky day as it was a beautiful blue sky that greeted us, which allowed us to view unrestrained beautiful landscapes and endless views of the neighboring Bangladesh. The dark hills on the Indian side and the plains with streams of water on the Bangladesh side form a harmonious contrast.

As these hills are inhabited by Khasis, legends of this ethnicity are associated with many of their natural sites. Our small procession then stopped at the Nohsngithiang (Maswsmai), Kynrem, Thangkharang and Khoh Ramhoh waterfalls, a limestone formation resembling an inverted Khasi basket. According to legend, it has been turned into a stone, after been dropped by an evil ogre who was defeated by Khasi villagers. Another such precipice is named for a woman who was discarded after discovering that her husband had killed and cooked the daughter, she had of a first marriage.

We head on the winding roads leading to the village of Mawlynnong. Between Shillong and Cherrapunjee, the scenery was breathtaking, with its deep precipices and wooded hills as far as the eye can see. Along the way we crossed many villagers carrying large bamboo baskets with a strap around their foreheads and others carrying cloth bags in the same way.

We arrived at the glow of the full moon in the village of Mawlynnong, at the end of a narrow road zigzagging between high plantations. I had known since the previous day that this village had been elected the cleanest village in Asia but I did not expect to find a large parking lot in its center, full asphalt streets and many signs saying lunch and tea available here.

Mawlynnong is a small village of Meghalaya's East Khasi Hills, located about two hours from Shillong in the north-eastern part of India, home to only 95 families. Here all actively work together to keep the village always clean and tidy and every tourist is welcomed with a nice sign of bamboo. Its inhabitants live mostly by farming honey, fruits and nuts. Everything here becomes a source of income and livelihood.

The bamboo houses are decorated with pots of flowers on the outside, that adorn her long dense vegetation avenues. In turn, all are engaged in the maintenance of roads, streams and plants. It is not a duty but a real right that everyone accepts with full awareness. The inhabitants, however, devote to other activities, such as football and fishing. They organize real tournaments involving the entire community with passion and dedication.

The roads that pass through the houses, mostly wooden and on stilts, are lined with bushes offering a profusion of large yellow, white and pink flowers. A multitude of butterflies, sometimes as big as the hand, comes to gather there. Bamboo baskets are placed at regular intervals to receive the waste. Hymns resonate throughout the village. Tree-lined huts, accessed through an ingenious array of walkways, offer panoramic views of Bangladesh, just one hour's walk from the village.

Despite its remoteness from everything, every day it attracts tens of curious tourists who come here to photograph. Another curiosity of this little village is that the society is matriarchal. After marriage, it is the husband who moves and goes to live in the home of his wife. This tradition is for a very specific reason as a woman is the weakest part of the couple, she should be supported and protected by guaranteeing the inheritance of her father's house.

As I roamed through the village, I observed villagers preparing betel leaves, as well as an amazing system to dry the fish in a basket attached to the top of a bamboo pole. The cultivation of betel nut represents, along with fruit plantations like pineapples, jackfruit trees and orange trees and a plant from which are made the brooms, the main source of income.

I was able to accompany on the plantations women who were going to collect wood there and to clear plots. They formed a joyful group that hummed and joked while moving with their sickle on very sloping grounds. At breakfast, I was entitled to a steaming plate of extremely spicy instant noodles! The other meals are like most ordinary like the rice, dal, eggs cooked with potatoes and a chicken curry as a bonus, as well as excellent fruit.

Thanks to this strong love of nature, Mawlynnong is really an example of civilization for those visiting India for the first time.