We had breakfast and started our trip to Kochi. As we move away from Alleppey and ascend, the road becomes more serpentine. The temperature is cooler and the low clouds threaten to envelop us in a thin and very humid fog. The landscape becomes even greener and is beautiful. We started to see large tea plantations.

We make some stops for photos, and we take advantage of tea. At 12:45 we arrive at the bus station in Ernakulan, the twin city of Cochin, which is on the mainland. To get to Fort Kochi, we have to take a ferry that takes about half an hour. After seeing several sites, we stayed at the home stay. The accommodation is spacious with new and clean bathroom, and a large shared terrace. The site is fine, far from the dock area and shopping area.

Throughout the town there are huge trees that they call Rain Tree because they are so big that it is always cold under them. From there we go to a theater to see a representation of the Kathakali dance, but we saw it expensive and go to another one. We went in. The Kathakali is one of the major forms of classical Indian dance and is originally from the state of Kerala and one of the oldest performing arts known.

It is about telling stories drawn from the Ramayana and the Mahabharata, but only through gestures of face, eyes, hands and feet. Not a word is said. There is only music and sometimes a song. As we arrived about 15 minutes before the start time, we could see how one of the actors dressed.

Before starting the show, the actors are put on stage, painted and prepared. It is very nice to see how they make up. It is a bit intimate and there are few occasions when we can see this part (which is usually private) because it excites and interests equally.

The faces change color. I see one of the two main characters, the demon Thoranayudham, whom they help with the mask and makeup. The mask, are strips of paper that are put one by one, in an operation that lasts twenty minutes or more. The one who places the strips, show gestures to the girl, the paper, the tail, and smiles.

At the same time, the second character, who plays the devil's wife, Banayudham, also puts on make-up on stage. With powders and colored stones some are giving color to the face. Chopsticks and a small mirror are the only tools they use, and the end result is, at least, fantastic.

The actor who plays Banayudham seems to look at the person who plays the main character with a certain jealous look. Then, once all the characters are dressed, the musicians come on stage. The percussion is done by an older man, with a huge energy. There is the narrator, and the singer who also plays some small and very sonorous instruments.

The theme represented was the typical story of the struggle between the good and the bad or the god and the devil for the love of a young woman. The next 20 minutes are pure percussion. The old man gives a lesson of knowledge and power to the timbal, which he plays with two curved sticks. One of the cymbals accompanies it, but the weight of the act takes the percussion.

Now comes Thoranayudham, the character with the green face. The dresses and headdresses are impressive, but the best comes later. At the narrator's command, in a multitude of registers with gestures and movements of hands and body, gives meaning to the function. Without saying a word and with complicity and perfect timing with percussion (which does not stop at the whole show).

The narrator goes on saying, what the devil does next. This act takes another twenty minutes. Then comes the Banayudham scene and starts a tug of war with the devil in a series of gestures of jealousy, fights and fights. There are dances and fast movements. The gestures and looks between the characters are almost indescribable. The poses and expressions are something to remember without a doubt. Everything is so beautiful.

There is a time when they ask for the help of the public. After almost two hours, the show ends with the death of Banayudham at the hands of the demon Thoranayudham. The actors let me take pictures with them, quietly. I have really enjoyed it. At 8:00 pm we left delighted. After leaving, I entered the Santa Cruz Cathedral Basilica, which is next door. Then, while I was having a lassi, I saw a procession pass by, and so I went to see it, out of curiosity.

We went back to the hotel and bought a little something for dinner. After that we go for rest. 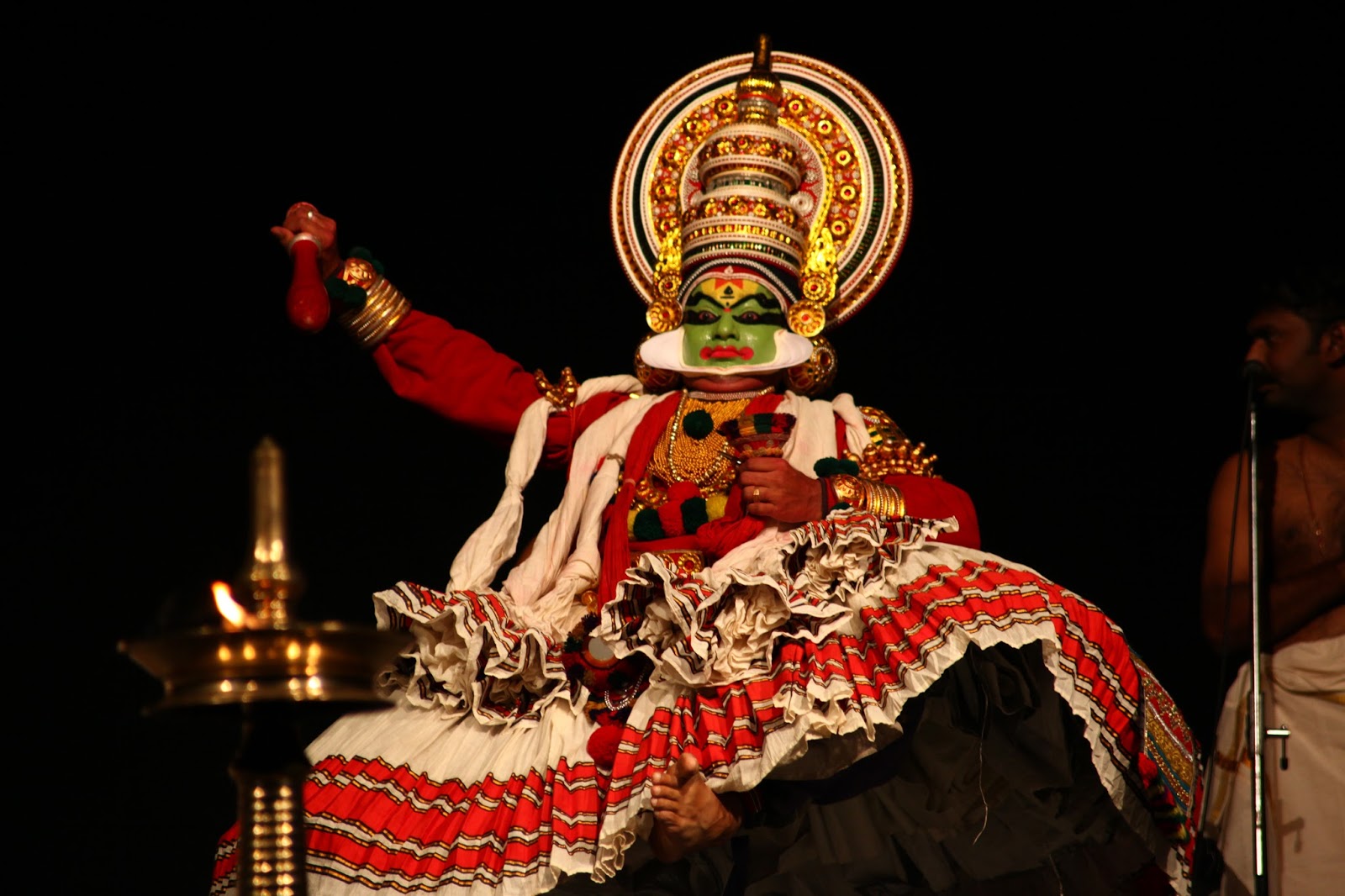