Traveling to Vienna has allowed me to experience the colorful autumn. We discover this beautiful imperial city calmly, in our style. Our flight is direct to Vienna.

For the arrival we choose the simple option and we take the CAT. To move by public transport we have purchased the ticket valid for 72 hours. They can be purchased at the machines of any metro station. They are validated the first time of use and serve for the following 72 hours.

There are tourist cards such as the Vienna Card or the Vienna Pass that can include public transport and discounts or tickets for various attractions and visits to the city. But as always, we do not pay for it, because to get to pay the price of the card we have to visit a lot of things.

Our apartment was located four metro stops from the city center, in a quiet residential neighborhood. The apartment is spacious, clean and well equipped. Nearby there is a supermarket. In the afternoon we visit the Karlskirche. At the ticket office they only accept cash, not credit cards.

It is something that we are not used to and we find it in several bars and restaurants as well. The church, a mixture of classic baroque and Rococo, has the peculiarity of having an elevator installed inside. It allows the ascent to the interior of the large dome, where I can see in detail the beautiful frescoes.

We continue our walk crossing the Ringstrasse (literally, circular street). The set of avenues that surround the district is called Innere Stadt, which is the center of Vienna. We pass in front of the opera theater, the Staatsoper, a majestic Neo-Renaissance style building.

Along the Spiegelgasse, a wide and lively commercial and pedestrian street, we come to Stephansdom, the symbol of Vienna. The cathedral is perhaps more spectacular on the outside than on the inside, with a mix of Romanesque, Gothic and Baroque styles. Its size stands out among the low houses in the city center.

Our walk continues through the pedestrian streets of downtown. We leave the map because the streets do not follow any kind of order and we discover the city adrift. By chance we found a good place to dine, that is a restaurant. The extensive menu offers typical Viennese food at a good price and several types of beer.

We rejected a couple of bars that looked good on the outside. When we entered one, we find the smell of tobacco, because smoking is allowed inside Vienna in many establishments.

In Vienna there are three imperial palaces, the Hofburg, in the center of the city, the Belvedere palace, now an art museum and the Schonbrunn palace, the summer residence of the Habsburgs.

We start our day with the Schonbrunn palace. The palace is about 40 minutes by metro from the center of Vienna. There are several tickets that include a more or less long route. Others are combined with the private parts of the gardens or with the Hofburg Palace.

We bought the pass, which includes the rooms of the palace with audioguide, the entrance to the Labyrinth, the Glorieta, the Privy Garden and the Orangerie. Built in Baroque style, this former Hapsburg summer residence from the 17th century shows the opulence in which the Austrian emperors lived. The site includes huge gardens and even the Vienna Zoo.

We were just over 4 hours, as it takes around one hour to to visit the interior of the palace and just over two hours to visit the outside. The audio guide take us through the different rooms and bedrooms of the family of Maria Teresa I of Austria. She is a very important figure of the Habsburg house of the eighteenth century.

We see the private rooms of Francisco Jose I of Austria, who reigned during the late nineteenth century and early twentieth century and his wife, the famous Empress Sisi. The Labyrinth is a fun area that includes some games. The Glorieta is the building that is at the end of the garden and from its terrace we get beautiful views of the site. We then enter the Privy Garden, a small garden also very well cared for. The Orangerie currently is a kind of greenhouse where they keep the trees in winter.

What I enjoyed most of the park was the labyrinth and its games, because without a doubt the orangerie, at least in autumn, is dispensable. What we later realized is that there are maps of the enclosure at the ticket offices, which would have been useful for us to place ourselves in the garden.

The whole visit represents a history lesson that covers one of the largest empires in Europe and the rooms to visit are not long. We return to the center of Vienna and find a very welcoming cafe. Unfortunately we could not smoke inside and this bothered us a bit, but the food is good and the price acceptable. Once again, they did not accept credit cards. It also seems to be Viennese custom of slow service, but friendly.

Then we took the tram and admired the majestic buildings that surround the Ringstrasse, including the Gothic-style town hall Rathaus, the Parliament, which is right next to it, the Votive church, the Burgtheater theater, the University and the Borsa. We went up and down the trams as we wanted. As it was a little late we could not visit the interior of any building.

Then we lost ourselves once again through the center, passing the Cafe Central, an institution of Vienna culture at the end of the 19th century. We pass by the Goldenes Quartier, the golden quarter, and see a number of luxury shops. We reach the area of ​​the Donau Kanal, the Danube Canal, at the end of the Ringstrasse. Here we see old streets are replaced by bland modern buildings, at least in the area that the canal passes through the central district.

We also went a little way into the Stadtpark, the downtown park, but it's already dark and the park is dimly lit so we go backwards. For dinner we stop at a restaurant from the medieval period with a traditional menu and great beers. I chose a goulash, Hungarian steak soup. 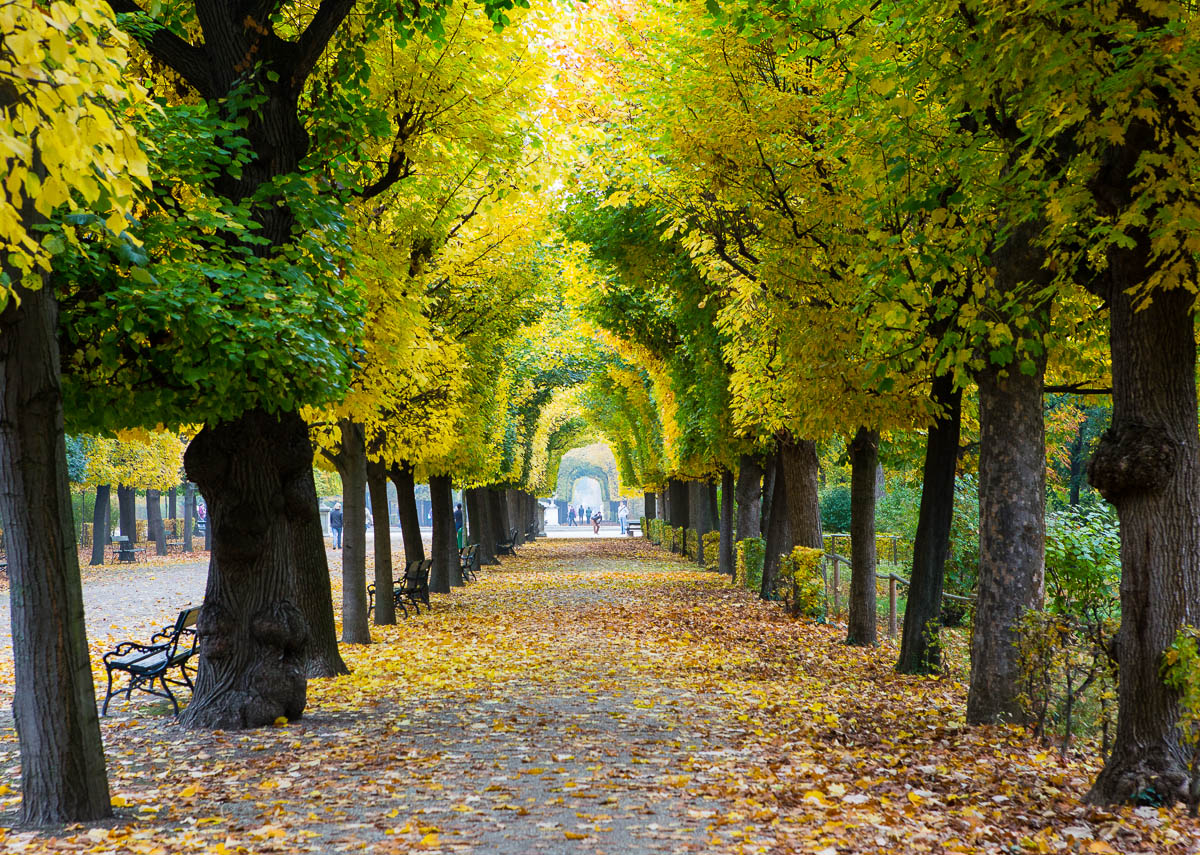 Today as is our custom in travel, we sign up for a guided tour. We usually do the free tours but in Vienna there are not any. We did not reserve but we were able to do the tour anyway. The meeting point is in Albertina, an art gallery behind the Opera. During the first hour the guide takes us on a tour of the exterior of the Hofburg palace. He tells us the history of the building and with it, the history of the last three centuries of the nation.

After the break, he takes us around the center of the city. We see St. Stephen's Cathedral, the Mozart House museum, the Capuchin church, the Jewish quarter and the church of St. Rupert (Ruprechtskirche) between several things from the outside. The tour is short and enjoyable. The guide speak English well and with the help of an ipad shows us images to illustrate his explanations.

We eat something fast at the bakery chain where they have a variety of sandwiches and sweets. We order a glass of tap water and they serve it for free, a custom we have seen in several places in Vienna. The next visit is the Belvedere palace. This Baroque palace consists of several buildings. Highlights include the Alteres Belvedere (high) and the Unteres Belvedere (low). The two buildings are at both ends of a garden. The Lower Belvedere has temporary exhibitions.

We decided to visit the Upper Belvedere for its collection of ancient and modern art. In this building that was the residence of Prince Eugene of Savoy, it houses works from the Middle Ages to the expressionism of the early twentieth century. We see the section dedicated to Gustav Klimt and the jewel of the museum, the famous painting called The Kiss. Other contemporary Austrian artists such as Kokoschka and Schiele also stand out.

With a couple of hours, including a walk through the gardens, which, like Schonbrunn, are free , we complete the visit. We spend the rest of the afternoon at the Prater amusement park, on the outskirts of the city. It is well connected by subway or commuter train. The entrance to the park is free and we pay to ride the attractions.

The star attraction is the great ferris wheel, Riesenrad, which is more than 100 years old. It takes about 10 minutes to go around, so we enjoy the views quietly. At the base of the Ferris wheel there is a small and beautiful exhibition of automata dioramas that tell the story of Vienna.

We take a walk through the park, which combines the most modern attractions, such as some roller coasters, with the most basic, such as several bumper cars or frightening witch tunnels of various themes. The park is very big. There are several repeated attractions and there were hardly any people riding. So the show was quite pathetic, with the thundering music of the deserted attractions, the bored workers. Slowly they were closing and the streets were getting darker.

There are several restaurants, but only one was lively. It is the Schweizerhaus, a huge biergarten with interior and exterior space. Here we eat the famous schnitzel, what we would call a fillet of very thin meat fried and fried. The restaurant has an air of a typical German bar, where long tables are shared with other diners. Maybe it's also typical of Austria, to share tables, but it hits us.

Once again, they do not accept cards, but they do have an ATM inside the restaurant. At 9 o'clock at night the park look very gloomy. There were young people walking or even families, but many establishments were closed. The lighting of the park is not even nice to enjoy the walk looking at the facades or lamps. It was also very cold, so we return.