Here begins our trip. After our wedding, our honeymoon day has arrived. We go to the airport to catch our flight to Osaka and take off punctually! Before taking off we could already tell that the trip was going to be long. People take off their shoes, take out the cervical pillows, the tablets, for many hours of flight ahead.

After reviewing the screen, see a couple of movies, dine, doze at times, we arrived at 8:45 am at the Osaka airport with a perfect landing. The suitcases leave quickly and we arrive at a mini immigration control with a very nice guard. I pass first, and he asks us, in a super English from Osaka, what we want to do here, and I with my profident smile tell him we are on honeymoon.

At the airport station we got the tickets to take the JR to Kyoto. It is easier than we thought. We got on the train and in about 40 minutes we arrived at the Kyoto Station in an impressive building. It is all black glass on the outside and inside with two shopping centers, a huge central gallery with mechanical stairs to the upper floors.

After a walk around the station to we enter the subway, to our apartment hotel, at the Gojo station. We bought the tickets and after two stops we arrived at our station in Gojo. Although it had an elevator, it was in the opposite intersection to the entrance of the hotel, and we had a backpack. We see where we can take the elevator, and then comes our first moment of Japanese kindness.

A man approaches us and half in English, half in Japanese, shows us the way of the elevator. Best of all, the man accompanies us ​​and we ride with him in the elevator. The good thing is when leaving the elevator, I already see the hotel and we have to cross only two crossings. The man says goodbye and goes in the opposite direction, towards another of the subway exits.

That is to say, he accompanied us expressly and he was not on his way. So we say that that myth of the Japanese that helps and accompanies, even if one does not go in our direction, is valid. We arrived at the zebra crossing and there sound little birds. It is the sign that you can go. We crossed the two steps and arrived at the hotel hall.

We arrived a couple of hours from check-in. It's 11 o'clock. We're hungry and need some rest as we have been awake for more than 24 hours. We leave the suitcases and the reception tells us that in an hour we will have the room. We got a couple of maps of Kyoto in the Hall and a map of restaurants in the area and we leave.

We're in Japan! Everything is in Japanese! My partner freak out with the kanji! Well, not even passing 30 meters, we see a restaurant with a letter on the door and it looks cheap and without thinking, we go inside. It is not full but there are enough people at 12 noon. They give us the menu.

We ordered katsudon and noodles and I ordered a beer. Then we discovered that in Japan food supplements are more expensive than food. So beer, in proportion is more expensive than the food itself. We eat in less than an hour and see the environment. We pay and we have to buy breakfast for a couple of days! We get juice and a kind of sweet bun, shaped like a small bimbo bread!

We did not know what awaited us in the shopping centers or in the food and supermarkets. Back at the hotel we check in and one of the receptionists carry the suitcases to the room. It has a large window overlooking the Gojo Dori, next to the double bed. The area between the entrance and the bedroom has wardrobes, a kitchen, a lounge area with sofa, table and chairs.

There is the sink in the same room and behind a door is the famous Japanese toilet. We leave the important thing in the safe. It is 2 o'clock and is too late to go to certain temples. We go to Sanjusangendo by bus, destination to Shichi-jo Dori to enter the temple. We make the first videos.

We enter the longest wooden temple in Japan and we see the figure of the Sahasrabhuja-arya-avalokitesvara, known as the thousand arms Kannon, or simply Kannon. It is a national treasure of Japan, and both sides of the statue are in 10 rows and 50 columns 1000 statues of smaller size than the Kannon of the thousand arms.

The statues are made of Japanese cypress wood and are the best-known image of the temple. At the foot of these statues we can see another 28 statues of guardian deities, of which the most important are those of Raijin and Fujin, which are respectively at the beginning and end of the building, and which are also national treasures of Japan.

We leave the temple and turn around. Then, we go to two temples near our hotel, Nishi Hongan-ji and Higashi-Hiongan-ji, north of Kyoto station. We arrived at 4. So we only have one hour to see them. Both have a large hall of the founder (Goei-do) and a smaller one, the Buddha's hall (Amida-do). In addition, there are several rooms, some visitable and others not.

We leave the Higashi and see the great gate of the Goei-do, one of the typical images when arriving and leaving Kyoto. Once seen the temples and tired by the jet-lag, we head to the combini and we look for our restaurant. Today we have sushi, and it was not bad at all along with the great Japanese culinary delights. Tomorrow we have to get up early. 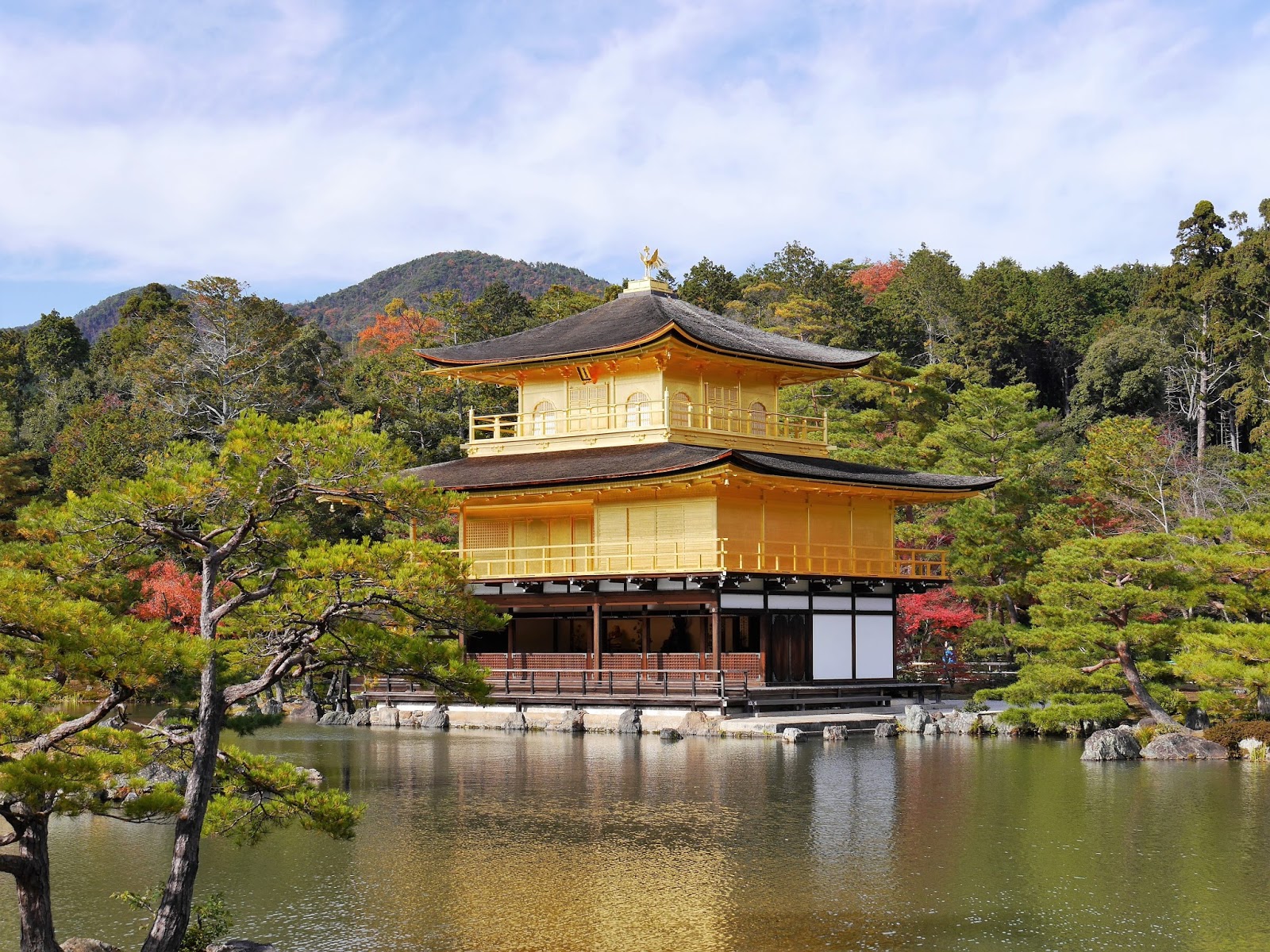 With the jet-lag we got up at 4.30 in the morning. Taking advantage of the change of time, we connect with Skype with our families. We groom ourselves, take maps and guides and take the bus direction to Kyoto Station. From there we go to the Kiyomizudera. It's 7:00 in the morning. We pay the entrance and enter.

We take photos and videos with Kyoto awakening and we go through the temple and the huge railing, supported by hundreds of wooden pillars. We arrived at the area of ​​the Jishu Shrine (Jishu-jinja), dedicated to Okuninushino-Mikoto, a god of love, where are the famous love stones, located 6 meters from each other.

We do the tour with our eyes closed, all recorded! And we are almost alone, a couple and little else. We see the stalls and the rest of the sanctuary. We follow the tour of the temple through the forest area until we reach the Otowa-no-taki waterfall, where three water channels fall into a pond. We take photos!

We left the temple and Japanese school groups begin to arrive. We continue towards the Ninenzaka slope and we see the typical buildings of the area. Locals start to open the stores but we leave the shopping for another quieter moment. And we take a picture with two Japanese schoolchildren.

We climbed a fair slope and arrived at Ryozen Kannon, war memorial commemorating the Japanese who died during the World War. The most interesting thing about the temple is the 24 meter statue. This monument has a tomb of the unknown soldier of the World War II.

Under the statue there is an image of the Bodhisattva Ekadasamukha and images of the god of the wind and the god of thunder and commemorative tablets of 2 million Japanese who died in World War II. As there was no one, we were attended by a Buddhist monk. Although the temple on the outside was not a big deal, on the inside it gave us the possibility to see, even from afar, a part of one of the prayers that they make each day in memory of the dead.

We continue our route, cross the parking lot of the Ryozen Kannon and arrive at the Kodaiji. Officially it is called Kodaiji-jushozenji Temple. The temple is beautiful. It is formed by the Kaisando (founder's hall), Otama (Shrine), Kasatei (tea house), Shiguretei (tea house) and the Omotetmon (door of the Sanctuary). The temple gardens are beautiful, following the guidelines of Japanese landscaping and include a Zen garden.

We continue our route, and we go back through alleys looking for the Padoga Yasaka. We continue towards the Yasaka Shrine. It is a Shinto shrine, which we could call the Sanctuary of the Gion neighborhood. We continue towards the Heian sanctuary, but before we visit the Chion-in Temple. The temple is Buddhist and it is enormous, but what more it deserves in the enormous main door or Sanmon.

Near Heian we enter the Shoren-in Temple, one of the five Monzeki temples of the Tendai sect in Kyoto. The temple is super quiet, beautiful gardens, overlooking Kyoto. The heat tightens and we decided to go eat. We do not see restaurants in the area. We stopped at one with tables outside and accompanied by some Japanese schoolchildren we ate some Takoyaki. For dessert, we have ice cream and go to Heian.

We walk and we arrive at the great Torii that gives the entrance to the Heian Temple. I had already read that it was very beautiful and we entered. It has a lake with beautiful views, we take cool pictures there. We take this visit very calmly. When we left, we looked for the bus stop to go to the Kiyomizu-dera Temple to see the sunset.

To get to it, we have to go up Chawan-zaka street (Teatre Street). It is a street full of souvenir shops and a lot of people. This temple is typical to see at sunset. The temple itself is not a big deal but just for the views of the city and the sunset it is worth the visit.

First we enter what they call the womb of Daizuigu Bosatsu, the mother of Buddha. It is a completely dark stone corridor through which we have to cross, guided only by the wall. The truth is that it is an interesting experience to enter that intense darkness only interrupted by a stone illuminated in the middle of the road. Like all the famous temples in Kyoto, it was full of people.

The stores were already closing but we were able to buy some magnets. As this temple is very close to Gion, we went for a last walk around there, to see if we finally ran into some geisha, but nothing at all, just some inside a taxi. We took bus to go to the hotel and we were to go to do our last dinner in Kyoto!

This time we went in the other direction of the hotel to change a bit. We found a very lively area of ​​restaurants, and one had a blackboard announcing Okonomiyaki. I had not tried it on the whole trip. I told my companion what she thought and we went in. We were the only customers but we did not care. They took good care of us.

Here played Japanese rock music and we asked for the name of the group. And what a good time we had at that dinner. It would be because we knew it was the last. Later, more customers enter. We go to the hotel and we had to pack. We went back to the shabby bar to have a super sake and then come back to pack everything!