After a short tour in Delhi, we visit the old city of Hyderabad to discover a scene of extraordinary life. We took a night train to the city of Hyderabad in the state of Andhra Pradesh (now Telangana), about 700 km north of Bangalore. 6 hours passed and we woke up to see the city that gave us a first glimpse of what Hyderabad would be like.

We arrived at 6 in the morning after spending the whole night awake because of the cold that came in from outside, the noise of snoring, and trains that passed by. Slowly we went into the city. The good? We are very close to the hostel. The bad? The hostel was on the other side of 8 tracks with unstoppable traffic and no type of crossing in sight.

Even with our backpacks on our shoulders, we crossed the first street, and again the second street. Upon arrival, we found a strong harassment of the rickshaw, who insist on following us to sneak in front of us in the hotels and so take a commission. The search was very intense. It seems that the hotels are more expensive here and in the end, we ended up at the hostel. They treated us very well.

We went for breakfast near the Falaknuma Palace and waited for the driver who took us to Fort Golconda Fort. It is an eight-hundred-year-old fortress built on a mountain, which is mostly built on and around the natural granite cliffs of the mountain. In addition, the fortress is considered one of the most important diamond mines in the area.

For example, important and famous diamonds such as the Hope Diamond and the Koh-i-Noor, which is now part of the British Crown Jewels, have been found here. Many "unimportant" diamonds were placed in the fortress so that they reflected the light and brightly lit the many splendid halls. For example, they were placed in front of candles in the "shelves" to break their light.

After my very strenuous up and down descent, we went to see the spectacular tombs of the Qutb Shahi kings, which were about 5 minutes away by car. It is a huge garden where seven of the nine Qutb Shahi rulers rest together with other members of the royal family. 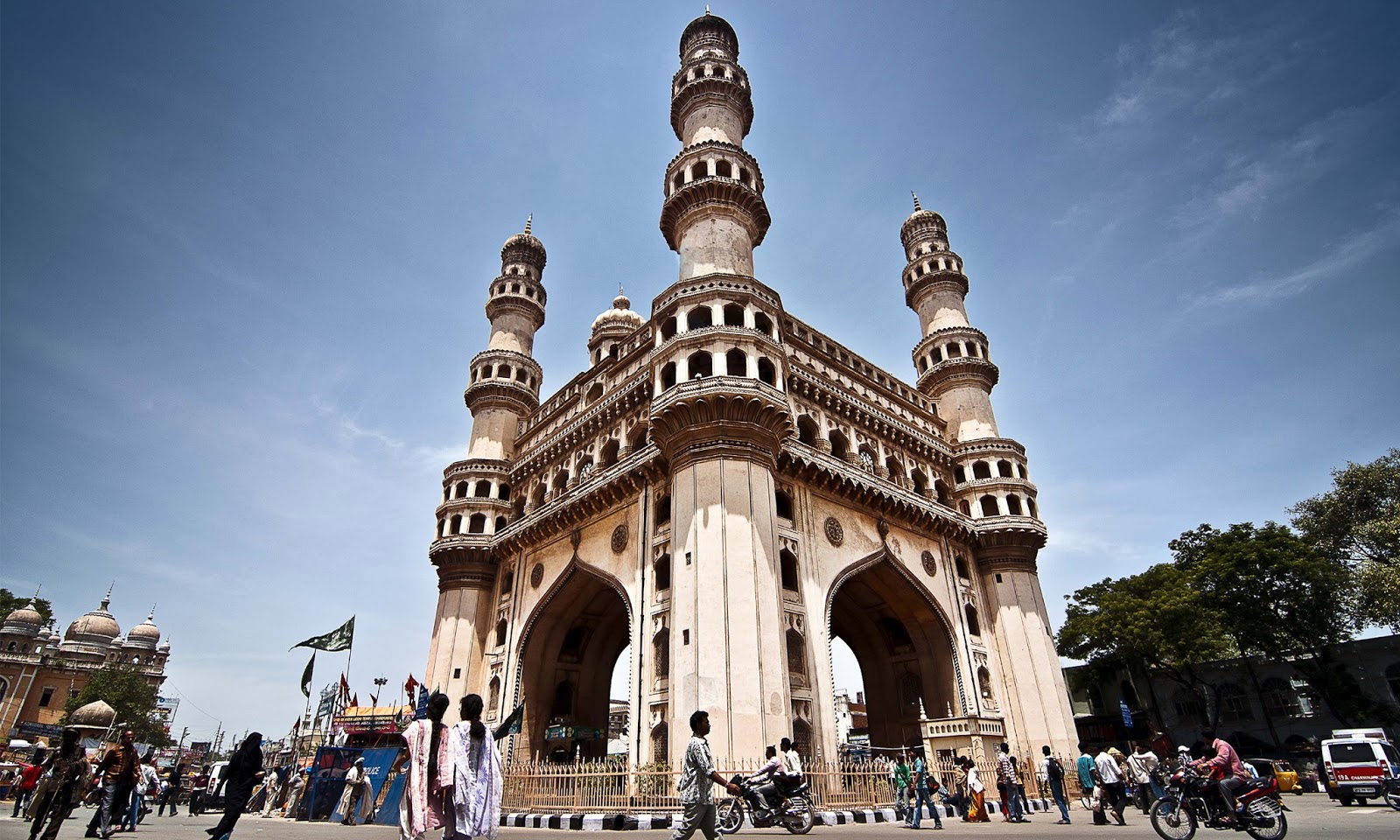 We only had one day to get to see Hyderabad thoroughly. So, we decided to squeeze the little time we had left. We then get back to the center of the city. In front of the Charminar, we ate and took a tour of this bazaar discovering what this city is famous for. We see many jewelry shops. As good tourists we took pictures. We try to do some "tourism", but we find that Hyderabad does not have much to offer.

But we walked a bit around. And the picture is more or less the same. Among all this madness, I pass through small alleys where they mainly sold clothes and shoes. In the street, there are many women who wear a burqa, and only their eyes are visible.

We arrived at the Sri Ujjaini Mahakali Devasthanam temple that we had seen on the map. It is built completely in white marble and we went in, took off our shoes, and went around images and flowers. We sat watching the sunset, to leave from there to the upper area of the city.

To finish our tour we went to the Hussain Sagar lake which separates Hyderabad from Secunderabad. On the map, it looks like a blue lake, with parks and pedestrian walks around. In reality, it has nothing. It has floating houses here and there. In the lake, there is a large figure of Buddha somewhat worn.

The parks turned out to be sets of grass and trees. We could only get close to the lake through a half-fallen gate that opens the way to a kind of viewpoint. What did catch our attention is that many families came to the place in their cars to see the lake. They stayed a few minutes there and then they left.

To end the stay we decided to go for dinner in the best restaurant in the city of Hyderabad. Once arrived on the spot, we discover a hideous tower, which deserves to be demolished. We climb into the elevator, ready to go get another restaurant. When the door of the elevator opens we have the breath almost cut to see a whole army of porters, hotel masters, waiters who greet us with deference.

The chairs are pieces of a museum. Many statues and delicate paintings are arranged in a very oriental decor worthy of the Arabian Nights. The waiters bring us the chairs and make sure we are properly seated. Once the order is over, and the dishes are on the table, the waiter flutter around us.

They do not let us serve ourselves and delicately portions of Hyderabadi Biryani in our plates. The way of serving with two spoons in one hand is also very classy. We feel a bit like princes. After having dinner there with enough Raita, we went to our hotel where there was a terrace with a pool and views of Lake Hussain Sagar Lake.

We go down to the disco and enjoy the party that allowed us to enter free to the open bar. We then run to the station to catch the train at 1:30 in the morning to Aurangabad. And well, that was Hyderabad.