We left at 7:10 in the morning without any delay. The flight lasted 2 hours. When we arrived at the airport and after picking up our bags we went out to catch the train that takes us to Termini, the train station in Rome. It is very well indicated where the trains are.

When we arrive at the station, we take out the tickets from the vending machines. There are two types, some that are white, green and red, and others that are blue and silver. We take out the tickets. The train takes half an hour to get to Rome and makes no stops, making it faster and more convenient than any other transport. The bus usually takes longer due to traffic, like the taxi.

The hotel in Rome was very close to Termini, right next to the Santa Maria Maggiore. The truth is that we are very happy with the hotel, because it is only 5 minutes from Termini, 15 minutes from the Colosseum and the Trevi Fountain. So for us it was a success. We had a very large room with its own balcony. In addition, the restaurant was on the roof, on a huge terrace from which the basilica looked perfect, as well as from our room.

We took the metro from the Altare della Patria stop to Barberini. We enter the church that is just above the staircase. When we entered, there was a man who check the clothes of the people. A girl who came in after us wore shorts and he made her leave the church.

There are countless people selling roses and the truth is that they constantly harass to buy something. Then we went to the Piazza del Popolo, which is very close. There is a viewpoint from which we can see the square and a good part of Rome. We ate at a tiny restaurant but with some delicious dishes.

In the afternoon we pass by the Piazza Navona, the Pantheon, the Santa Maria sopra Minerva with a very curious little elephant in its square and the Trevi Fountain. The Fontana is impressive, a super small square with the big fountain and lots of people. Here there are lot of guys nudging to take a picture with a polaroid imitation machine. Having seen all this, we went to the hotel to rest awhile.

On the way, we went up Via Nazionale. In one of the streets that is already stuck to the Piazza della Repubblica, leading to Santa Maria Maggiore, there is a very cool Murano glass shop. We bought glass animals.

At night we went out to dinner in Via Nazionale. There are many restaurants. We were in one where we had a huge pizza prepared in the stone oven. I loved this place. The waiters were super attentive. After this, we went to the hotel as we were exhausted. 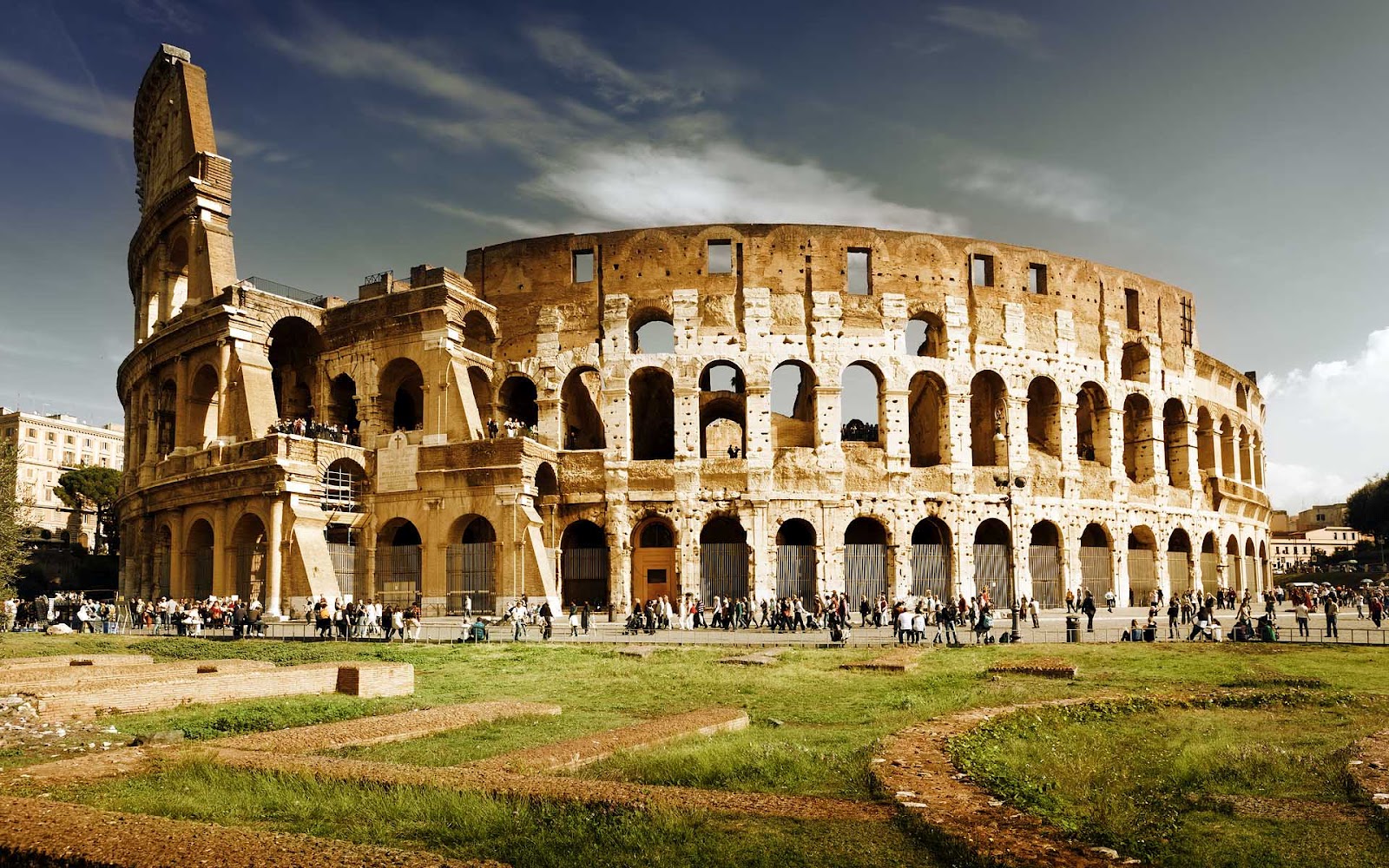 We got up early at 6:30 in the morning as we wanted to make the most of the day and see many things. Santa Maria Maggiore was the first we saw, since we had it just outside the hotel. The good thing about this church, like almost all the others, is that it opened at 7 in the morning. So we saw it without any problem in total calm.

Then we went down to the Colosseum on Via Cavour, stopping at San Pietro in Vincoli. The truth is that it took us a while to find it because it was after climbing some stairs from which the church was visible. As it was 8:30 or so in the morning there were almost no people, which allowed us to see it with tranquility.

The particularity of this church is not its spectacularity, but in it are the chains of St. Peter and the Moses of Michelangelo. They are impressive, especially the Moses. After this, we went down to the Via dei Fori Imperiali. Since this street is closed to traffic it's nice to walk without the burden of cars.

After Trajan's Forum we headed towards the Altare della Patria, but as it was still closed. We walked down to the Santa Maria in Cosmedin, where the Bocca della Verita is. On Sundays are wedding days in Rome, because that day, we see a lot of couples in wedding dress.

In Santa Maria in Cosmedin there were almost no people, so in few minutes we took the picture with Bocca. Just before taking the picture, when we make the queue, there are some small urns to leave donations. I say this because everyone throws something, more than anything by compromise, since there is a security guard guarding the mouth.

It does not make much of a case. Inside, the church is very small and somewhat abandoned (or that was my impression). There are the relics of Valentine's Day, and a sign for the lovers. On the way up we went to see Altare della Patria. We get to a panoramic elevator that goes up to the highest part of the monument and from which we can see all of Rome.

The truth is that it is worth it, but it is a little expensive. Another curiosity is the flame that is lit on the stairs, guarded 24 hours a day by guards. After seeing the Altare della Patria we walked all the way through Via dei Fori Imperiali, passing through the Colosseum to the Archbasilica of St. John Lateran, which is the Cathedral of Rome. It enjoys the status of extraterritoriality, for which it is owned by the Holy See outside the Vatican. It is the oldest and the highest ranked among the four major basilicas of Rome for being the episcopal seat of the primacy of all the bishops, the pope. This Basilica is awesome.

At the central doors of the cathedral, on the inside, there are two handles in the shape of children. Tradition says that all pregnant women in Rome who want to have a son, go to touch them. Inside, the monumental statues of the twelve apostles of the central nave stand out. In the back square is the largest Egyptian obelisk in Rome with a weight of 455 tons brought from Karnak.

We enter the San Clemente al Laterano. The visit is divided into the three levels on which the Basilica is based. The upper basilica dates back to the 12th century and is the first level. Its main attractions are the mosaic of the apse and one of the first Renaissance works of Rome, in addition to the medieval atrium. The famous mosaic is in rehabilitation so the only thing that can be seen is a large scaffolding that covers it Trist.

The Lower basilica is from the 4th century and is the second level. Here is a marked route. At this level we follow the frescoes that are preserved from different centuries. The visit is very worthwhile. Once the visit to this second level is over, we descend to the mithraeum and structures of the 1st century, which is the third level. A Mithreus was a meeting place for the worshipers of this ancient Eastern divinity. The stone tricliniums on either side of the altar of Mithras, in this grotto-like room, served to celebrate the ritual banquets.

The Scala Sancta is just in front of the Basilica. We cross the Via Domenico Fontana. This staircase is the one that Christ ascended in the Pilate's Court on Good Friday. It is not allowed to climb it walking (only kneeling). It is lined with walnut, to protect it from the wear produced by pilgrims who devoutly climb on their knees. In the coating we can see spaces protected by glass in what were apparently the remains of the blood of Jesus Christ. It's quite an experience to see them.

After this, we go down again towards the Colosseum. We went to the Palatine and waited in a little queue for about 30 minutes. The ticket is also valid for the Colosseum. There is a discount for members of the European Union under 25 years of age. When we left it was already 3 o'clock, so we went to eat.

We ate at a restaurant that is on the street where we go down from Archbasilica of St. John Lateran to the Colosseum. It was right next to a gay bar. After eating, and since we already had the ticket, we entered the Colosseum. We did not have a guide. Some friends who have been recently were with a guide and they told us that it was worth it.

We just wait 5 minutes to enter. After seeing it we went to the hotel to take a shower and to sleep for a while, as we were super tired not before buying some gifts in the area of ​​the hotel. We bought magnets and a keychain. After resting we walked towards Via Nazionale. Afterwards we walked to the Pantheon and the Fontana. Of course, it was an unforgettable experience.

We had an ice cream in the oldest ice cream shop in Rome. I ordered a melon and had even the characteristic strands. We also ordered one of fig that had the seeds! We see the illuminated Fontana and Pantheon, which by the way is the best image that I take of Rome. We go back to hotel.