I leave Bucharest in the direction of Suceava on a night train. The departure have been of a Swiss punctuality. The cabin with bunk beds were really comfortable, which has made me not aware of the trip at all. Twenty minutes before arriving at destination they awaken me. In Suceava I have reserved the hostel. It is located near the train, although far from the center.

First big problem. In Suceava there are two train stops of Suceava and Suceava North. They left me in the first one. Obviously, the hostel is next to the second. When I realize, then I have to take a bus to take me to the city center. Another problem, I have no idea where the center is, because the city has an immense size. It is the third most populated city in Romania, but with low population density.

Overall, I get off when I see a few buildings and shops. There I take a tour to locate the travel offices that make the tour of the monasteries. It had its addresses in the GPS. They are a little apart from each other, but I locate them at least. It's been past 7:00. Well, now it's about knowing how to get to the other train station.

I get off at the last stop and I arrange to look for the hostel in the maps. Well, I have another twenty minutes to go. I see a stone path, all full of potholes. At last I find it. It's been more than two hours since I got off the train. A very nice lady welcomes me into her house. The second floor is a hostel. While chatting she tells me that she is originally from Alba Iulia. What a coincidence! I tell, it's my next destination.

Just when I arrive, a Romanian family comes out of the bedroom I'm going to occupy. They give me something to eat at breakfast. At first I had a single room, but she offers me a bedroom with an attached bathroom. She assures me that I will sleep alone. Before showering, I hear that she calls out loudly to me or something like that.

Actually, it's a South Korean girl. Well, I think, it will be that she want to introduce me to another hosteller. Today I take advantage to visit the city. We go to the bus stop and tell the driver where he has to leave me. The plan is to visit the downtown area and some churches, since the city itself does not have much. Let's see if I remember the names, because I left the map of the city in the hostel for some girls who would stay two more days.

The most central area of ​​Suceava is in the Strada Stefan cel Mare. The square is not small, really. It is pleasant, also, for the amount of terraces and cafeterias that it has. The tourist office is very close. It is a very large building, for the amount of tourists that the population has. There I get the map to guide me.

Most of the churches and monuments visited are on the eastern part of the map. I am even going to separate the sites that I have marked among those that are inside the city and outside it, taking as reference a great avenue that serves as the frontier of my conception of Suceava.

So in the inner part, in addition to the tourist office and the Piața 22 Decembrie, there is also the History Museum (which I have been unable to find) and the ethnographic museum of Bucovina. After the experience in Bucharest, I have limited myself to see it from outside. In the area there are several churches marked on the map, some in works, others somewhat rare.

However, by all accounts, the most beautiful, in this area of ​​the city, is one that was not prominent on the map of the tourist office. It is the Church of Saint Demetrius. Before heading to the other part of the city in my vision of the map, I looked for the restaurant with Romanian food that the girl from the tourist office has recommended to me.

At the point on the map there was no restaurant with that name, but there was one nearby that announced traditional food, very close to the ethnographic museum. There, on a terrace, I ate a chicken soup and rolls of rice and meat, wrapped in a cabbage leaf all watered by Ursus (a beer brand very widespread in Romania). Eating in Romania is almost as cheap as going to the super market.

As I have a coffee mode, I look at the lonely planet guide and I get very close to a cafeteria recommended for its extensive menu of coffees. In less than three minutes I approach and I take a Viennese cappuccino. Once the forces are recovered, I turn to the other part of the map. The idea is to go to the citadel, which is about three kilometers away (it is the furthest point).

But before I approach several churches (all closed). The most beautiful set of Suceava is the monastery of Saint John, declared a World Heritage Site by UNESCO. It is a pity that the exterior frescoes are so worn out. It was time to approach the citadel that is seen in the distance. I venture to follow the map, which leads me through the Saint George's Church, the oldest in the city.

After walking half an hour on trails, I enter into reason. I recognize that I am GPS-dependent. Obviously, it takes me down another very different path. We pass by the Bucovina Village Museum. I have not entered, but later I have repented. Well, on a hill there is the entrance to the citadel. However, it is under construction and no entry is allowed.

As up there is a restaurant, I approach to recover from the effort of the day and I have a drink and ice cream while I read a little while. From there I prepare for the return. I take the bus back and walk a little more. When I arrived, we all get along and have dinner. 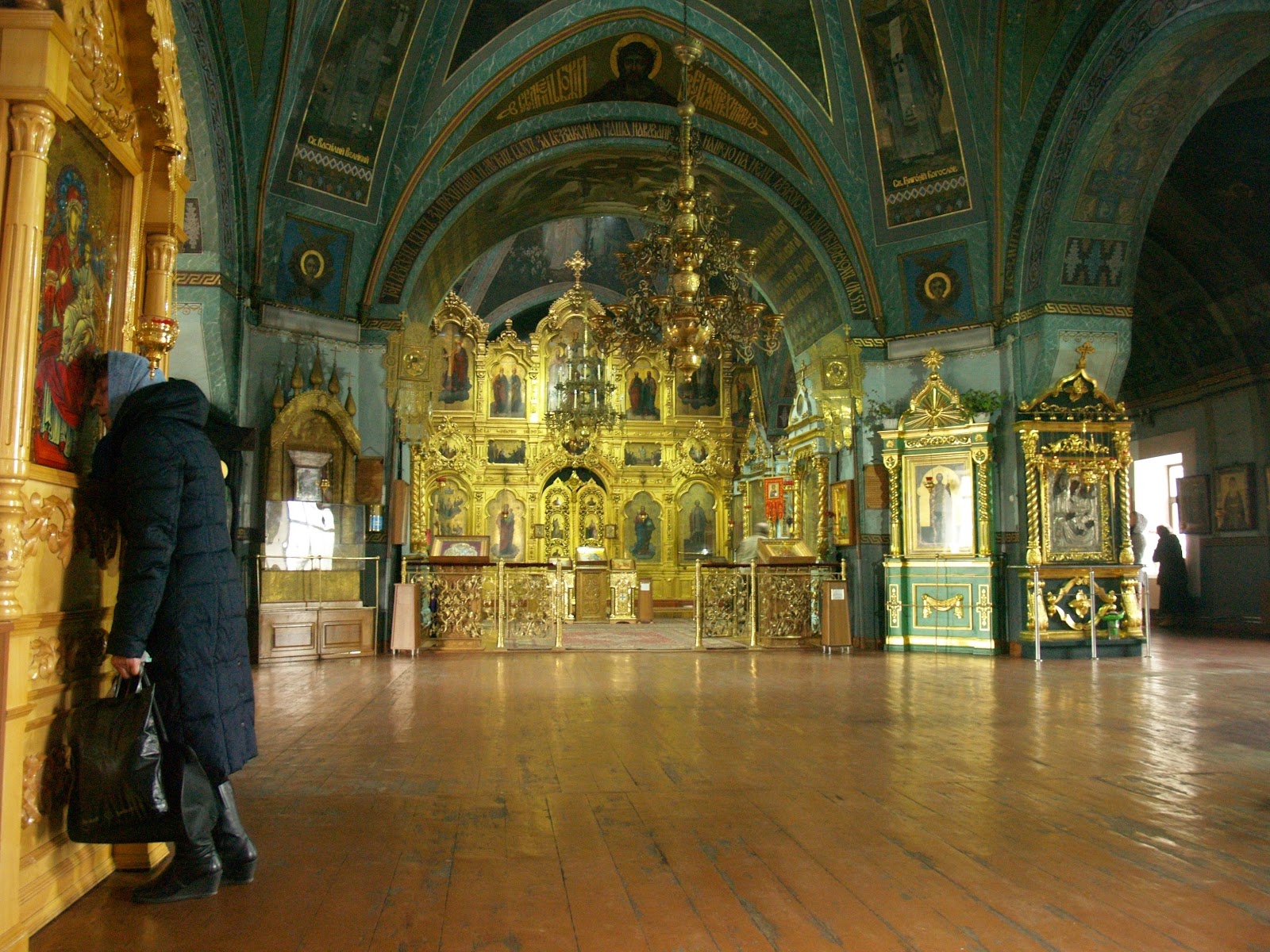 Early in the morning and with a cold that peels, we had a typical Romanian breakfast with potato omelette with onion and bacon, toast with butter and homemade jams, cereals, cheeses, tomatoes and fresh milk. This was one of the best days of the trip as we visited the Monasteries of Bucovina, erected more than 500 years ago and many of them with beautiful paintings on their outer walls.

We started with the Moldovița Monastery and Sucevița Monastery. We were surprised that despite being monuments heritage of humanity, there was no one, neither visiting nor charging entrance. This happened to us in most of the monasteries in this region.

We leave at 9:30 to the gara, the bus station, giving instructions to the driver that he has to let us go down in the previous town. The maxitaxi is quite comfortable, with full air conditioning has left us at Gura Humorului in just under an hour. But once we have gone down, there we have not seen a timetable for the return. It does not matter, we'll manage.

The road that leads to the monasteries (they are in the opposite direction) is marked once, being sufficient. Because it consists of following a road, without deviating until we reach there in one hour.

The first monastery we have gone has been that of Voronet. Both the girls and the boys have to put a kind of skirt if one go in shorts. It is simply spectacular. I do not understand how, in this land of so many invasions and wars, the exterior frescoes of these monasteries have been maintained. Of course, some are in worse condition due to weather effects fundamentally.

The frescoes in the interior seem restored from how good they are, but the ones that impressed me the most were the exteriors. In the north is The Genesis, very deteriorated and in the South the tree of Jesse, is practically intact. However, if the previous one impresses, the one in The Final Judgment leaves me with my mouth open literally.

According to the dogmas of the Orthodox Church the principle of eternity is not governed by consubstantiality, but by descent, that is, from the Father to the Son and the Son to the Holy Spirit . In the same line the orthodox cross and the hand that weighs the souls, is representation of divine justice. Eternity also flows from the river of fire that reaches hell.

The painted monasteries are covered on the inside and outside with very detailed frescoes whose colors are still alive and strong. The truth is that they are impressive. We return walking. When we arrived at Gura Humorului, we did not find the tourist office open, so we still did not know about the bus schedule. As it was already a good hour, we took the opportunity to eat a snack. We have a soup and a huge salad and a beer.

It was already touching towards the other monastery, the one of Humor. It is also 6 kilometers from the city, and we decided to go by taxi, and we would walk again. We spoke with a young taxi driver.

This monastery has paintings of different colors. To the naked eye it is seen that it does not have the blue ones of the previous one. The frescoes are more discolored than in Voronet. Unlike in this monastery, I liked the interior frescoes more than the exterior ones. This time I did not pay for taking photos, although nobody controlled.

In Humor monastery there were also many fewer tourists than in Voronet. From there it was time to make the way back under enormous heat. The landscape of this area reminds me of the green of the Bay of Biscay, with its scattered villages, its well-kept houses. The villagers can be seen working in the orchard, cutting the grass with scythes. The mechanization of the field has not arrived here.

Finally we had time to visit the Dragomirna Monastery, although there was no trace of the sunset since the day was so covered that the sun did not appear anywhere. Finally, after another walk of more than an hour, which is entertaining, we reached the town for the third time. The tourist office is the same as 5 hours before, and is, closed. I have the train schedules written down and coincidentally in about 25 minutes one leaves. Now the problem is finding the station. In short, the station is about 15 minutes away, so we can get there without problems.

The train stops in all possible stations and in 80 minutes we arrive in Suceava. We go to the hostel. Already in the hostel, we have the necessary shower and dinner.