When we board the bus to be taken to the airport, we have an astonished look at the destination. Why do we wish to go to Minneapolis, the most populous city in the state of Minnesota, which is also known by its nickname, the Land of 10,000 Lakes? There Nothing! Doubts come to mind, if our idea is as good as planned. Now it is too late, and we have to go through.

Despite harsh winters, I imagine the presence of thousands of lakes in this Midwestern state that makes it a truly enjoyable place to live. Unfortunately, the travel choices I made did not allow me to dig this Minnesota facet. After a week of Florida, amusement parks and cheerfulness, we are now approaching Minneapolis. We look forward to the start of our tour across the US, again to the much-quoted motto of go west.

Finally we have our luggage and all the formalities in the car rental are done and so we stand in front of the SUV. With a Japanese in the wild west, that's impossible. Such a trip belongs to us a jeep, if not otherwise possible a Chevy or Dodge. Fortunately, at the very end of the long line, we will still find something, a snow-white Grand Cherokee is waiting for us. We load luggage, adjust the on-board computer to our needs and off we go.

However, the first drive does not go far. After a few minutes we reach the Mall of America in Bloomington and our nearby hotel. The motel chain is just across the street from the Mall of America, a 10-minute walk, but the motel also provides a free shuttle to the main entrance. T

he room rate is fine with continental breakfast included, and the rooms are clean. The complex has an indoor pool, which is a bit problematic. In the rooms in the interior, it can be quite noisy, as the noise is amplified by the roof.

After a short rest we direct our steps in the well-known temple of consumption. In order to spare our tired feet from a week's Orlando, we take the hotel shuttle and are in no time in the middle of the bustle of the large mall. After a few minutes, we are completely overwhelmed, where to look first, and what first.

We suffer from overstimulation, try to orient ourselves in the tangle and admire the amusement park in the middle. We did not expect such big scooter coasters and other dizzying rides. Despite the already favorable prices for us, we still keep our buying frenzy in check. We are just beginning to hope for some factory outlets during our trip. Nevertheless, we come back with all sorts of things back to the hotel. 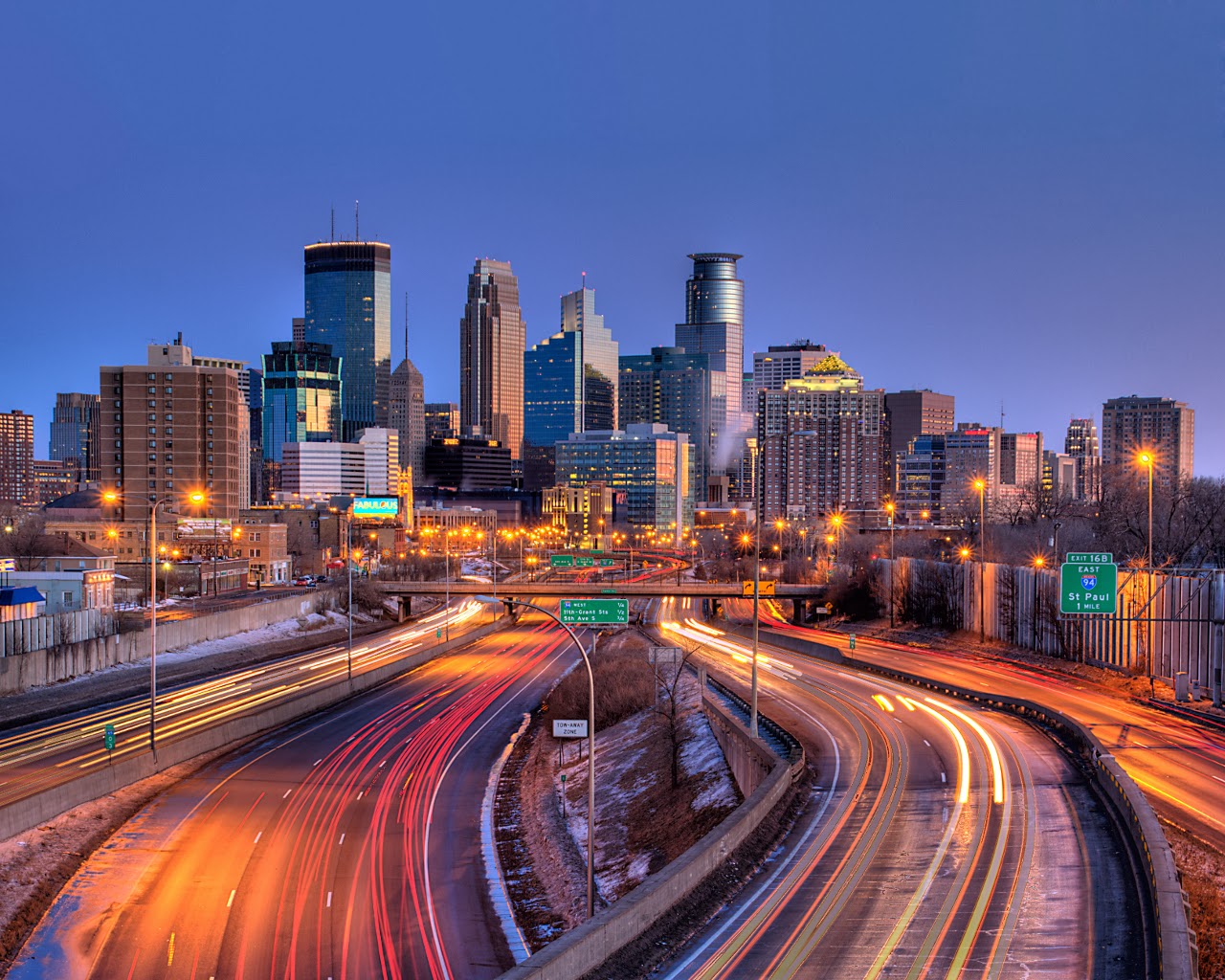 We sleep well and after breakfast. In this new day of our coast to coast trip in the United States and Canada, from the hotel that was located in the outskirts we went towards the center of the city. We take the tram leaving the mall in the city, that takes us directly to downtown.

It's Sunday and in the Metrodom, the stadium of the city is a football game. So we share the Light Railway with many optimistic, purple-robed Viking fans. In the pubs of the city center, things are going everywhere, because people meet before the game for the event brunch.

The Downtown offers the usual picture with a difference to the other American city centers. The commercial buildings, offices and restaurant are connected by a variety of closed, air-conditioned pedestrian bridges, the so-called skywalks. I must admit that downtown seemed quite monotonous, boring and standard, with many fairly uniform office buildings, restaurants and little else.

We go first near the water, more specifically to the Mississippi River, which divides the city, to an area called River Side, apparently quite nice to live, with houses in a half-American neighborhood. The river bank gives the feeling of being an area in the process of transformation and regeneration, with a recent offer of leisure facilities.

Walking we have made the complete return to Lake Harriet, more than four kilometers in about two hours. Although the day was cloudy but it was not raining. It was a very pleasant walk, and relaxing. Along the way there are several piers with fishermen and their rods. There are people paddling in their canoes. We see are a lot of squirrels of different colors and shades, that only flee when we really get close to less than two meters.

We took advantage of the tour to take a hotdog and a bag of popcorn. We sit on the benches that surround the lake to look at the tranquility, breathe trees and feel the water. We find many people jogging, cycling and rollerblading. There are times when it gives the feeling that in places like this it is always Sunday.

In some corners there are small beaches with small children playing in the sand and bathing in the lake. What also surprised us was the large number of beautiful houses that surround the lake. All fantastic, spacious, with terraces overlooking the lake, with very well-kept lawns, lush vegetation. It seems incredible that so many people can have this type of residence, all, besides, without fences with shared gardens.

We were struck by a group of lonely banks that surround the lakes, in their way of walking, and that transmit a certain melancholy. Maybe we are missing, or someone permanently sitting there to not lose that peace. We also passed by Lake Calhoun, very beautiful. We continue on our way to the Lake of Isles.

Before reaching this lake, we took a few meters to visit the Rose garden, a garden that, like the one in San Francisco, offered a multitude of shapes and colors of the rose. We spent a lot of time smelling them and photographing close-ups of the petals. The Lake of the Isles, smaller than the previous ones, has an island in its center, as well as several piers for rowing clubs. There were enough canoes on the lake and people on a beach.

At St. Anthony's Falls, the Mississippi's only natural waterfalls, we take the riverside path to the historic Stone Arch Bridge. It, too, adorns itself with uniqueness as the only stone bridge built across the Mississippi. Built in 1883 by the railroad baron James Hill, today we have a magnificent view of the downtown skyline and St. Anthony Falls.

Across the river, through Father Hennepin Park, we stop for a coffee break on historic Main Street. Afterwards we walk over the Hennepin Avenue Bridge back to the shopping worlds of the many malls in downtown.

The highlight of this sightseeing tour is still ahead of us, at least from my daughter's point of view. Rather accidentally, in search of a certain, quiet village, we come across an absolute fashion heaven. We stand in front of stands and a look at the prices lets forget all our intentions. Loaded with a huge bag, which is monitored from now on the whole holiday with eagle eyes, we start the return journey. This time we meet some quieter Viking fans. The game does not seem to have gone so well.

Through the sprawling suburbs we drive out of the city to finally conquer the unknown US state of Minnesota. After just a few kilometers, it lights up yellow and orange in front of us. Some fruit for the way cannot hurt and so we try ourselves through the apples and other goodies in the sales room.

Most tourists do not seem to pass by in this part of the country. Wherever we go, we get the same questions about where we were from, where we were going and, above all, why? That's not uncommon in the US but on this trip it was quite noticeable. Often our schedule gets mixed up but on the other hand it's not just the attractions that make us travel. People also make the appeal of traveling too.

We also learn a lot about our hosts and their views. It was election season. Most of them tell about their choice between Donald Trump and Hillary Clinton and the predecessor, Barack Obama. About what's going on in the world, the American is not always up to date. In general, this fits in with our idea of ​​Minnesota, which is quite strongly influenced by the Golden Girls and St. Olaf.

We continue our journey to Walnut Grove, the birthplace of the author Laura Ingalls Wilder. Her greatest success, Little House on the Prairie is also well known to us. In the small open-air museum we walk in the tracks. Especially the schoolhouse has done it to us, because we immediately want to push the school bench again. It was just right for a little break in the journey is this museum. There are not many exciting things along the roads disappearing on the horizon.

We're driving west this way just for one reason to fill in the blank stains of missing states on our personal USA map. The landscape has nothing spectacular in itself. There are wide fields, clean and friendly-looking towns, well-kept farms and the next few kilometers of road far visible in front of us.

Of course, Minnesota, Nebraska, or Iowa also have their sights to offer, but the everlasting lack of time and our first major destination, South Dakota, leaves us no time for them.

Now comes what we have been looking forward to since we set foot on American soil. Since we want to sleep in cabins on the way and are self-sufficient, we can stock up on plenty. Sleeping bags, pillows, crockery and all the delicacies we love move into the car and that ends our responsibility. All we have to do is pay, hand over our car keys and find our purchases well stowed in the car.

We spend the night in South Dakota, on the campsite.